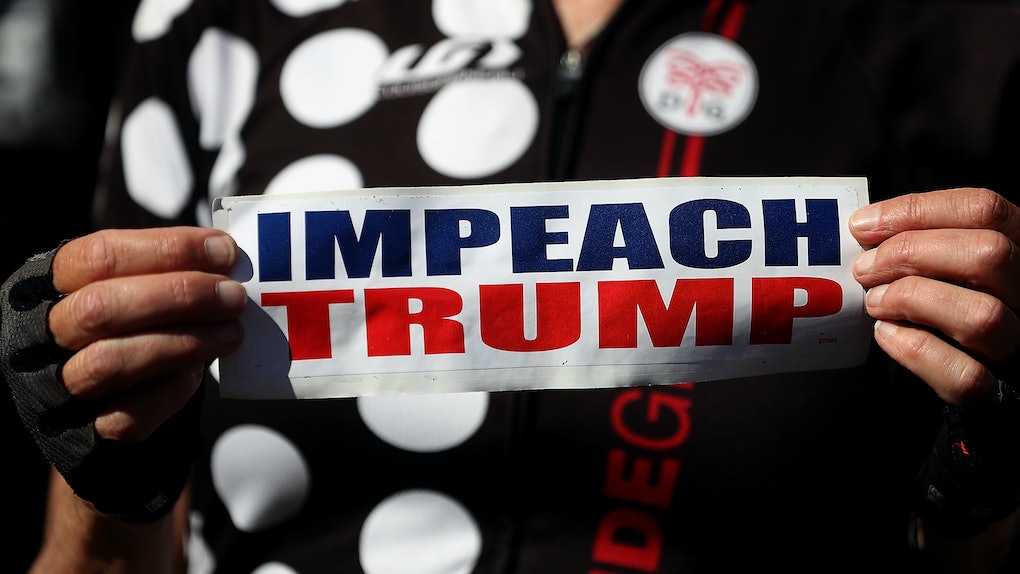 Is the President Impeachable? This Is How Politicians Have Tried To Impeach Presidents, Including Trump

Ever since President Donald Trump entered office, people may be wondering, is the president impeachable? While some may feel there are plenty of reasons to give Trump the boot, what legally constitutes as a violation of the presidency? Here is a look at what it actually takes to impeach a president and how politicians have tried to impeach Trump thus far.

This is how impeachment actually works:

The president, vice president and all civil officers of the United States, shall be removed from office on impeachment for, and conviction of, treason, bribery, or other high crimes and misdemeanors.

The process starts with the House of Representatives. If they vote on any one of those three convictions, (treason, bribery or other high crimes) and at least one passes with the majority vote, the president is considered impeached, but has not yet been removed from office. It's then passed over to the Senate. A trial is presided over by the chief justice of the Supreme Court in the Senate, where a team from the House acts as the prosecutors, and the president has a team of defense lawyers. During the trial, if at least two-thirds of the senators find the president to be guilty, the vice president will take over as the president is forced out of office.

So contrary to Trump's opinions about former President Barack Obama, a president cannot be impeached on the grounds of "gross incompetence."

Only two U.S. presidents have gone through an impeachment process: Former President Bill Clinton was impeached in 1998 and former president Andrew Johnson in 1868. 11 articles of impeachment against Johnson were passed, and two articles for Clinton. However, both of them were acquitted by the Senate. Former President Richard Nixon was charged with obstruction of justice, for allegedly helping to cover up the break-in at the Watergate Hotel. While the House Committee on the Judiciary approved the obstruction of justice article, Nixon resigned before the House and Senate could officially impeach him.

The other case of obstruction of justice, as well as perjury, was former President Bill Clinton, for his later-admitted relationship with White House intern, Monica Lewinsky. Clinton's impeachment did not reach a two-thirds majority in the House.

Who has tried to impeach Trump?

There have been many organizations, as well as politicians that have started campaigns and are actively trying to make impeachment happen.

The first is a campaign called, "Impeach Trump Now" which was started by Free Speech For People, a national non-partisan non-profit. The campaign has over 1.2 million signatures and wants to impeach on the grounds of Trump’s "personal and business holdings in the United States and abroad present unprecedented conflicts of interest."

On Oct. 21, Tom Steyer, a former hedge fund manager launched a campaign titled, "Need to Impeach" in which people can sign up to petition lawmakers. His petition is calling for impeachment of Trump because he was "brought us to the brink of nuclear war, obstructed justice, and taken money from foreign governments." A few days prior to the launch of his website, Steyer sent out a letter to all 50 governors and 2,000 mayors of cities around the country, saying they “have a duty to speak out.”

In May 2017, two members of Congress, Democratic Representative Al Green and Democratic Representative Brad Sherman called for the impeachment of Trump, bringing the proposition the House of Representatives floor. "This is about my position. This is about what I believe. And this is where I stand. I will not be moved. The President must be impeached," Green said on the floor. "For those who do not know, impeachment does not mean that the President would be found guilty. It simply means that the House of Representatives will bring charges against the President." Sherman and Green charged Trump with "obstruction of justice" and "committing high crimes and misdemeanors," relating to the investigation into Russia's involvement with the 2016 election and the firing of former FBI Director James Comey. The representatives brought the articles of impeachment to the house the day after news broke that Trump asked Comey to drop an investigation into his former national security adviser, Michael Flynn.

The two representatives were unable to gather more support with their proposition, considering the House has a Republican majority. However, last week, Tennessee Representative Steve Cohen announced his plans to move forward in the effort to impeach Trump, and has claimed he would rally more support from the Republican party. Cohen reportedly said he will have between seven and 10 co-sponsors, telling MSNBC, “I have one Republican who has said he is looking at it, he’s considering it."

It is no easy feat impeaching the President of the United States, but people are definitely trying. While it would be a monumental move to impeach a third U.S. president, it's important to remember the process of impeachment means Vice President Mike Pence would be next in line for the Oval Office.