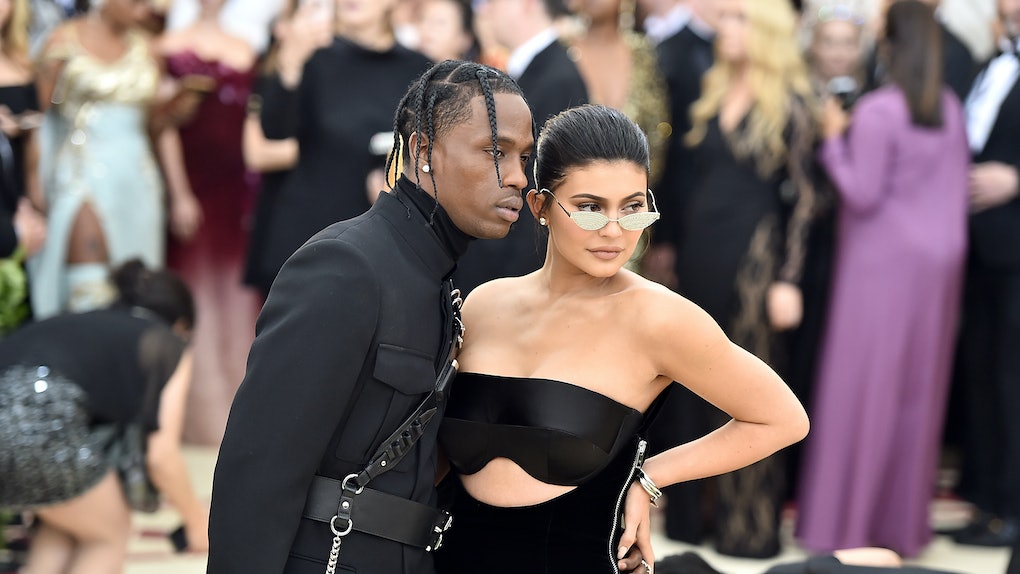 Is Stormi Webster At The 2019 Super Bowl? She May Have Skipped Her Dad's Performance

Its officially Super Bowl Sunday, and the New England Patriots are playing against the Los Angeles Rams at the Mercedes-Benz Stadium in Atlanta. While some people are busy rooting for their favorite team or even hurling insults at the other team, some of us have stayed on the lookout for our fave celebs in the stands or waiting around for the halftime show. Since we know Travis Scott was scheduled to perform alongside Maroon 5 during the Super Bowl LIII halftime show, many people are wondering: is Stormi Webster at the 2019 Super Bowl? If you're a fan of Travis and Kylie's famous baby, I have bad news for you.

Though mom Kylie Jenner is apparently in Atlanta to watch her BF perform at the Super Bowl, Stormi Webster is not actively in the crowd. According to a post shared to Kylie's Instagram, Stormi happily watched her dad perform in the half time show from the comfort of a warm home and flat screen TV. Baby's First Halftime Celebrity Appearance? Honestly, given everything going on on the field, it makes sense that the makeup mogul and Instagram star might prefer to keep things chill for her just barely one-year-old.

Though it's unclear if Kylie is a football fan, the reality TV star and entrepreneur went down in Super Bowl history last year when she announced the birth of Stormi on Super Bowl day via a YouTube video called To Our Daughter. While pregnancy rumors about Kylie had been circulating for some time, she decided to officially reveal her journey with pregnancy after giving birth. Many people joked that Kylie won the 2018 Super Bowl which, to be honest, was kind of true.

Kylie's baby video from Super Bowl Sunday 2019 might not be the only time Kylie-related news takes over the Super Bowl. Many people speculated that Scott would propose to Kylie during the Super Bowl this year. While it certainly didn't happen during the halftime show, there's still time left in the game!

Back in December, Scott confirmed to Rolling Stone that he planned to propose Kylie "in a fire way," and what could be more fire than performing during one of the most watched television events in the country? Though many Twitter users agree with the theory, one person in particular made a very specific prediction that didn't come true but it would have been pretty cool if it did. Twitter user @sammy__rozay wrote:

Super Bowl halftime show. Maroon 5 & Travis Scott perform a Girls Like You remix. Travis takes a knee. Silence fills the arena. Is this the Kaepernick tribute that finally changes things? No. He pulls out a ring. He calls Kylie onstage. He proposes. The beat to Sicko Mode drops.

Kylie and Scott have a long and involved relationship timeline, and apparent connections between the two go back to 2015 when Kendall Jenner attended Scott's album release party at a nightclub in New York. Though there were initial rumors that Kendall and Scott were dating, those rumors were put to rest when Kylie and Scott hanging out more and were spotted together at Coachella in April 2017 and at the Met Gala in May 2017. That summer, the two got matching butterfly tattoos on their ankles which all but confirmed their relationship. Just under a year later, Stormi Webster was born and the rest is history.

It probably isn't a huge deal that Stormi isn't actually at the game since will likely not remember her first Super Bowl anyway. Maybe we'll see her at next year's game. Something to look forward to!

More like this
Here's Why EXO's BAEKHYUN, CHANGMO, & Raiden's "Runner" Is The Perfect T1 Theme Song – EXCLUSIVE
By Michele Mendez
These Tweets About BTS' 'Bang Bang Con 2021' Sum Up The Epic Performance
By Cianna Garrison
Prince Philip, The Duke of Edinburgh, Has Died At The Age Of 99
By Noelle Devoe
Stay up to date