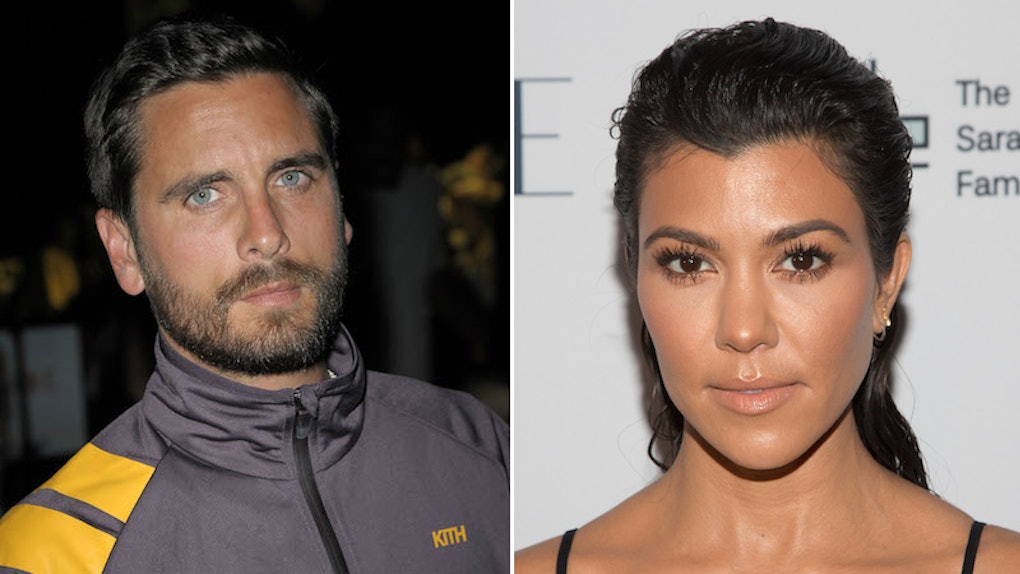 Is Scott Disick Still In Love With Kourtney Kardashian? He's No Longer "Hung Up" On His Ex

Is it just me, or are Scott Disick and Kourtney Kardashian kind of the Ross and Rachel of our time? HAHA, THAT'S A JOKE. The truth is, these two have a winding, long, complicated history that involves three children and nearly a decade of on-again, off-again romance. After officially calling it quits in 2015, they both have "moved on," but I can't help but feel like Disick would get back together with Kourt if he could. Fans are always wondering: Is Scott Disick still in love with Kourtney Kardashian? If you ask me, the answer is probably, but according to a new report, he's officially over his reality star ex. Elite Daily reached out to both Disick and Kardashian's teams for comment on the status of their relationship, but did not hear back by the time of publication.

Keeping Up With The Kardashians fans have watched for years as Disick repeatedly proclaimed his love for Kardashian followed promptly by repeatedly screwing everything up. Part of me thinks that when Kourt pulled the plug for good, Disick didn't really believe her. Now, Kourtney just celebrated her one-year anniversary with Younes Bendjima and Disick is just behind them with his much younger girlfriend, Sofia Richie. In fact, Richie and Disick just celebrated the reality TV star's 35th birthday together with his three children, Madison, Penelope, and Reign — proving he really might be in it to win it with the young model.

According to an insider, Disick is no longer "hung up" on Kourtney. The source told People magazine, "Scott and Kourtney are on better terms. He was hung up on Kourtney forever and really wanted to make that relationship work, but he’s finally come to terms with the fact that she’s moved on." The insider added Kardashian and Disick are "in a really good place."

So much of the conflict between the parents seemed to stem from Disick's erratic partying. Disick was notorious on KUWTK for drinking too much and going too hard, making him an unreliable partner for Kardashian. While it seemed they both wanted to work it out for a long time, Kardashian ultimately decided it was in her best interest to find a way to peacefully co-parent with Disick but no longer date him. Today, Disick seems to have calmed down a lot. The insider told People, "He’s not partying like he was just a year ago and seems to be in a healthier place mentally and physically. Everyone in the family is really happy with how he’s doing lately."

The even better news is it seems like Kardashian has given Richie her blessing regarding her children. Obviously, it's important everyone is on the same page about how to raise the kids and a new source claims Kardashian "trusts" Richie. "It helps that Kourtney now trusts Sofia," the source said. "The kids are allowed to spend time with her. Sofia likes having them and helps Scott. So far, the kids are giving Kourtney good reports about Sofia.” The source added Disick has chilled out on his partying and "spends a lot of time with his kids" adding, “Sofia has shown over and over again that she is willing to stay with Scott even when things are not great — but Scott is doing well lately." Elite Daily reached out to Kardashian's team about reports regarding her feelings about Sofia getting close to her kids, but did not hear back by the time of publication.

As a birthday tribute to Disick, Richie posted the following photo on Instagram with the caption: "Happy Birthday babe! Thank you for being you. Love you"

Sure, there's a lot to be said for the fact she is closer in age to Disick's 8-year-old son, Mason, than she is to the 35-year-old himself, but, then again, it's none of my business, is it?

BEING A CELEBRITY IS WEIRD, Y'ALL!