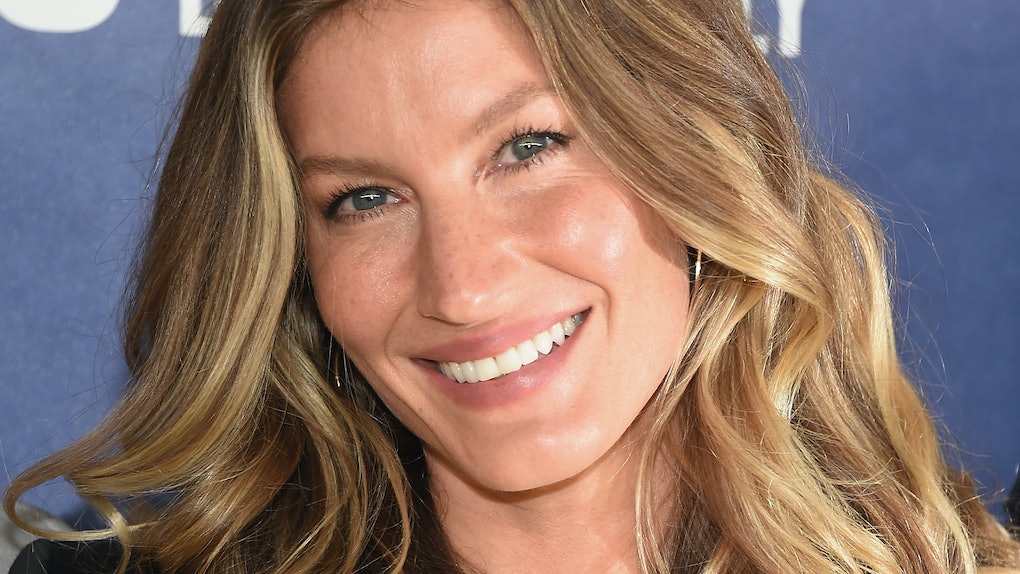 Is Gisele Bundchen At The Super Bowl? She’s Repping Her Hubby With Her Look

New England Patriots quarterback Tom Brady is set to play against the Philadelphia Eagles at the Super Bowl LII in Minneapolis, Minnesota today. No matter which team you're rooting for (that is, if you have an opinion that goes beyond, "Go sports!"), you have to admit that Brady's family with supermodel Gisele Bündchen is insanely cute, and you might want to catch a glimpse of them in the stands. So is Gisele Bündchen at the Super Bowl this year?

Yes! Of course. Scroll down for more information on Bündchen's Super Bowl attendance over the years, but let's just put it this way: she's a super supportive wife and this game is a huge deal for her family. Of course she's in Minneapolis to cheer on her husband Brady from the sidelines.

Two hours before the game's official start, she posted a photo with her crew in black t-shirts bedazzled with the number 12 in red, white, and blue rhinestones — that's Brady's number and the Patriots' colors. You can see Bündchen in the top right corner of the photo and Brady's mom, Galynn Brady, third from the right in the top row of supporters. Vivian Brady, Bündchen and Brady's daughter, is in the center of the bottom row. What a sweet, proud family.

While the Patriots obviously had a very strong season, their spot at the Super Bowl wasn't officially confirmed until Sunday, Jan. 21, when the team defeated the Jacksonville Jaguars in a triumphant 24-20 win. Bündchen celebrated her husband's big win on Instagram by posting an adorable photo of her wearing a "TEAM BRADY" beanie and kissing him on the cheek. "What a game!!!" she captioned the pic. "Congratulations my love! So happy for you and your teammates! #gopats"

Bündchen and Brady were set up on a blind date by a mutual friend in December 2006. They first met for dinner in New York City following a Patriots-Dolphins game. As Brady told Details in 2009, "This friend told me he knew a girl version of me," while Bündchen reportedly chimed in from the background, "And he said to me he'd found a boy version of me." (I'm sorry, are you dying? This is extremely cute.)

The model and the athlete married on February 26, 2009 in Santa Monica, California. Together, they have two children — a son named Benjamin born in 2009 and a daughter named Vivian born in 2012. Brady also has a son named Jack born in 2007 from his previous relationship with actress Bridget Moynahan.

Two months after the couple first met, the Patriots lost to the New York Giants 17-14. Bündchen wasn't at the actual game (too soon, ya feel?), but she was spotted hanging around the Patriots' locker room after a game earlier that season, just a month after she told the Boston Herald:

Tom Brady, definitely not too shabby. He’s pretty cute. All-American, that’s a good way to describe him. He’s cute, but if he has a girlfriend, he’s gay to me. There are too many men in the world to go after a man who has a woman. Life is too short.

(That woman? Moynahan, who dated Brady for two years until December 2006. In February 2007, she announced that she was more than three months pregnant with Brady's child.)

Five years later, Brady and Bündchen were a married couple. Not only did Bündchen attend the game, but she sent an email to friends and family requesting positive energy and prayers for his team's victory (it was obtained and leaked by Page Six).

This Sunday will be a really important day in my husband’s life. He and his team worked so hard to get to this point and now they need us more than ever to send them positive energy so they can fulfill their dream of winning this Super Bowl… So I kindly ask all of you to join me on this positive chain and pray for him, so he can feel confident, healthy and strong. Envision him happy and fulfilled experiencing with his team a victory this Sunday. Thank you for your love and support. Love, G :)

Despite all the good vibes, the Patriots lost to the Giants again, 21-17. After the game, Bündchen voiced her frustrations about her husband's teammates, and the moment was unfortunately caught on camera. She was overheard saying, "You’ve to catch the ball when you’re supposed to catch the ball. My husband cannot f*cking throw the ball and catch the ball at the same time. I can’t believe they dropped the ball so many times."

Two years later, the Patriots beat the Seattle Seahawks, 28-24. After the big win, Bündchen rushed onto the field with their son Benjamin to congratulate Brady. Cute!

Last year, the Patriots came from behind to beat the Atlanta Falcons, 34-28. Bündchen attended proudly and embraced Brady with their daughter Vivian after the Patriots' big win. Go team!

Given the Brady-Bündchen family's tight bond, it's no surprise that she continues to show her support for her husband by attending the Super Bowl whenever he plays. And the love goes both ways: after her final runway show at Saõ Paulo Fashion Week in April 2015, Brady took to Facebook to share an emotional note.