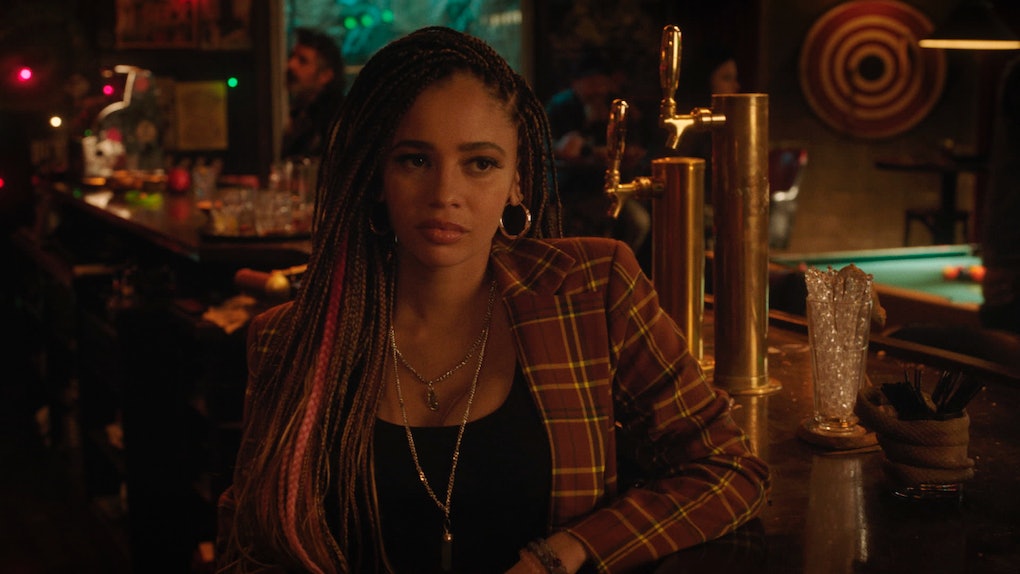 In 'Riverdale' Season 5, Toni Topaz Is The Black Superwoman Without A Cape

I was barely a teen when I started reading Archie comics. Picture me, a Black girl from the South Side of Chicago, getting excited to go to the supermarket just to read more of the zany adventures of Archie and his (very white) crew of friends. So when it was announced the Archie comics were being adapted into Riverdale, a TV series on The CW, the little girl inside of me jumped for joy. My excitement continued to grow once Toni Topaz (Vanessa Morgan) was introduced on screen in Season 2. Riverdale was finally getting the extra flavor it needed.

It’s not that there were no characters of color on the show before Toni, but their storylines are often pointless or just used to push their white counterparts' narratives forward. For example, Peaches ‘N Cream (Bernadette Beck) is mostly seen popping her gum in the background, looking like the racist stereotype of an angry Black girl. Not only is her name off-putting (naming Black people after flavors and food is racist), but she also seemed to only serve as a surface-level diversity quota. Even fine-ass Jordan Calloway, who played Chuck Clayton in Seasons 1 and 2, couldn't get proper character development.

Unfortunately, Toni’s introduction into Riverdale didn’t do much to remedy Riverdale’s problems. As an avid comic and book reader, I’m no stranger to characters’ stories being changed for screen adaptations. However, with Toni, everything that made her cool in the comics seemed to be an afterthought when she joined the show. Toni Topaz — the pink-haired, bisexual, sarcastic hot girl who loves cupcakes and could out-eat Jughead in the comics — came off very different on my television screen. She should have been a firecracker, but she was just another Black character who felt like a placeholder for the writers until another story developed.

Before Season 5, Toni’s entire identity seemed to be wrapped up in her proximity to the whiteness and social status of her on-off girlfriend, Cheryl Blossom (Madelaine Petsch) — more on that later. However, recent events led to the powers-that-be at Riverdale vowing to make some changes to Toni’s character. But are they following through on those promises? The first half of Riverdale Season 5 has certainly given Toni more screen time, but as of the mid-season finale on March 31, the storytelling remains problematic.

I’m not the only one who felt Toni’s lack of character development up through Season 4 was an issue. On May 31, 2020, shortly after Season 4 had wrapped and at the start of a reenergized Black Lives Matter movement, Morgan used her Twitter to express her frustrations as a Black woman in Hollywood, noting specifically that Toni deserved to be more than a “bisexual and biracial” token. “[I’m] tired of us also being used as sidekick non-dimensional characters to our white leads. Or only used in the ads for diversity but not actually in the show. It starts with the media,” she wrote. While replying to fan tweets during this time, Morgan also claimed she was paid the least out of all the series regulars. (Elite Daily reached out to The CW for comment on Morgan's tweets, but did not hear back in time for publication.)

It seemed Morgan’s complaints were heard loud and clear. On June 4, Roberto Aguirre-Sacasa, the creator of the series, publicly addressed Morgan’s statements on social media, writing, “We will do better to honor [Morgan] and the character she plays … We know where the work must happen for us. In the writer's room." As a fan, it was refreshing to see Aguirre-Sacasa embrace Morgan’s criticisms straight-on with no chaser. It gave me a glimmer of hope that Toni and the other diverse characters on the show would break out of the typical shell I'm used to seeing BIPOC, LGBTQ+, and disabled characters in. With the coronavirus pandemic ongoing and Morgan being pregnant IRL, I was ready to see the writers of the show get creative to give Toni more visibility and agency in Season 5.

Unfortunately, the way I see it, Aguirre-Sacasa hasn’t sufficiently followed through on his promise. In this latest season, the long-awaited time jump brought viewers up to speed on what Riverdale (both the fictional place and series) has become seven years after the main characters graduated high school... and it's not pretty: Riverdale has turned into a poverty-stricken, lawless town that's crumbling down further every day. Archie (KJ Apa) and his pals are long gone, off pursuing various forms of success. During all this turmoil, it’s Toni who is trying to save Riverdale from gentrification and the evils of capitalism caused by Hiram Lodge. Essentially, Riverdale made Toni Topaz the magical negro.

And, oh yeah, she’s also doing this all while pregnant. Where is Toni's support system? Why is a pregnant, overworked, underpaid Black woman single-handedly convincing those who benefited the most from Riverdale to help its most vulnerable citizens? Toni's new arc may be more important than ever — I mean, no one else could bring the Core Four back to their hometown like she did — but it’s also, unfortunately, a reflection of how society views Black women. If something is broken, call a Black woman. If our lives are at stake, call a Black woman to save us from ourselves.

Not only is Toni spearheading the mission to save Riverdale (while Archie gets much of the credit for it), but there’s also the issue with her ex-girlfriend, Cheryl. No longer the apple of Cheryl’s eye, Toni experiences a different side of her ex — and even though they’re not together, the power imbalance between them is still toxic AF. Throughout Season 5, I see Cheryl display a combination of antics that combine manipulation, narcissism, and her privilege into a deadly cocktail of gaslighting and jealousy. Toni has to constantly prove her loyalty to the town of Riverdale while Cheryl has the luxury to isolate herself at home, only coming out to help when she can throw money at a problem or exercise her power, like when she took control over the Vixens from Toni. Throughout the season so far, Toni’s taken the high road while enduring microaggressions from her supposed friends. Why can’t she demand better for herself?

Toni’s ~enhanced~ storyline this season is heavy-handed at best and triggering at worst. In Episode 8, “Chapter Eighty-Four: Lock & Key,” Toni reveals the truth behind her mysterious pregnancy: She has a medical condition that will make it hard for her to have kids later in life, so she selflessly decides to be a surrogate to Fangs (Drew Ray Tanner) and Kevin (Casey Cott), who want to start a family together. Of course, if a mother has a higher-than-average chance of having a complicated pregnancy like Toni does, it would be important for her to stay as stress-free as possible. Unfortunately, in Riverdale, the expecting Black mother doesn't get much relief.

As all too many Black women know firsthand, the medical community fails expecting Black mothers by holding racial biases against them. According to a 2020 report from the American Diabetes Association's 80th Scientific Sessions, Black women are more than three times as likely to have a maternal death than white women in the United States. My heart races thinking about whether Toni will endure birthing complications while Riverdale is still being targeted by Hiram. I would hate to see Toni’s story come to an end by something as traumatic as that. On the other hand, the show could fully ignore the realistic ordeal that Black women face regarding their maternal health and instead allow Toni to have a peaceful and beautiful birth. At this rate, I’d rather have the latter because she deserves happiness without strings attached.

The problematic aspects of Toni’s character development don’t end there. Toni is over-sexualized in the town newspaper in an attempt to discredit her as she tried to save Riverdale High. It’s yet another racist, dangerous trope; Black people — especially Black women — are often over-sexualized more than their white counterparts. In a show that’s typically very pro-sex (there was a literal sex party this season), it feels as if the writers fell back on the unwed, pregnant Black woman stereotype to push forward a larger, arguably unrelated narrative. Yes, I want Toni to win and I love that she is taking care of business while making sure Riverdale stays afloat. But on the other hand, I'm asking myself, who is taking care of sis?

I appreciate Toni having a bigger presence in Riverdale this season. But when new episodes return in July, I want Toni to come back with some fire in her. I want that witty, badass woman people will think twice about trying to cross. I want Toni to be recognized (and, more importantly, paid) for all she’s done to improve the town. I want Toni to have friends who will be willing to save her as much as she saves others. And, most importantly, I want her to exist in Riverdale without continuing to have to prove she belongs there.

More like this
As @Royal_Suitor, Here's Why I'm Dedicated To Defending Harry & Meghan
By R.S. Locke
Ellen Pompeo's Response To Jesse Williams Leaving 'Grey's Anatomy' Is Emotional
By Cianna Garrison
'Grey's Anatomy' Quotes That Will Heal Your Broken Heart
By Alexis DeCarvalho and Lexi Williams
Stay up to date