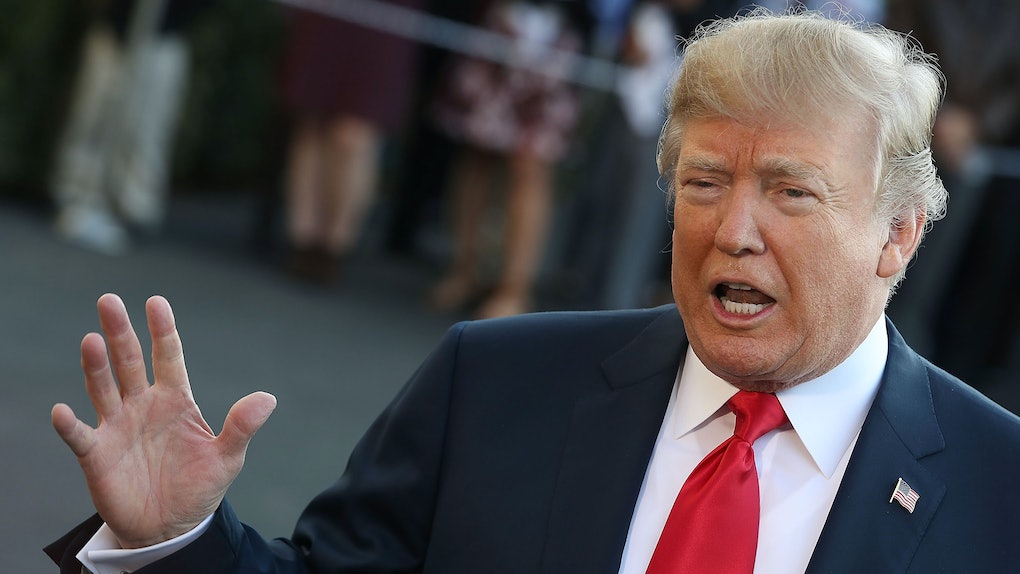 If Trump Is Impeached, Will He Have To Leave Office? It's A Process

Since the start of Special Counsel Robert Mueller's investigation into whether or not President Donald Trump's 2016 campaign colluded with the Russian government in order to sway the result of the presidential election, discussions surrounding the possible impeachment of Trump have only increased. While we still don't have an official conclusion from that investigation, it's still worthwhile to consider what the potential consequences Trump will face should he be charged with any sort of crime or ethical failure. That, in turn, begs the question: If Trump is impeached, will he have to leave office?

When and if Trump actually goes through the impeachment process depends on a number of factors. First off, we are still awaiting the outcome of Mueller's investigation, so Trump hasn't formally been accused of any high crimes — which, you know, would probably come ahead of any impeachment. According to the Constitution, grounds for removing the president (or any federal official) are as follows,

The President, Vice President and all civil officers of the United States, shall be removed from office on impeachment for, and conviction of, treason, bribery, or other high crimes and misdemeanors.

So to answer your question, if a sitting president is fully impeached he (or she) is supposed to be removed from office automatically, and that removal is effective immediately — however, there are some caveats to that, which I'll get to in a bit. Barbara Radnofsky, the author of A Citizen's Guide to Impeachment, said in an interview with Elite Daily in September 2017 that there are only two penalties for impeachment. "The first is removal from office. And when you’re convicted, that removal is automatic," she said.

The second penalty, which Radnofsky asserts only happens in rare occurrences, comes from a second vote in the Senate, which determines whether or not the convicted offending officer would be "be barred from future officeholding." If Trump ended up going through the impeachment process and were removed from office, there's a chance that this might be considered, and Trump wouldn't be able to run for office again.

However, technically speaking a president can still be impeached and not be forced out of office, as America has seen in the past. President Bill Clinton was voted to be impeached by the Republican-led House of Representatives on Oct. 8, 1998 on charges of lying under oath and obstruction of justice in a simple majority vote. But when the impeachment process moved to the Senate, where a two-thirds majority is needed in favor of impeachment to formally remove the president from office, Clinton was acquitted of both lying under oath and obstruction of justice, with 55-45 and 50-50 voting results respectively. The vote meant he stayed in office, finishing out the final year and a change of his term.

But can Trump be indicted by Mueller? The question of whether or not a sitting president can be indicted and taken to court while in office has no real answer. Why? Well, there isn't really any precedent for such a situation. It's been argued that Mueller won't actually indict Trump, because it might just not be sensible of him to do so.

The Justice Department’s Office of Legal Counsel (OLC) determined in 1973 that the president is constitutionally immune from indictment and criminal prosecution while in office (although this question continues to be debated by legal experts). Therefore, some experts argue that Mueller would not go against his own office's rulings and indict Trump. He could, however, prepare a report that detailed the findings from his investigation, that could warrant the House to introduce articles of impeachment.

So although the president likely cannot be charged with a crime while in office, if he (or she) does get impeached and once again becomes a private citizen, they could be open to trial and conviction just like anyone else.

Even though Mueller's Russia probe hasn't reached its end, the events that have unfolded since he was appointed as special counsel on May 17, 2017 have political analysts speculating that the probe could mean big trouble for Trump. The decision to appoint Mueller came from Deputy Attorney General Rod Rosenstein, following the abrupt firing of the former FBI James Comey on May 9, 2017. According to The New York Times, this decision by Rosenstein was also made in part due to a disclosure that Trump allegedly asked Comey to drop the investigation into his former national security adviser Michael Flynn.

Since then, Mueller has either indicted or gotten guilty pleas from 19 people in the Russia probe, including four former Trump advisers, 13 Russian nationals, three Russian companies, one California man, and one London-based lawyer. Five of the 19 have plead guilty, including Flynn and former Trump campaign foreign policy adviser George Papadopoulos.

In addition to the indictments and guilty pleas, on April 9, the FBI raided the office and residencies of Trump's personal lawyer Michael Cohen. The search warrant was reportedly granted to prosecutors in New York in part thanks to a referral by Mueller, and was signed off on by the Deputy Attorney General Rod Rosenstein. While this action has no direct relation to Mueller's probe, this connection indicates that Mueller might have discovered information in his investigation that's serious enough to warrant the raids.

Despite all of this, there's still no telling what Trump's fate will be after the investigation is over. But I'm sure political experts and pundits will continue to debate over what's going to happen until the cows finally come home. So to speak.