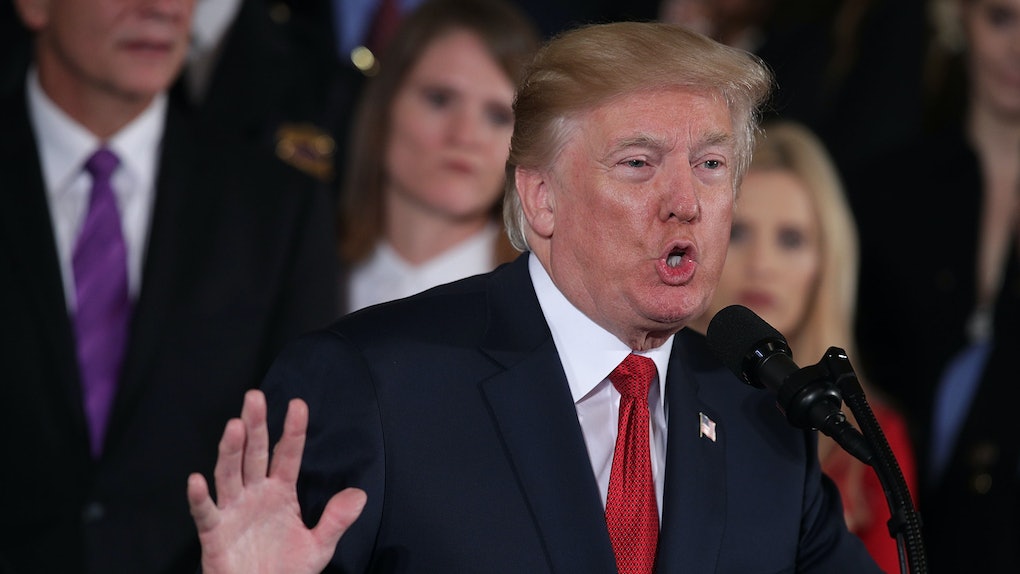 Who Is George Papadopoulos? Trump Campaign's Foreign Policy Adviser Pleaded Guilty To Lying To The FBI

On Monday, Oct. 30, another Trump campaign member came forward to the FBI. One of Trump's campaign aides pleaded guilty to lying to the FBI about a Russian contact. The news comes on the heels of reports that President Donald Trump's former campaign chair Paul Manafort surrendered to the FBI amid charges against him and Rick Gates, an associate. The charges were the latest development from an investigation into Russian connections with Trump's campaign team.

The New York Times reported at about 10:30 a.m. ET that the Trump campaign aide, George Papadopoulos, had turned himself in, pleading guilty to lying to the agency about his contact with a Russian professor who had connections to the Kremlin. Papadopoulos served as a foreign policy adviser to the Trump campaign, and, based on official documents, had been deeply connected with the campaign's Russian connection since the spring of 2016.

Per the court document detailing the guilty plea, Papadopoulos told the FBI that he'd met with the Russian professor prior to becoming a member of Trump's campaign. But, the document, reads,

In truth and in fact, however, defendant [Papadopoulos] learned he would be an advisor to the Campaign in early March, and met the professor on or about March 14, 2016.

The document goes on to explain the circumstances under which Papadopoulos onboarded with the Trump team. The statement implies that, from the get-go, Trump's campaign had Russia very much in mind. It reads,

Based on a conversation that took place on or about March 6, 2016, with a supervisory campaign official ... defendant [Papadopoulos] understood that a principal foreign policy focus of the Campaign was an improved U.S. relationship with Russia.

Per the document, Papadopoulos met on March 24, 2016, with the professor, who introduced him to a Russian ambassador as well as an unnamed "Female Russian National," who was described in an email as "Putin's niece."

The following month, per the document, the Female Russian National responded to emails from Papadopoulos expressing her support for increased relations between the two countries. She allegedly wrote to Papadopoulos,

As mentioned we are all very excited by the possibility of a good relationship with Mr. Trump. The Russian Federation would love to welcome him once his candidature would be officially announced.

Over the course of the year, numerous contacts with Russian individuals and Papadopoulos regarded "dirt" on candidate Hillary Clinton and off-record meetings.

Manafort surrendered himself Monday morning to the FBI, facing numerous charges. The charges included conspiracy against the United States and money laundering — in his case, more than $18 million worth — which can carry a 20-year prison sentence. Per the Times, Gates has also surrendered, and both are set to appear in court on Monday afternoon.

Separately, evidence has been building to suggest Russian interference in the U.S. election. On Sept. 6, Facebook came forward with information that it had sold more than $100,000 worth of ads to Kremlin-linked companies during the 2016 campaign season, many of which were purchased by fake accounts.

The indictments and court documents released Monday focus on Manafort, Gates, and Papadopoulos, with no mention of meddling in the 2016 election or of Trump, though they imply that Manafort and Gates acted with others. The potential bearing on any others connected with Trump — or Trump himself — remains unclear.