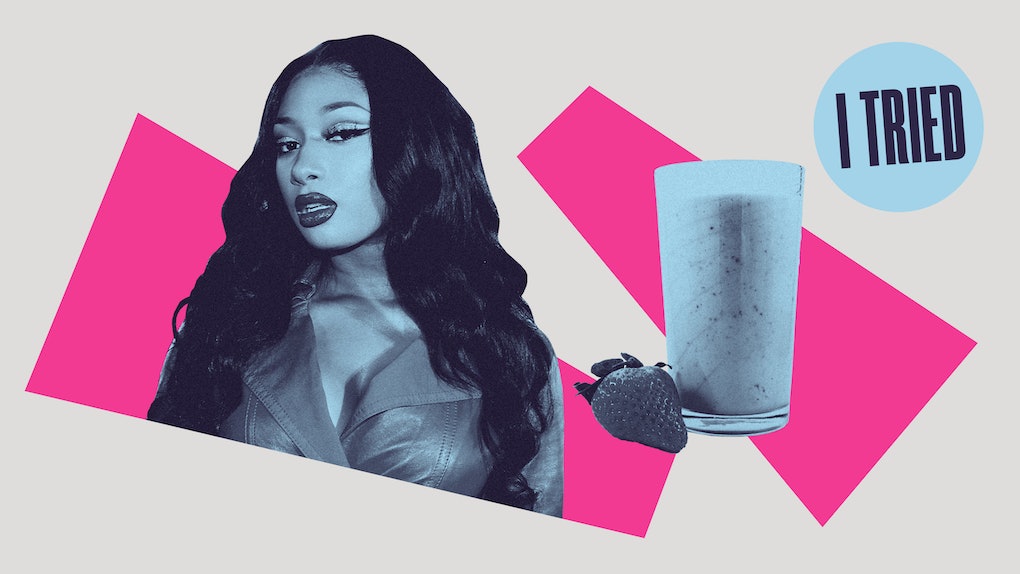 If Megan Thee Stallion has taught us anything, it's that being a Hot Girl™ isn't just a trend, it's a lifestyle. In early 2021, the Grammy-winning rap icon underwent a personal journey she dubbed Hottie Bootcamp, during which she shared videos of herself practicing wellness habits like drinking more water and switching up her booty workout. Amid all this, there was one element from her bootcamp that really stuck out to me: a delicious morning refreshment whipped up by her trainer. After taking some notes on the ingredients, I decided to try Megan Thee Stallion's Hot Girl Smoothie for myself.

On Jan. 19, Megan shared an Instagram video showing off her new Hottie Bootcamp regimen to fans. The post introduced her trainer, Timothy Boutte, who arrived at her house with a grocery haul to stock her fridge with — including ingredients for Megan's Hot Girl Smoothie, which Boutte said he makes for her every morning before her workout.

In the video, Boutte walked viewers through every delicious ingredient in the smoothie recipe, making it easy for fans to recreate at home. As a loyal smoothie fan, I'm always looking for a sweet morning pick-me-up to help me get my daily fruits and veggies in. I'm also always down for ways to keep my skin looking fresh, and this smoothie's combo of fruit (which contain strong antioxidants) and kale (which is chock-full of skin-brightening vitamins like C and E) seemed like it could help in that department, too.

Megan gave the drink a big thumbs up in her video, and that was more than enough to inspire me to make it myself.

Here's how it went for me:

While lots of smoothie recipes are stacked with fancy protein powders and special ingredients you might not have lying around your house, Megan's recipe is refreshingly accessible. Here's the full list of ingredients:

I could find pretty much everything I needed at the local grocery store or in my own pantry. The only change I made was substituting Jif creamy peanut butter for organic peanut butter, since that's what I already had at home. In the video, Boutte didn't specify the exact measurements for any of the smoothie ingredients, so I based most of mine on a similar kale, banana, and peanut butter smoothie recipe I found online. Here's what I came up with:

Making the smoothie took less than five minutes. First, I added the almond milk and ice cubes to my blender. Next, I sprinkled in the kale and a tablespoon of peanut butter. Finally, it was time for the fruit: I peeled my banana and cut it into chunks, measured out a cup of strawberries and a cup of blackberries, and combined everything. Then I blended it all together, and voila! I'm doing hot girl sh*t.

I will admit I was a little surprised by the color of the smoothie. Megan's was a creamy white, while mine ended looking deep purple. I'd guess it's because I added more blackberries, but no complaints! It was an IG-ready smoothie if I've ever seen one.

Also, the amount of ingredients I used yielded a lot of smoothie, so feel free to cut down the measurements if you just need a single serving. But if you want a big ol' freak of a smoothie like mine, go for it.

Every time I've tried a smoothie with bananas in it, that's been the dominant flavor of the entire thing, and the Hot Girl Smoothie was no exception. However, what set this one apart for me was the creamy peanut butter aftertaste it had. It gave the whole thing an extra burst of flavor that most super-sweet fruit smoothies lack, and I was all about it.

Usually, I get annoyed when smoothies have little bits of ingredients that get stuck in my teeth and the back of my throat while I'm drinking them. There were some seeds and tiny chunks of kale in the Hot Girl Smoothie, but they went down easily. In fact, I actually enjoyed the little bit of crunch the kale added — it was a literal fruit salad!

My favorite thing about this smoothie is how filling it was. I drank it in the late morning and still felt full and refreshed when lunchtime rolled around a few hours later.

Megan's smoothie is way more affordable than most of the other recipes I've tried over the years, and it's so easy to make, I can definitely see it becoming a major staple in my own hot girl regimen. I'll continue soaking up whatever advice Tina Snow herself has about living your best life, and if the success of this smoothie is any indication, Hot Girl Summer 2021 is already off to an amazing start.

More like this
I Tried Singing While Running Like Miley Cyrus & OMG, My Lungs
By Rachel Varina
TikTok's "Nature's Cereal" Ice Cream Is A Bussin' Dessert Version Of The Viral Trend
By Rachel Chapman
The TikTok Recipe You Should Try, Based On Your Zodiac Sign
By Chelsea Jackson
Stay up to date