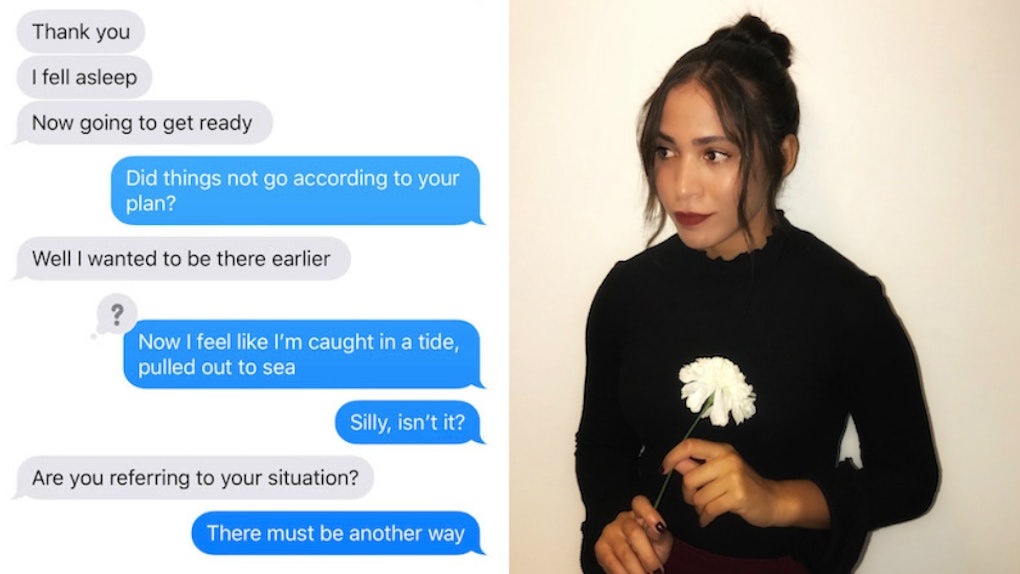 I Flirted Like Victoria From 'Corpse Bride' & This Is What Happened

“I always hoped to find someone I was deeply in love with, someone to spend the rest of my life with. Silly, isn’t it?” It isn’t, really, but I would never say this. Not even if my fiancé left me in the middle of the night to elope with a literal corpse. That’s probably why when I flirted like Victoria Everglot (from whom I stole that opening line) for a week, my partner thought I was having an emotional breakdown.

Tim Burton’s Corpse Bride has everything you could ever want in a Halloween movie — dimly lit walks through the neighborhood graveyard, land-rich aristocrats who’ve locked their only daughter away in a decrepit mansion, musically talented skeletons, and an oddly poetic love triangle. Wait, those last two things don’t add up at all. Nevertheless, they’re in there and I’ve got to admit, this is still a pretty good Halloween movie.

To be clear, there are two leading ladies in this movie — Victoria Everglot and Emily, the corpse bride. Both are deeply romantic women who believe in soulmates and true love, which I can’t say are two things I spend a lot of time thinking about. For this experiment, I mimicked Victoria’s terminology and general mannerisms because well, Emily is dead and it would be way more complicated pretending to be her. Throughout the week, I mostly used cryptic one-liners that Victoria actually uses in the movie and later, stole a few pages out of her stylebook.

If this movie somehow slipped through your October to-watch list, let me bring you up to speed. Victoria Everglot’s elitist parents have decided to marry her off to Victor Van Dort, the son of a nouveau riche fish merchant and his wife. The marriage seems unlikely because of the class difference between the two but it’s important to both sets of parents for different reasons. The Everglots have gone bankrupt and hope that Victoria’s marriage to Victor will “save them from the poorhouse,” while the Van Dorts wish to legitimize their wealth by having their son marry up. Neither family suspects that Victor will be swept away the night before his wedding by a charming corpse bride with a runaway eyeball and a maggot for a stream of consciousness. I mean, who could have seen that coming?

All throughout the movie, Victoria is meek and poised. She’s loyal to her parents and abides by their wishes, even when her heart says otherwise. “What if Victor and I don’t like each other?” she asks her handmaid as she’s getting ready for the rehearsal dinner. It’s clear that she’s a hopeless romantic. When she and Victor meet, her fears of an arranged marriage gone bad fade away. He is sweet and coy, much like she is. Her only act of rebellion comes once she’s learnt of Victor’s fate and tries to save him from the underworld and, by extension, save herself from her parents’ new chosen suitor.

Now, I’m not betrothed to anyone. I don’t live in an old mansion and I definitely don’t think the living can marry the dead (more on that later), but I like Halloween. And that’s really all it took for me to get into the spirit of this experiment. My partner… not so much.

Like I mentioned earlier, I’m not the most sentimental person, which is why I had to ease my partner into this experiment without raising too much suspicion. Before I dropped a V. Glot (can I call her that?) line, I introduced the topic of soulmates with a simple question. “Do you believe in soulmates?” I typed. My partner didn’t think too much of it and said he wasn’t really sure he had a firm opinion on my question. I followed up with my adaptation of Victoria’s words to make my question clearer while my partner Googled the meaning of the word, “soulmate.”

He asked if soulmates are just two people in love and I replied, “Perhaps, if they are meant to be?” Although not an exact line from the movie, this definitely felt like something Victoria would say in this situation.

I’d been at this soulmate thing for a while now so it was only a matter of time before my partner asked what was up. He wondered — correctly — if I was working on an article because he’s been a subject in my dating experiments before. I couldn’t let him ruin it all on Day 1, so I ignored his question and pressed on.

Victoria was totally worried that she and Victor wouldn’t like each other so, of course, I had to know: “What if you’re betrothed to someone and you don’t like each other?” My partner didn’t reply in a text because I tend to post screenshots on Twitter of what I consider to be funny conversations we have. He did have a question, though. He called to find out what “betrothed” meant and then, why two people who didn’t like each other would ever be engaged. Disclaimer: he was right to call me because if he’d texted asking this, I would have 100 percent posted it on Twitter.

Perhaps, I could keep this up if I keep talking like this. For a sad girl with very few lines, Victoria sure uses that word a lot. That evening, my partner and I were both off to the gym so I sent him a solemn text saying, “Perhaps, in disappointment, we are perfectly matched.” He just laughed it off and reminded me to stretch, which I didn’t and never do. Yell at me later.

When he checked in an hour later, I decided to kick things up a notch. I told him, “You’re as cold as death. What’s happened to you?” It’s what Victoria tells Victor when he comes to visit her from the underworld and I figured it wouldn’t be too strange since he should have been leaving the gym around that time. Gym, underworld… same thing. He didn’t get it and just replied with a question mark, which I guess I deserved.

Since I was determined not to break character, I transitioned immediately into another topic with lots of Victoria potential. I asked what he was listening to at the gym, then explained that music is way too passionate for a young lady so I opted for an audiobook. When Victor plays the piano for Victoria the first time they meet, she tells him that her mom never lets her near the piano for this very reason. It’s a sweet moment for them, unlike the one I was having with my partner. He jumped right over my bizarre confession and into his need for a new pair of headphones. I explained that once he got them, everything will go according to plan because that’s the central theme of the movie and the lyrics of the opening song.

Day 3 was another gym day and it did not go according to plan. My partner overslept after work, giving me the perfect opportunity to nag him about things not going according to plan. This question is one of Victoria’s sassier lines, which comes up when all hell literally breaks loose (I’m talking skeletons rioting) at her last-minute wedding to the evil Lord Barkis.

He didn’t even notice that this line was a repeat from the day before so I kept going. In true Tim Burton fashion, Victoria and the entire movie are very moody. She says things like, “Now I feel like I’m caught in a tide, pulled out to sea.” Totally nonchalant. She also doubts herself a lot (we have that in common), so I added her, “Silly, isn’t it?” from an earlier conversation with Victor.

By this time, I was fairly certain my partner thought I was going through an existential crisis, which I kind of am at the moment. It was a tough week to date me. Effortlessly, I leaned into Victoria’s melancholy, adding a desperate, “There must be another way,” for no reason at all. TBH, I don’t know how I’m not single yet.

On Day 4, I didn’t waste any time. Without waiting for my partner to say something relevant, I asked, “Can the living marry the dead?” Victoria asks Pastor Galswells this in the church when she begs him to save Victor’s soul. My partner didn’t question me; instead, he answered more earnestly than I expected. He had a good point about the dead not being able to have a say in the matter. Although, in the movie, corpse bride Emily is definitely more forceful than Victor. In fact, it’s Victor who has very little agency in the relationship.

He followed up his theory with a very simple, “I love you,” and I replied, “I feel the same.” Victoria and I might be different in our long-term romantic hopes but we are very similar when it comes to how reticent we are to speak boldly. My partner didn’t get my response and I couldn’t blame him. He asked if I was OK a few hours later because he figured something might be wrong. Again.

There’s nothing I love more than a grand finale, which is exactly what I set out to stage on Day 5. Unbeknownst to my partner, he was a huge help. He started the conversation with a link to an article about his family’s restaurant. I’d been waiting for the perfect moment to drop Victoria’s snappy comeback: “My parents don’t have any money. It’s my marriage to you that will save them from the poorhouse.” The time was now. Imagine my disappointment when he didn’t acknowledge it at all.

For my Victoria-inspired look, I tied my hair back in a high bun and pulled a few shorter pieces out at the front to frame my face. Victoria parts her bangs in the middle, which I never do, but my partner mentioned later that night how much he liked the ~new~ look. For my outfit, I went with a black turtleneck sweater (all of Victoria’s necklines are like this) and a maroon skirt. It’s hard to tell what’s going on color-wise on screen because the entire movie is so dark but this seemed appropriate. I added a dark lip to complete the look.

Short of a musical number performed by skeletons, this is as wild as things got for my partner and me during this experiment. I decided to ignore his question just like he had ignored some of my earlier texts. When he asked why I was dressed up, I replied by asking where he’d been. It’s how Victoria greets Victor when he tries to tell her about his new fate. I’m guessing my partner thought I was chastising him for his silence earlier, which is why he apologized. I used this to my advantage. “Who is she?” I fired back, like Victoria does when she learns about Emily. My partner — a huge fan of naps, if you couldn’t tell by now — replied, “The dream, I see her all the time,” and honestly, it was the funniest, most fitting response to my absurdity.

Who knows? Maybe he is having an affair with a corpse in the underworld. I mean, why stay up here with me when everyone’s dying to get down there?

As expected, things got pretty dark every now and then during this experiment. My partner definitely sensed that something was off, though he wasn’t sure if the problem was my emotional state or something he was doing wrong. The scariest thing about this experiment was wondering how much longer he would put up with my sullen mood. Lucky for me, everything went according to plan. Happy Halloween!