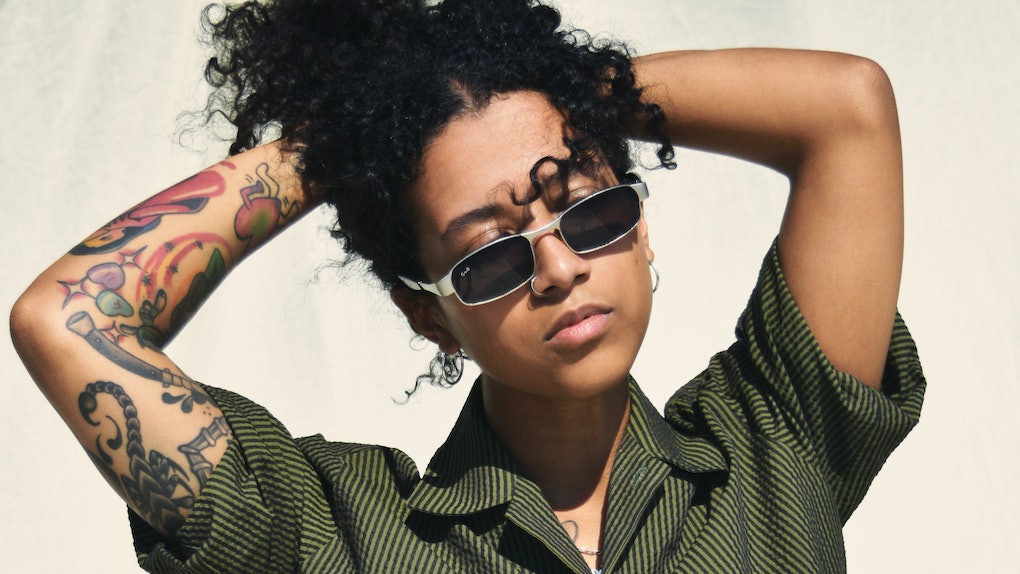 How To Talk To Your Partner About Being Bisexual, According To Experts

In a world where others may try to define you by who you're dating, understanding yourself not in relation to whom you're with can be, well, really freaking hard. No matter how long you've been out, it's not always easy to know how to talk to your partner about being bisexual. And whether you're seeing someone of your own gender, a different gender, or no gender at all (let alone same or differing sexualities), discussing your identity with your boo and establishing how they can help you feel validated and supported in it, is no small task.

According to a 2013 study by the Pew Research Center of nearly 1,200 LGBTQIA+ identifying people, only 28 percent of bisexual people reported being out to their friends and families, compared to 71 percent of lesbians and 77 percent of gay men. In a 2013 article titled, "Why Bisexuals Stay In The Closet," The Los Angeles Times reported that bi folks often don't come out for fear of facing hurtful stereotypes. With the pressures of biphobia (harmful stereotypes or judgments passed about bisexual people being more likely to cheat, less likely to seek monogamy, or just want to "experiment" in their sexuality) as well as bi erasure (denial of the existence of bisexuality), coming out as bi on an individual level can be a tumultuous process that's not necessarily easier within the loving bonds of a romantic relationship.

"Recognizing that not everyone is out (and doesn’t want to be out when first getting to know someone), it’s important to make sure you’re in a safe situation and that [coming out at bisexual] is a choice you are making," Hali Holtzman, a bisexual leader of an affinity space for Boston-based LGBTQIA+ identifying young adults and allies, tells Elite Daily. "There is nothing worse then being pressured to come out."

If you're a bi person on a date with a straight person, they may not know you're queer, which makes coming out as bisexual to a new boo particularly complex. If your date wrongly assumes that you're straight, coming out to them as bi can mean baseline coming out as queer, which can mean facing invalidating comments. "It is exhausting and frustrating to have to continuously defend my sexuality," Holtzman says.

When you're bi and your partner is a straight, cis person, it can be hard to feel validated in your identity, especially if people around you are focused on some biphobic misconceptions. "I have had the experience where friends, family, and peers who know how I identify question if I 'changed my mind' because I’m with a man. But I feel as though this invalidation typically comes from outsiders," Holtzman says. "When I’ve dated straight men, they haven’t had that toxic, 'Oh you’re straight now' mentality. This is because I won’t date men who believe that BS." Of course, coming out as bi to your straight partner can be incredibly difficult if your partner does believe that dating them means you're straight. Holtzman suggests having open dialogue with your partner and ultimately checking in with yourself about what a partner is bringing to your life if they are invalidating to your identity.

Yet, according to Holzman, coming out at bi to a new partner can mean continuously defending your sexuality, even if your new boo identifies as queer as well. "For most of my life I only felt hesitant when coming out to straight people," Holzman says. "I realize now that within the queer community there are micro-aggressions between identities. In a romantic relationship I thought it was going to be much easier to come out to a partner if they also identify as LGBTQIA+ because they ‘get’ it. This hasn’t always been the case for me."

According to a 2011 study by The Williams Institute, there's approximately nine million Americans within the LGBTQIA+ community, which is almost equivalent to the population of New Jersey. With representation of queer people in the media more widespread than ever,it's important to remember that even within the beautiful garden that is the queer community, coming out as bi to a queer partner can still be confusing and isolating. "I think the biggest issue is that it feels as though my partners only see me as what they want me to be (which doesn’t align with how I’ve identified myself)," Holzman says. "It’s super invalidating because it feels like after all this work I’ve done to feel comfortable with my own identity, they can’t be comfortable with it. It feels like being put in a box that isn’t the right size."

It can be frustrating to spend time and energy learning to express yourself in a relationship, only to have your partner negate how you're feeling. No matter how in love you are or how long you've been dating, how your partner sees you doesn't need to change how you see yourself. Your bi identity is valid and real no matter who you're sleeping with, dating, crushing on, or even married to.

The best time to talk to your partner about being bisexual is whenever you feel ready to. "Wait until you are comfortable — you don’t owe anyone anything," Holzman says. "Having a conversation about identity is super important before entering any relationship. For me, I’m at a point where I will not put myself through the emotional toll of dating people who invalidate me." Whether you're facing uncomfortable jokes or comments coming from your date or hurtful assumptions that you "may be likely to cheat" or aren't "really queer," there may be a lot of signs your partner isn't super receptive or supportive of your bi-ness. If for whatever reason your boo isn't validating your identity, it's OK to address that and advocate for your needs.

When it comes to coming out, you get to decide the who, what, when, and where. If you feel comfortable sharing with your partner, Holzman suggests having open conversations with them about your identity. Waiting until you're comfortable and ready can help you feel strong when you choose to talk to your partner about your bisexuality. And remembering that your identity is legitimate — regardless of how your partner identifies — is a hard but super important practice.

If you're feeling ready to share your bisexuality with your partner, remember: You are real and valid, and anything you're feeling is OK. Even if others try to put you in a box for their own comfort, you get to decide what words and identities feel right for you and what kind of support you need from the people you date. At the end of the day, being bisexual is a wonderful, beautiful, amazing part of what makes you you, and anyone who can't understand what it means to be bi, deserves a big bye-bye.