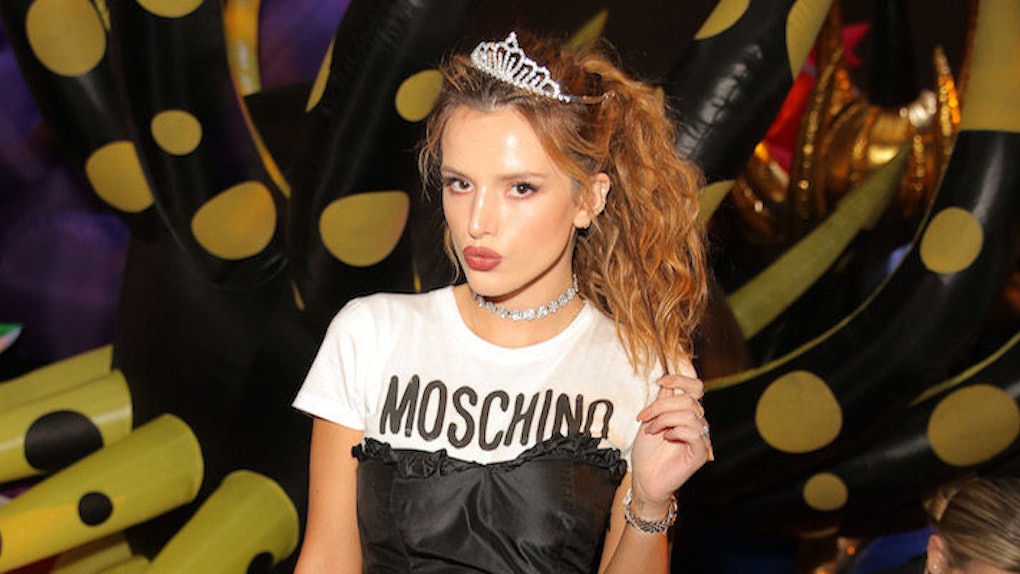 If you happen to read this article TODAY, September 23, then you, sweet kitten, clicked into this bad boy on 2016's official BI VISIBILITY Day.

And if you happen to read this after September 23, then keep on reading, baby. Your lesbian big sister has something to say. (Doesn't she always?)

I think every single day, from here on out, should be ~Bi Visibility Day~.

Did you know millennials are the most bisexual generation to ever grace the planet? And did you know that, according to a recent study, HALF of young people from ages 18-24 claim they're "not 100 percent heterosexual"?

Did you know that millennials are the most bisexual generation to ever grace the planet?

Millennials are embracing their sexuality like no previous generation ever has — wonderful, fabulous news that makes me want to dance in the city streets while chicly draped in a 1,000-thread-count rainbow flag. Can I get a YAS QUEEN? YAS, QUEEN, YAS.

Our country is slowly but surely becoming a more accepting, wonderful place for us queer kids. However, there is still a bizarre stigma and phobia surrounding bisexuality, specifically.

In fact, A recent study by the Human Rights Campaign suggests bi youth — ages 13 to 17 — might be facing even greater challenges than their gay or lesbian peers.

Not only do bisexual young teens deal with the same universal, LGBTQ+ issues of coming out — including bullying, harassment and family rejection — but they also have an additional set of their own unique challenges.

In the study, many bisexual teens admitted that when they finally mustered up the courage to come out to friends and family, they were told "bisexuality doesn't exist, that it is just a phase, and that they are indecisive."

Plus, the study authors found that bisexual young people experience biphobia within the LGBTQ+ community, too.

This wouldn't surprise me if we were talking about Generation X, or even older members of Generation Y, like myself. But we're talking Gen Z here. AKA, our future.

And that's why today, Bi Visibility Day, is so fucking important in our movement toward LGBTQ+ acceptance. As an out lesbian, I can tell you from personal experience that the most affirming, empowering thing in the world is to be seen — not just to be seen by the world at large, but to be seen by your people. Your community.

And the LGTBQ+ community still has a long way to go when it comes to "seeing" bisexuals.

I've had so many people challenge me when I talk about biphobia. People tell me it's not a real thing, and I've been accused of "creating problems that don't exist" more times than I care to count on my powder-blue nails.

"What are you talking about? Bisexuality is totally accepted now, Zara. Get with the times, you washed-up, 30-year-old hag."

Just because YOU haven't been personally affected by bigotry, or if you're still blind to it somehow, doesn't mean it doesn't actually exist. The proof is in the study: Biphobia certainly exists, and not just within older generations, either.

Studies and stats aside, I've been out and about on the queer scene for over a decade, and I'll safely say I've encountered more biphobia in my day than I could've ever dreamed of. Maybe it's because I'm a little more femme-presenting (whatever the hell that means), but when I first came out, I was met with a collective eye-roll from the lesbian community.

"You sure you're a lesbian and not 'bisexual'?" lesbians would endlessly hiss at me.

Yes, I'm a lesbian. Thank you very much for invalidating my sexuality based on my personal style, which is degrading in and of itself.

But what pissed me off the most wasn't actually that I was being confused with being bisexual. It was the proverbial air quotes around the word "bisexual" that I found so wildly offensive.

We do the same thing to bisexuals that we do to trust fund babies who splatter paint on the walls of their $10,000-per-month Williamsburg lofts and call themselves "artists," or girls from the Midwest who pack up their shit, move to L.A. and work as cocktail waitresses on the Sunset Strip, though they swear they're "actresses."

We address bisexuals with the same seriousness as we do people who are delusional about their careers. WINK WINK.

Beneath the "wink wink" is this weird subtext that says, "Oh, she's 'bi.' We all know it's a phase. She's really straight," or "Oh, she'll get over being an 'artist' when she blows through her trust fund."

The difference is that bisexuality isn't a career, a choice or a lifestyle, even.

Elite Daily's very own video-producing extraordinaire and out bisexual Sierra Jiminez (who recently graced the cover of GO Magazine, where she spoke publicly about her sexuality) says she's found that the lack of acceptance is the most harrowing part of  being an out bisexual.

"I think the hardest thing about being bisexual is that people don't accept you as a real member of the community," Jimenez says. "So when you're out, it's super important to stand your ground and say, 'I exist. You can't pretend like my feelings and my sexuality aren't valid.'"

"At the end of the day, we need to unify the LGBTQ+ community and continue our fight for equality… and we can't do that if we still exile people based on their sexuality."

Clearly, putting an end to biphobia is on all of us as a society. It's not solely up to bisexual people coming out. Rather, it's up to the rest of us to create a safe space for bisexual people to come out.

So, no matter where you land on the ever-increasing spectrum of sexuality, you need to validate, accept and, most of all, see bisexuals. How can you expect an entire generation of young people to embrace their sexuality when we're still shaming them for it?