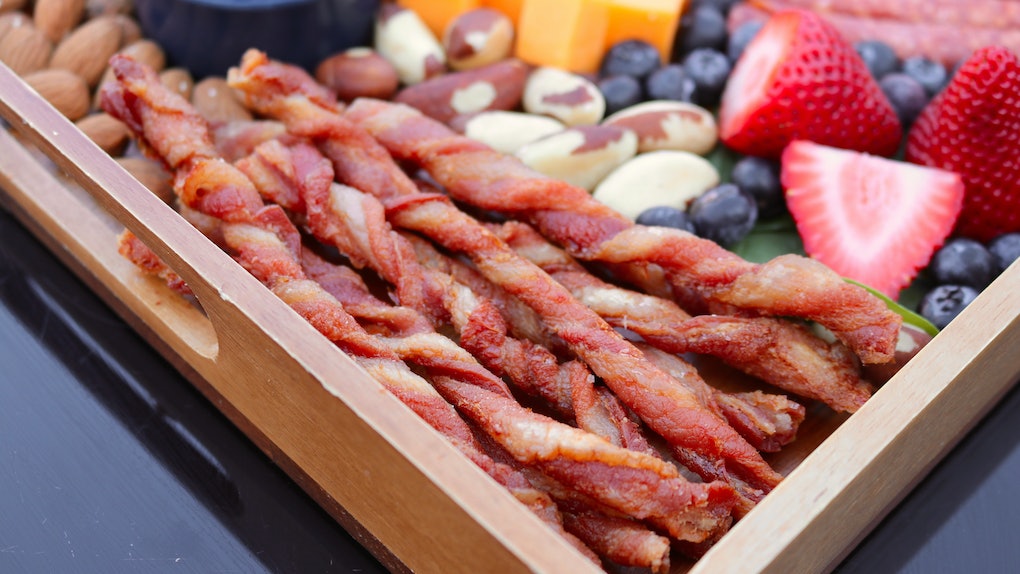 TikTok's latest food trend is all about putting a fun twist on a classic — literally. Twisted bacon is popping up all over foodie TikTok, and it's the hack you never knew you needed. By twisting your bacon before putting it in the oven, you get extra crispy and delicious bacon sticks that can be used in a number of dishes. If this is something you'll want to fry for yourself, you need to know how to cook TikTok's twisted bacon.

Scrolling through the #twistedbacon tag, you'll see video after video of TikTokers trying out the twisted bacon recipe. The hack has been attributed to TikToker @houseofketo, who posted a video of a "twisted bacon straw hack" on March 3, 2021. In the video, it shows the user how you can twist raw bacon strips and place them on a baking sheet. Cover them with whatever seasonings you like, and cook for about 30 to 40 minutes at 400 degrees. (It really depends on how crispy you like your bacon.) Once it's cooked to your liking, you can enjoy.

If you'd like to try bacon some twisted bacon from TikTok, check out these eight videos to get inspired with different seasonings and ways to use your twisted bacon in different dishes.

1. The OG Recipe Is A Great Place To Start

TikToker @houseofketo's OG recipe for twisted bacon is a great place to start on your bacon journey. The seasonings used in this TikTok are:

It should also be noted that you can fold your bacon twists in half to make more room on your pan for more bacon.

2. Make Tons Of Bacon At Once

By twisting your bacon, you can really fit a lot on one pan. It's perfect for cooking an entire pack of bacon for your summer backyard hang or making twisted bacon sticks to add to your Insta-worthy charcuterie board. TikToker Jackie Hartlaub (@lowcarbstateofmind) even made over two pounds of bacon at once with this method.

Some people like their bacon a little bit on the chewy side, while others love it extra crispy. If you're in the latter camp, make sure to twist your bacon extra tight. According to @houseofketo, with a tight twist, you'll get the perfectly crisped bacon twist of your dreams. In this video, Trader Joe's Everything But the Bagel Sesame Seasoning Blend is also used to give it some extra flavor.

Another way you can get extra crispy bacon is to cook it in the oven a little bit longer. While 40 minutes seems to be the average time, TikToker @ketoaccountable cooked their bacon for 50 minutes at 400 degrees. You can also flip your bacon in the middle, so that both sides are well-cooked.

Take your twisted bacon to the next level with this twisted bacon wrap recipe from TikToker @ywmfamily. While your bacon is in the oven, heat up some tortillas with shredded cheese on top. When the bacon is ready, roll it up in the tortilla and you have a tasty treat. There's also a way to make this a breakfast version by adding some eggs to your tortilla with your bacon sticks.

For a sweet and savory snack, make some candied bacon twists. This twist on the OG recipe comes from TikToker @ketocraigs, who added brown sugar on top. In the oven, the sugar will melt and coat the bacon to create candied bacon sticks.

Inspired by the bacon twists, you could make these bacon asparagus pastry twists. In this recipe from TikToker @the_health_bites, wrap your asparagus up with the bacon and some pastry dough. After cooking in the oven for about 18 minutes, you get these delicious snacks that are perfect for a backyard picnic with your bae-con.

More like this
8 Cloud Cake Recipes On TikTok That Give The OG Cloud Bread A Sweet Upgrade
By Rachel Chapman
TikTok's Viral Ranch Pickles Recipe Is A Big Dill, & So Are These Other Pickle Recipes
By Marisa Casciano
TikTok's Spicy Pickled Garlic Recipe Only Has 4 Ingredients, So You'll Be Done In No Thyme
By Rachel Chapman
Stay up to date