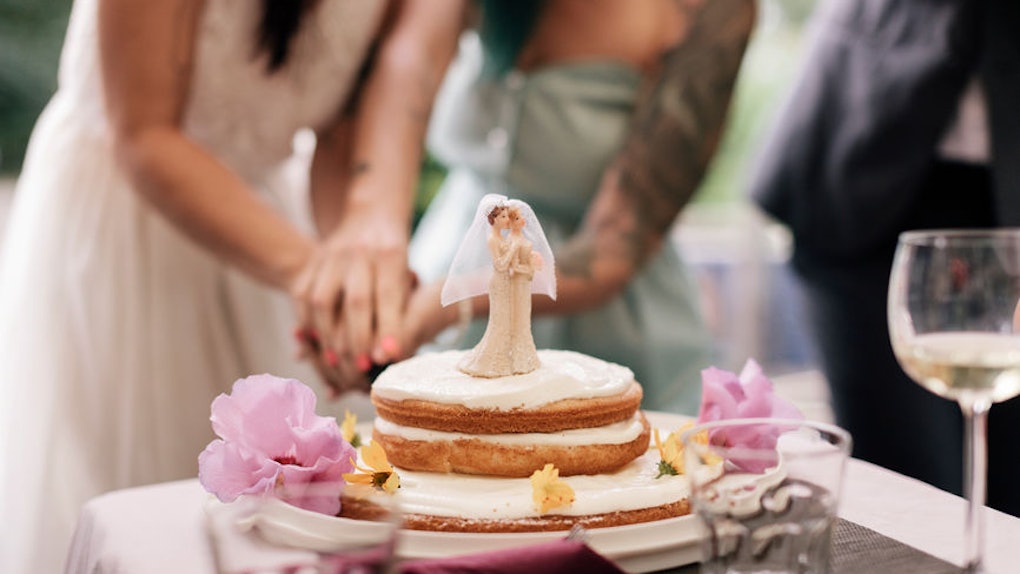 How Long Is Wedding Season? It's Growing Every Year — Here's Why

In case you haven’t noticed while scrolling through your Instagram feed, it’s officially #weddingszn. And is it any wonder why couples tend to tie the knot during the warmer months? The weather is ideal for an outdoor ceremony or reception, the photo opps are plentiful thanks to the sun-drenched scenic backdrops, and people tend to have more vacation time, to boot. Not to mention, love seems to be in the air during summer, so it simply makes sense to take advantage of those romantic vibes. But how long is wedding season exactly?

As it turns out, wedding season has been getting longer and longer in recent years. While the most popular time of year to get married varies somewhat from year to year, it has historically peaked in late summer, according to The Knot. And there is actually a slew of social, psychological, and historical reasons for this. So, it should come as no surprise that the Knot’s 2017 Real Weddings Study revealed that a staggering 78% of all weddings happen between May and October. Back in 2016, The Knot’s research revealed that June was the most popular month for weddings, and June 18 was the most popular date for couples to say “I do,” followed by May 21 and June 11.

Times have changed, however. Flash forward to 2018, and the Brides 2018 American Wedding Study showed that September and October were the most common months to tie the knot. While research by The Knot found that the most popular wedding date in 2018 was Aug. 18, it was followed closely by Oct. 20, Oct. 6, Sept. 22, Sept. 15, and Oct. 13.

As it turns out, a new Zola study confirmed that this trend has only been intensifying, too. According to a press release from the wedding registry website, the top month to get married in 2019 is September — and a whopping 40% of weddings are happening in the fall, with the majority of the rest going down at the very end of summer.

In looking at that data, it's evident that wedding season now essentially lasts for a whole five months — from early June to late October. That's almost half the year, folks.

But is it any shock that more and more couples are getting hitched during autumn? For one — the weather tends to be sheer perfection (as in, you don’t have to stress about pit stains on your designer gown, or your makeup melting off). Not only that, but nothing amps up the wedding photos quite like some colorful fall foliage (#nofilterneeded).

"There's really no 'best' time to get married, but it's no surprise fall is so popular because the temperature is mild, the photographs are Pinterest-perfect, and it avoids the summer travel season for guests," Jennifer Spector, Zola Director of Brand, tells Elite Daily.

Unfortunately for hopeful fall brides-to-be, as the demand for autumn weddings rises, so does the cost. Not only that, but as the off-peak season becomes shorter and shorter, there’s less of an opportunity to save money on the whole shebang (unless you're dreaming of a winter wedding).

The bottom line? If wedding season feels longer than ever, you’re not imagining things. In fact, by the time brides finish saying “I do” in October and November, there’s just a short off-season during the dead of winter before wedding season ramps up all over again in spring. But hey, look on the bright side — at least you and your boo will have more IG-worthy fall photo opps, right? And if you’re single, it’s worth noting that fall marks the start of cuffing season — so those weddings could provide the perfect chance to snag a winter snuggle partner.

More like this
Zac Clark & Tayshia Adams Are Wedding Planning & I’m So Pumped
By Lydia Wang
When Are Ariana Grande & Dalton Gomez Getting Married? Here's The Reported Tea
By Corinne Sullivan
19 Cute “Good Morning” Texts To Send Your Partner Every Day & Put A Smile On Their Face
By Christy Piña
Stay up to date