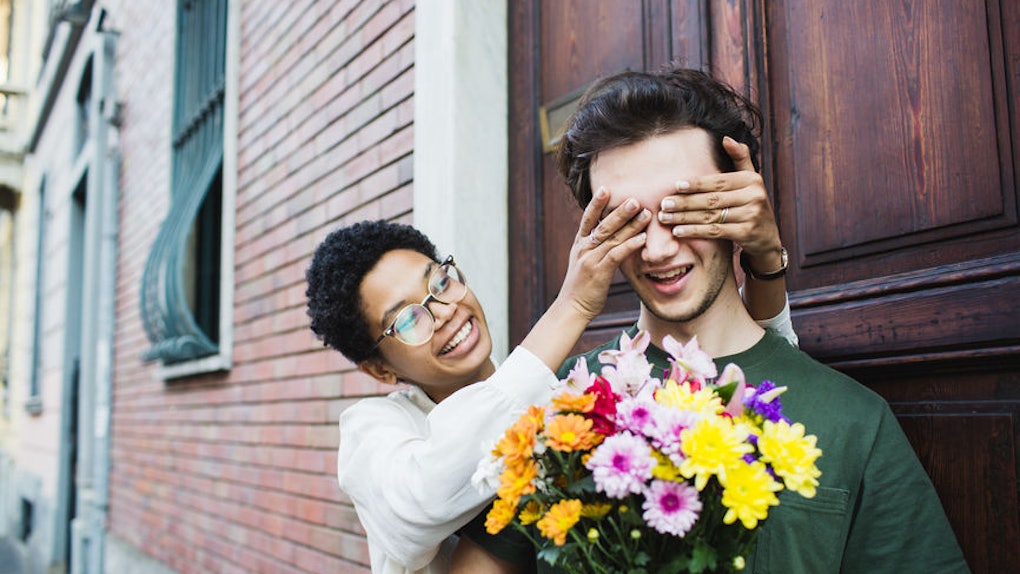 Here's Why You Love Chocolate & Flowers On Valentine's Day, According To Science

Be honest, friends: It might be cliché to receive a bouquet of roses or an expensive box of chocolates on Valentine’s Day, but you love it; I mean, you literally love it. Save for the people who aren’t into flowers, (or just don’t have a green thumb because, seriously, can’t the damn things just water themselves?), and those who dislike the taste of chocolate (um, why?), science says it’s natural to gush over colorful petals and decadent truffles. See, the reason why you love chocolate and flowers on Valentine’s Day has little to do with holiday hype, and everything to do with your hormones. So whether they’re a gift from your SO on Feb. 14, or you spontaneously decide to treat yourself to one or the other (or both) on a random Tuesday in July, chocolate and flowers will make you feel good either way.

During a study conducted by UK flower delivery service, Bloom & Wild, in collaboration with the School of Human Sciences at London Metropolitan University, researchers discovered that flowers and chocolate make you feel loved, literally. Per Bloom & Wild's official press release, researchers recruited 30 student volunteers for the experiment, and gifted them either a box of Bloom & Wild flowers, Cadbury chocolate, or a bottle of water. According to the findings published in the journal Neuroscience, in order to analyze the participants' hormonal shifts, the researchers collected saliva samples from each individual before they received their gifts, 10 minutes after receiving their gifts, and 40 minutes after receiving their gifts. In the end, the study's results showed that flowers and chocolate seem to naturally raise levels of oxytocin, also referred to as the "love hormone," in the body.

Now, personally, I’m more of a chocolate lover myself, but TBH, whenever my husband comes home with a decadent chocolate treat or surprises me with a bouquet of vibrantly colored flowers, I swoon. I could never put my finger on why chocolates and flowers specifically made me feel so loved and appreciated, but I guess science just took out that guesswork for me.

The results of Bloom & Wild’s experiment match up with a slew of studies out there claiming that both chocolate and flowers respectively induce positive emotions. For example, according to research published in the journal Evolutionary Psychology, a team of scientists from Rutgers University in New Brunswick discovered back in 2007 that flowers can naturally uplift your mood. The findings were based on a series of blind studies performed in 2005, in which participants were gifted either a bouquet of flowers, a decorative candle, or a fruit basket. Unlike those who’d received candles and fruit, recipients of floral bouquets responded with what’s called a “Duchenne smile,” aka a heartfelt, “true smile” that involves the mouth, cheeks, and eyes. What’s more, three days after receiving the gifts, the results showed that flower recipients seemed to feel happier than those who had received candles and fruit.

But what is it about flowers that can trigger this type of response? According to the study’s co-author Jeannette Haviland-Jones, a psychologist and former professor of psychology at Rutgers University, past theories have suggested that people like flowers because they're "a marker for fruit." However, Haviland-Jones explained during an interview with Rutgers Magazine that the flowers you display in your home for decoration don’t typically produce fruit, though they do reduce stress and encourage feelings of positivity.

"Somebody asked me, 'Are you saying that flowers are the pets of the plant world?' And that’s probably true," Haviland-Jones told Rutgers Magazine. "Flowers, like pets, help reduce stress. And, thanks to the new field of positive psychology, there’s more evidence that positive emotion is healing and enhances reproductive fitness."

While it’s true that flowers are good for your health in that they can boost your mood, decrease your stress levels, and some plants can even help you sleep, Wild & Bloom’s results showed that chocolate can cause your body to produce even more oxytocin than a bouquet of flowers. I can’t say I’m totally surprised, TBH, given that chocolate is definitely my preference, but according to Hotel Chocolat CEO and founder, Angus Thirlwell, it’s not just the taste of chocolate that you and I adore; there are all kinds of chemical reactions going on in that first bite that can cause such a positive reaction.

While many plant-based foods can make you feel happy, Thirlwell tells Elite Daily that chocolate in particular promotes the brain chemistry of being in love by stimulating all the right neurons. See, chocolate contains tyrosine and salsolinol, aka chemicals that trigger the production of the feel-good hormone dopamine, Thirlwell explains. Chocolate also contains a chemical called phenylethylamine, or the “love drug,” he adds, and that, paired with high levels of cocoa, can apparently act as an aphrodisiac, so not only will you feel loved eating chocolate, you might also feel a little romantic after a few bites, too. That Cupid’s a clever one, huh?

Having said that, even though chocolates and flowers are arguably the most popular Valentine’s Day gifts, need I remind you that both are available for purchase year-round? What I’m trying to say is that, it doesn’t matter if you’re coupled off on Feb. 14 because, as it turns out, being in love has little to do with how amazing these two simple objects can make you feel. Flowers and chocolates make you feel loved whether they’re a surprise from your SO, a best friend, or even a gift to and from yourself, so why not spread the love today and every day?