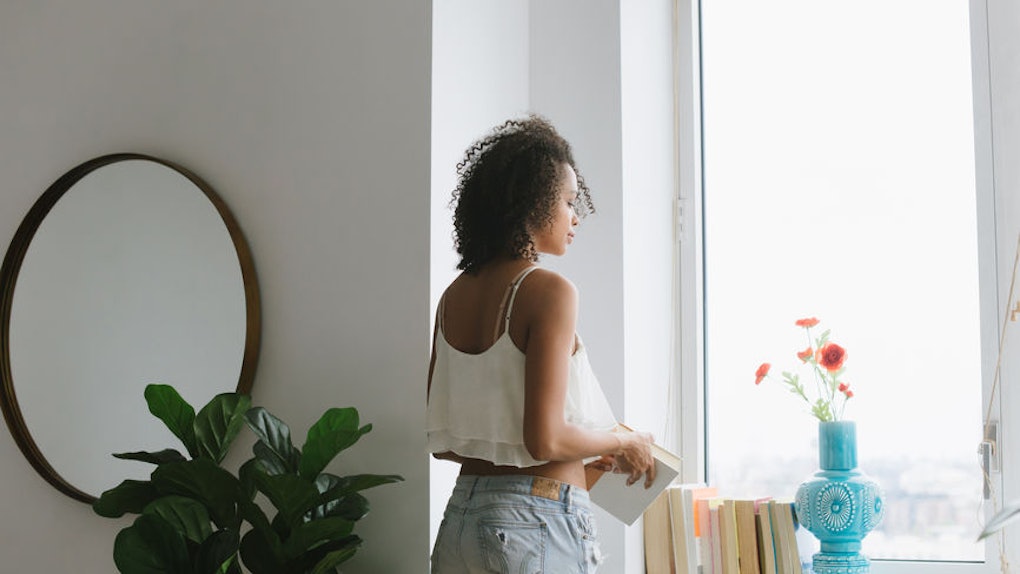 Are Flowers Good For Your Health? The Mood Boosting Benefits Are Pretty Great, Study Shows

For as long as I can remember, my mom has loved cultivating a large garden of herbs and flowers. "Gardening is my therapy," she always told me. And while, for a long time, I dismissed that as her excuse to visit Home Depot on a weekly basis, once I moved into a place of my own, the urge to nurture plants took hold of me, too. So are flowers really good for your health? Apparently, my mom had science on her side, so if you're wondering what in carnation will help soothe your frazzled nerves, look no further than a vase full of fresh flowers.

According to a new study from a research team at the University of North Florida, the benefits of bringing plants into your home are basically too good to pass up, even if you think you don't have that coveted "green thumb." Here's how the study was done: According to an AboutFlowers.com press release, researchers gathered 170 women between 18 and 65 years old and divided them into three groups. In one group, women were sent a home delivery of flowers; in the second group, the women received a candle of roughly the same value; and in the last group, the women didn't receive any gifts at all. The study took place over the course of 12 days, and each of the women, regardless of what gifts they did or didn't receive, completed an online survey to assess their stress levels every day of the research. For the women who received flowers or a candle, the delivery was sent to their home about halfway through the study, around day five or six, according to the press release.

At the end of the study, the researchers found that those who received flowers overwhelmingly reported that the blooms boosted their mood, while stress levels appeared to remain a bit higher for those who had received a candle or no home delivery at all. Basically, the simple act of bringing a bouquet into your home is enough to significantly boost your mood. "Our findings are important from a public health perspective because adding flowers to reduce stress does not require tremendous effort to generate a meaningful effect,” lead researcher Erin Largo-Wight, Ph.D., an associate professor at the University of North Florida’s Department of Public Health, said in a statement. “When life seems to be in a constant state of frenzy, flowers can provide us with a much-needed moment of calm.”

While this particular study comes from the Society of American Florists, an entire garden (see what I did there?) of research seems to support the nurturing health benefits of flowers, so get ready to fill your apartment with fresh green blossoms. The thing is, unlike more time-consuming ways to relieve stress, like going on long runs or writing in a journal, picking up a fresh bouquet of flowers is something quick and easy you can do for yourself when you're having a bad day.

And really, the sheer act of spending time around these plants may be enough to reap the benefits: In a 2014 study published in the Journal of Physiological Anthropology, researchers found that office workers who were exposed to unscented roses for only four minutes showed a decreased heart rate and reported significantly higher levels of relaxation than those who weren't exposed to any flowers at all. Simply being around a vase of the fragrant blooms while you're enjoying a cup of tea, catching up on your favorite show, or even doing the dishes can have seriously positive effects on your state of mind.

Now, I know it can be tempting to save money by filling your apartment with artificial flowers, but unfortunately, it seems like only the real thing will do the trick in terms of boosting your mood. A 2015 study published in the International Journal of Environmental Research and Public Health compared the effects of artificial and real pansies in a group of 40 high school students in Japan, and the researchers found that being exposed to the real flowers was the only way to produce a significantly relaxing effect in the participants.

Look, I'm no scientist, but it definitely seems like there's something about sharing your space with another living thing that's just plain great for your well-being. So the next time you walk by the flower display while you're shopping for groceries, treat yourself to a sunny bouquet. After all, it's for your health, right?