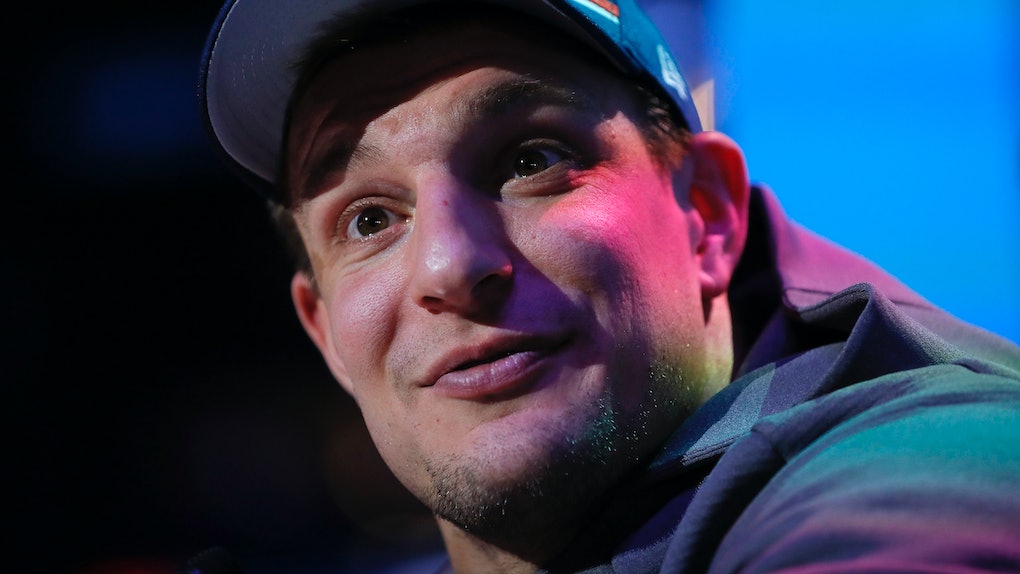 Here's What Rob Gronkowski’s Zodiac Sign Says About Him As A Partner, According To An Astrologer

If Patriots's quarterback Tom Brady is the GOAT, perhaps Rob Gronkowski is the bull. Born on May 14., the Pats tight end is literally a Taurus. With a strong, steady and strategic nature, Taurus the bull is the second sign of the zodiac. There's no question that the Patriots player is rough and tumble on the field, but what does Rob Gronkowski’s zodiac sign say about him as a romantic partner? I thought you'd never ask.

To fully unpack the celestial identity of Rob "Gronk" Gronkowski, I called in our starting lineup of zodiac experts, namely, astrologer Cindy Mckean. "Rob Gronkowski is a sun sign Taurus — this makes him fixed, stoic, strong, and determined," Mckean tells Elite Daily. "They search for partners that are practical, efficient, honest, and straightforward."

Of course, we'd be remiss to ignore Gronk's beautiful boo, cheerleader turned model, Camille Kostek, who graces this planet as both a glowing angel and a sensitive Pisces. The flawless water sign, Kostek confirmed the pair's romantic status in a 2018 interview with Sports Illustrated. Yet Gronk started making an affectionate appearance on the model's popping Instagram as early as 2015. And with a dependable nature and no BS attitude, Gronk the Taurus probably makes a pretty awesome partner.

When it comes to keeping it real, Tauruses take the cake. Looking for someone to return their honesty and an inclination to be straight-forward, a Taurus is real and expects realness in return. "Tauruses prioritize loyalty in a relationship, so they are ride hard or die partners," Mckean says. "They're not into phony-bologna. Lip service, to them, goes as far as the lips. They don't judge or leave at the first sign of rough seas, they stick through it. There's only one catch — they expect that same blind loyalty in return." From saying what they're feeling to being loyal until the end, Tauruses prioritize genuineness and honestly in their love lives.

Don't be fooled by his robust figure, the Pats player is ultimately ruled by Venus, the planet of love and romance. With Taurus being a grounded earth sign, Gronk's probably a partner that wants to hold you tight, while still holding it down. "Cuddling is important to a Taurus, because as red-blooded creatures, they are very passionate in bed, fully immersing themselves and connecting with their partner through tactile senses and on a spiritual level," Mckean says. "The Earth-Venus combination makes them very affectionate, cuddly, tactile, sensual, and loving. Snuggle time with a Taurus is everything you'd hope for."

He Keeps The Conflict On The Field

Gronk may be rough and tumble on the field, but in his dating life, he's probably not into fighting. "Taureans do not like conflict, so their reaction to their partners that try to pick a fight is to simply ignore them," Mckean says. "They just don't like the hassle and find fights a waste of energy." Although he's likely to shut down a big fight, don't be fooled into thinking Gronk's a softie all the time. When brought to his limits, he's likely to push back "Just like a bull in an arena, goad a bull too far and you'll quickly find out how sharp and strong their horns are," Mckean says. "The proverbial bull in the china shop manifests into real life."

He Knows How To Set The ~Mood~

If there's one thing Taurus does well, it's treat themselves. And when a Taurus is in love, their boo gets the same benefits. "They'll surprise their partners with lavish gifts, they'll take them out to high-end restaurants or cook them a gourmet meal," Mckean says. "They know how to set a mood where they are with the right amount of lighting, scents, temperature, aesthetics, and general comforts tailored to their partner." Of course, all the wins this past season probably helps to keep the mood hot.

From gifts to cuddles to shutting down fights, it seems Rob Gronkowski knows what's up. Strong and steady and super into snuggling, this tight end probably makes for a pretty tight partner.

More like this
Sebastian Stan's Zodiac Sign Makes Him A Faithful & Loving Partner
By Rachel Shatto
Here's Why Someone Cheats On Their Partner, Based On Their Zodiac Sign
By Danielle Sinay
Emily VanCamp & Josh Bowman's Astrological Compatibility Is Dreamy
By Corinne Sullivan
Stay up to date