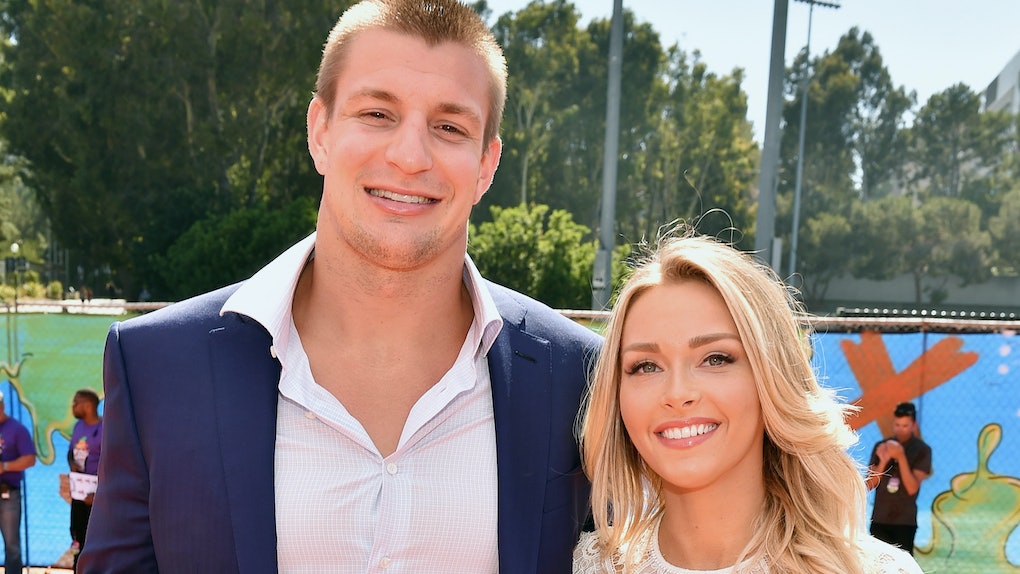 You know it's Super Bowl season when sports fans and non-fans alike get curious about the players they'll see come game time. Some folks look at their stats and relevant sports-related data, but personally, I'm far more interested in the real questions, like who they are, where they're from, and who they're dating! Take, for instance, Rob Gronkowski, aka “Gronk,” tight-end for the New England Patriots and his Pats cheerleader-turned-model Camille Kostek. When exactly they started dating is unclear. But one thing that is pretty clear? Rob Gronkowski and Camille Kostek’s astrological compatibility is fire.

In February 2015, TMZ first leaked that Gronk and Kostek were an item, and Kostek confirmed on a radio show that April that she and Gronk were, indeed, a couple. Fast forward to February 2017, when TMZ published a story saying the couple had actually broken up. It wasn't until 2018 that we saw the first traces of Kostek on Gronk's Instagram, and she started posting about him regularly.

They may have had a jittery start, but if their zodiac signs are any indication, this is one epic romance. Gronkowski was born May 14, 1989 under the astrological sign of Taurus. Kostek's birthday is February 19, 1992, which makes her sign Pisces. Right away, it becomes clear why these two are so drawn to each other. These are both deeply emotional signs with traditional ideas about romance. They are both nesters who want to be madly in love and settle down, so together they have a real chance of making that come true. Here's what else we can divine about how these two would fare in a relationship, based on the compatibility of their zodiac signs.

Taurus and Pisces share the same values in relationships.

Taurus and Pisces are two signs that share a lot of common values, but are just different enough to balance one another out. The result is a pair of signs that are highly compatible as lovers and companions. Both signs lead with open hearts and seek security and comfort in a relationship. Dreamy, idealistic Pisces keeps things fresh and interesting for Taurus, who can occasionally slip into a rut, where grounded Taurus offers true security for Pieces, who wears their heart on their sleeve and is all-too-often hurt by other, less ethical signs than Taurus. The bottom line is that these two signs are on the same page when it comes to matters of the heart, commitment, and their desire for a true long-term connection.

Taurus and Pisces have an instinctive ability to communicate.

Healthy communication is rarely a problem with these two signs, because they just have an innate ability to “get” one another and to just be in harmony. Pisces is ruled by Neptune, the planet associated with intuition, so they have natural gift for empathy and understanding what their partner is feeling and anticipating what they need. However, rarely are they able to find a partner that reciprocates. That said, in a Venus-ruled earth sign like Taurus, Pisces has finally met their match. Taurus is very connected to their emotions, and with that comes empathy. Plus, their warm-hearted and generous nature allows them to really be supportive and open-minded with Pisces' romantic heart. Theirs can be a powerful love match that feels like it’s happening on a spiritual level.

Where Taurus and Pisces get into trouble.

No two signs are perfectly compatible, so of course these two have areas of concern where, if they want to go the distance, they will have to be careful and conscientious. While ultimately these two signs want the same things — love, romance, and security — they have very different approaches and sometimes those can clash. Pieces is a true dreamer; they operate on a much more spiritual and conceptual level. However, as an earth sign, Taurus is grounded and more focused on realism and materialism. The result is that Taurus can find Pieces flighty and unrealistic, and Pisces in turn can find Taurus too shallow. Adding to that, these are both highly sensitive signs that can easily get their feelings hurt and resentment can grow, ultimately killing the chance of a forever romance. So, to get over these issues, they will both need to be gentle with their words and really lean into their empathic gifts.