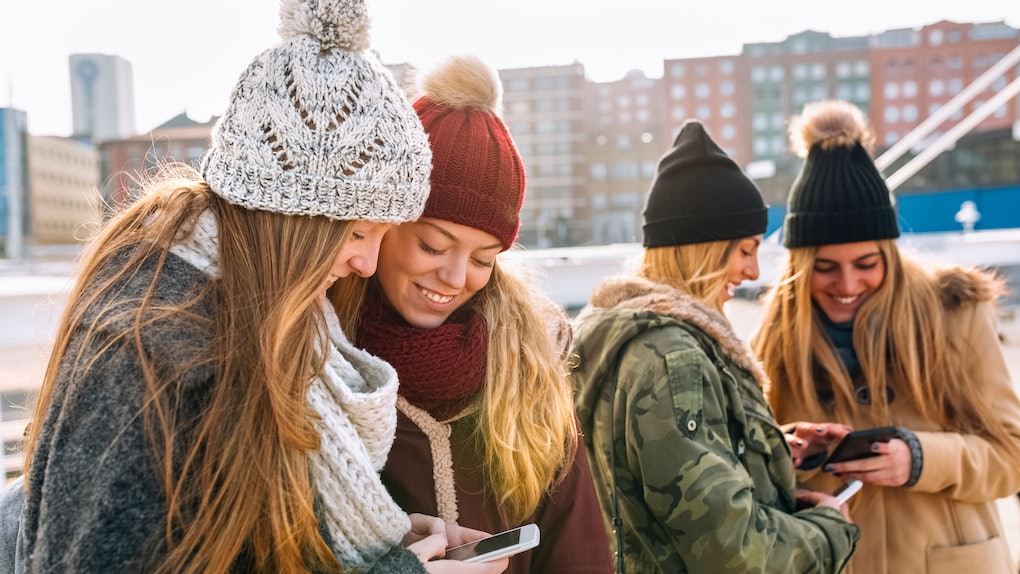 Here's How To Tell if Someone's Single On Instagram

Back in the olden days (i.e. like five years ago), people used to explicitly state their relationship status on Facebook. Nowadays, finding out who's single and who's taken usually involves some sleuthing. Venmo can be pretty telling, and Snapchat reveals a lot, but if you really want to figure out whether someone's still on the market, Instagram is the place to go. Although not everyone is going to 'Gram their partner on the daily, there are still ways you can tell if someone single on Instagram. Whether you've been following someone for years or just started following them, certain clues can help determine who's coupled up and who's available to hook up. Luckily for you, I know them all.

Maybe you're trying to decide whether that cutie who lived down the hall from you sophomore year is still single. Maybe you want to know whether the person you met at the bar last week is as unattached as they seemed. Even if their page isn't filled with couples selfies and captions proclaiming their love, a few key details can tell you whether someone's taken or up for the taking. Here are some clues to help you determine who's single and ready to mingle.

They Don't Have Any Couple Photos

OK, this is pretty obvious. If your crush has several photos that feature them smooching, hugging, or doing the classic hand-on-chest couple pose with the same person, chances are they're spoken for. The pics don't even have to be overtly couple-y if they always include the same person — that's usually enough of a sign. However, be sure to look at the handle of the person tagged, because if they share the same last name as your crush, you could be looking at a sibling or cousin. (Don't be embarrassed if you make this mistake — it happens to the best of us.)

Their Profile Pic Is A Solo Shot

People in a relationship don't always choose a couple photo for their Instagram profile pic. However, that pic is the first impression they give to anyone perusing their profile, so if the picture does include someone else, that person is probably pretty significant. This could be another case of a really close sibling. Or maybe they just picked the photo because they looked really good and thought it would be mean to crop out their friend. But in most cases, a profile pic featuring two people means you may want to proceed with caution.

Anyone Featured In Their Photos Often Is Just A Friend

Whether it's shots of just the two of them or group shots (or both), certain people are probably going to make more appearances on your crush's profile than others. If one person is showing up especially often, you might have reason to be wary, even if their relationship looks platonic judging by the pictures. I've found the best way to determine this is by checking out that person-in-question's profile. If that "friend" is clearly in a relationship with someone else, the case is closed. But if that "friend" posts just as many photos of your crush, you may want to take a careful look at the captions to see if they insinuate anything romantic.

A person doesn't always have to appear in your crush's photos for them to be present. Maybe your crush always gives photo cred to the same person with a tag or a shoutout in the captions. Maybe they often reference the same person in their captions, saying things like, "Thanks for teaching me how to properly smize, @PotentialPartner." If your crush goes on vacation for a week and posts a ton of solo shots all credited to the same person, that person is either an A+ friend or an SO.

Instagram captions are often just as telling as pictures, if not more so. There are plenty of ways to hint you're single through your captions without actually saying, "FYI, I'm available to date!" Does your crush use pickup lines as captions? Do they jokingly call their BFF their "date"? Do they frequently use the hashtag #ForeverAlone? Then your crush is likely riding solo at the moment.

Being in a relationship doesn't mean you have to stop posting hot bikini pics and steamy workout selfies. However, if a person is adding a ton of thirst traps to the 'Gram, they're likely trying to catch the eye of someone other than their partner. Again, the caption is key here. If the caption is something along the lines of, "Thanks for indulging my photoshoots, @PotentialPartner," they're probs taken. If the caption is, "Do you like what you see?," you may have an opening to slide into their DMs.

Their Tagged Photos Aren't All From The Same Person

One of the most underrated features of Instagram: the tagged photos tab. Even if your crush isn't the type to post couples pics (or post much of anything), their SO might be. If their tagged pics are all coming from the same person (and often feature only the two of them), you might want to investigate this mystery tagger. Relatedly, if your crush often reposts Instagram Stories they were tagged in by the same person, you should be questioning whether they've got an overzealous friend or an SO.

They Don't Go On Frequent Dinner Or Drink Dates

If your crush posts a pic or an Instagram Story of a dinner table where there are two meals and two drinks, they could be having a one-on-one dinner with a friend. But if this happens often and with the same person tagged, you're probably looking at a more-than-friends date. When you see a pic of two drinks, always check to see whether one of those beverages is tagged. It could be a couple pic in disguise.

They Don't Frequently Tag The Same Person In Comments

The sneakiest way of telling whether or not someone's taken on Instagram: the comments section of memes. If you follow a bunch of meme accounts on Instagram, then you probably know that when people you follow comment, their comment usually appears first. If your crush is tagging the same person in cute puppy videos and GIFs from The Office, the implication is that these two share a lot of inside jokes. Could that person be a friend? Of course. But if they tag that person in a puppy video and say, "@PotentialPartner plz buy this puppy for my birthday," there's probably something more going on.

Not everyone is forthcoming about their relationship status on social media (while others are a little too forthcoming). But even if it's not obvious, most anyone who's romantically involved and on social media will indicate their status, either purposefully or inadvertently. Keep your eyes peeled, friends. Someone may appear single, but the truth will only be revealed if you know where to look.

More like this
23 Lines To Use When Sliding Into DMs, Because It’s An Art
By Caroline Colvin
20 Tweets About Raya That Show Just How Exclusive It Really Is
By Corinne Sullivan
25 Instagram Captions For Your 2-Month Anniversary That Aren't Too Extra
By Corinne Sullivan
Stay up to date