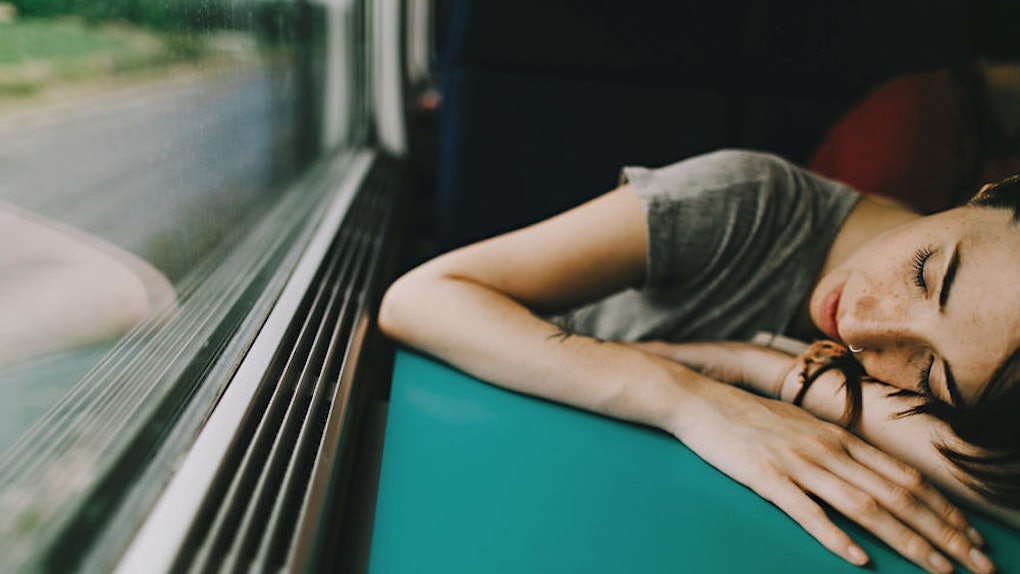 One night in college, I made the fatal mistake that just about everyone warns you not to make: I pulled an all-nighter right before a huge exam. Armed with several bottles of 5-hour Energy, I forged through the night in an attempt to study my butt off. The next morning, as you can imagine, I could barely keep my eyes open, much less think properly. Every now and then, you're bound to have a sleepless night like this. It's always going to be a struggle, but the key is knowing how to get things done when you're exhausted AF the day after your all-nighter.

The thing is, you can drink all the coffee or energy drinks you want the day after a sleepless night, but your focus is still probably going to be pretty shot. According to a new study, published in the Journal of Experimental Psychology: General, the effects of sleep deprivation are, unfortunately, pretty hard to shake. For the study, researchers from Michigan State University (MSU) brought 234 people to a lab at 10 p.m. and had them perform a series of tasks in order, occasionally interrupting them to see whether they could get back on track. After two hours of this, half of the participants were told to go home and go to sleep, while the other half were asked to continue carrying out the series of tasks throughout the night. In the morning, the participants who'd gone home returned to the lab, and both groups continued to work.

Ultimately, the study found that the difference in performance between the two groups was notable. According to the research, 15 percent of the participants who pulled all-nighters failed the morning tasks, compared to just 1 percent of the well-rested participants.

As this study shows, the effects of sleep deprivation are no joke, and according to ScienceDaily, they can have drastic implications for people who have high-risk jobs, like surgeons. Kimberly Fenn, an author of the study, associate professor of psychology, and director of the MSU Sleep and Learning Lab, said in a statement,

Every day, approximately 11 sponges are left inside of patients who have undergone surgery. That's 4,000 potentially dire missteps each year and an example of a procedural task gone terribly wrong that can result from sleep deprivation.

Of course, most people aren't completing everyday tasks with such high stakes, but no matter what you do during the day, it's important that you are able to get things done, even if you spent the last night tossing and turning.

If you stayed up all night watching every available episode of Parks and Recreation for the millionth time (#relatable), you still need to be able to get through your work or school day the best you can. With a few helpful strategies, your sleep-fog brain won't hold you back too much.

If you're feeling especially drowsy, start by taking a quick power nap. A review published in the nursing journal Biological Research for Nursing examined 13 different studies to determine the effects of napping on night-shift workers with sleep-related performance issues. The results overwhelmingly pointed to the benefits of taking a quick, midday snooze if you're feeling significantly exhausted. But, as nap expert Christopher Lindholst told Elite Daily in a previous interview, keeping your nap under a half hour is really important if you want to feel both refreshed and able to get back to your regular sleep schedule.

Another way to boost your productivity after a sleepless night? Try stepping outside for some good old-fashioned, nature-inspired energy. "Connecting with nature and being in fresh air can make you feel more awake," Leigh Winters, a neuroscientist and wellness expert, told NBC News back in February. "Also, getting some natural sunlight helps maintain circadian rhythms, which will help get your sleep schedule back on track."

If all else fails, reach for the ever-faithful caffeine hit. "A morning or afternoon cup of coffee will give you a caffeine boost that will energize you," Dr. Mike Roussell, Ph.D., co-founder of Neuro Coffee tells Elite Daily. Even better, he says, drink a coffee that's designed specifically for brain health. "If you drink a coffee fruit coffee, like Neuro Coffee," he explains, "then you will get additional support for your brain and neurons."