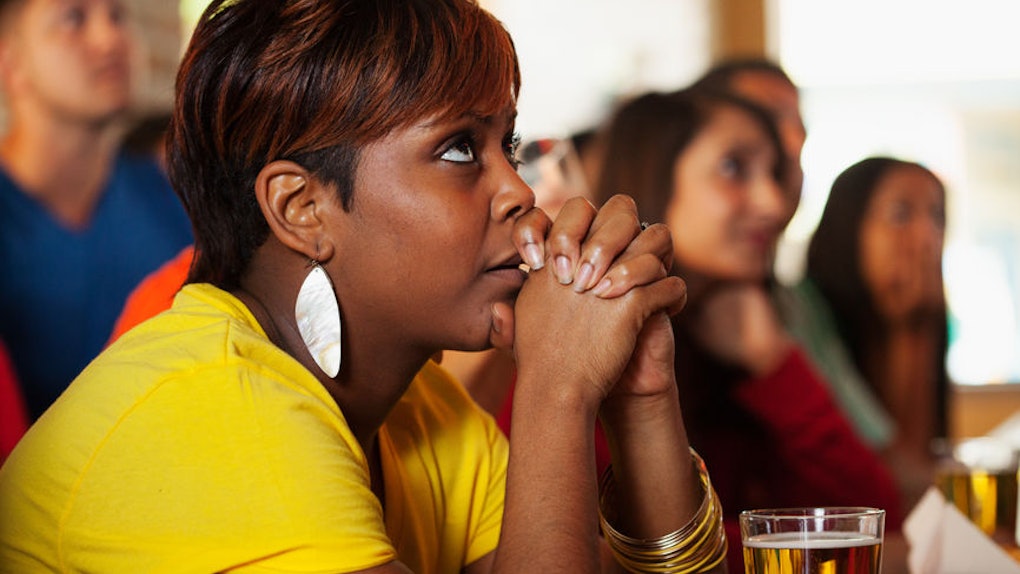 It's that time of year again, sports fans. The Super Bowl is coming this Sunday, Feb. 3, and you know what that means: screaming at the TV with your friends while wearing jerseys that don't fit well, drinking lots of cheap beer, and eating an unconscionable amount of 17-layer taco dip. It's not necessarily the "healthiest" way to prepare for the week ahead, but it only happens once a year, right? That being said, it might be worth figuring out how to avoid getting sick after the Super Bowl so you don't have to stay in bed for a few days after the big night.

Joyce Maroney, executive director at The Workforce Institute at Kronos Incorporated, said in a statement for the survey's press release,

We've been researching the big game's effect on the workforce for more than a decade, and while numbers may fluctuate each year, one clear fact remains: #SuperSickMonday is often the biggest day in America for calling out of work.

But hey, the world doesn't stop just because you caught a cold after Uncle Phil sneezed on the peanuts, or you had one too many beers when your team won. So, if you want to wake up ready to tackle the week, take a hint from some of the below experts, who can help you keep your well-being on track while you have a blast watching the game.

Use some hand sanitizer

Squeeze out some of that sanitizer throughout the night like you're at a hospital, my friends. Along with using your own little plate for snacks, it's a great way to guard against the germs involved in sharable foods like pretzels, wings, dips, and nachos.

And hey, who has time to wash their hands when there are so many commercials to enjoy on top of the big game?

Include vitamin C-rich foods in your snack spread

Maggie Michalczyk, a registered dietitian/nutritionist based in Chicago, says that vitamin C-rich foods are a great way to go when it comes to guarding your immune system against contagions. "Vitamin C is an antioxidant that helps to protect cells from damage caused by free radicals and helps the immune system work properly," Michalczyk explains.

"With the big game in the midst of cold and flu season, it's important to focus on vitamin C," she tells Elite Daily. "Blueberries are a good source of vitamin C and something easy to add to your game-day spread." Cutting up some oranges is a great idea, too.

Stock up on foods with magnesium beforehand

While magnesium is good for you all-around, Carolyn Dean, M.D., N.D., a sleep, nutrition, and diet expert and author of the book The Magnesium Miracle, says that fueling your body with this mineral can help to guard against a seriously nasty hangover.

Magnesium supports the enzyme that breaks down alcohol and eliminates it from the body, Dean explains. It also supports the proper liver function that alcohol disrupts, since booze indeed depletes a broad range of vitamins, amino acids, fatty acids, enzymes, proteins, and minerals from your body. "Magnesium is also an anti-stress mineral that most people with a hangover are deficient in," Dean tells Elite Daily. So, stock up, whether it's in supplement form, or through foods like spinach and sun-dried tomatoes.

"Consider adding kimchi or sauerkraut to your sweet potato skins or on top of mini sliders on game day for a dose of probiotics that will help to keep you healthy," Michalczyk suggests. "Probiotics are good bacteria that help enhance immune function, helping to lead to a decreased risk for the common cold."

Additionally, swapping sour cream for probiotic-rich yogurt can be an easy way to up your consumption of healthy bacteria and strengthen your immune system.

Ease up on the booze later in the night

Yes, the whole hangover thing is an obvious reason why people feel like crap after the Super Bowl, but easing up on the beer toward the end of the night can help you avoid a restless, unsatisfying night of sleep.

"Lack of sleep lowers our immune systems, and if you're still drinking deep into the fourth quarter, chances are, the drinks can interfere with your sleep," says Michalczyk, adding that the booze can often keep you up longer than you'd like, or it can actually wake you up in the middle of the night. "Not sleeping well and heading into a busy Monday morning can leave you immunocompromised, feeling rundown, and more susceptible getting sick," she explains.

So, try to stick to one to two drinks at the beginning of the game, and then consider switching to water or a mocktail at halftime.

More like this
Away's Travel Accessories Collection Brings Comfort To You In Any Destination
By Marisa Casciano
The TikTok Recipe You Should Try, Based On Your Zodiac Sign
By Chelsea Jackson
7 TikTok Recipes Using Ramen To Make Lasagna, Pizza, Smoothies, & More Treats
By Kelly Pau
Stay up to date