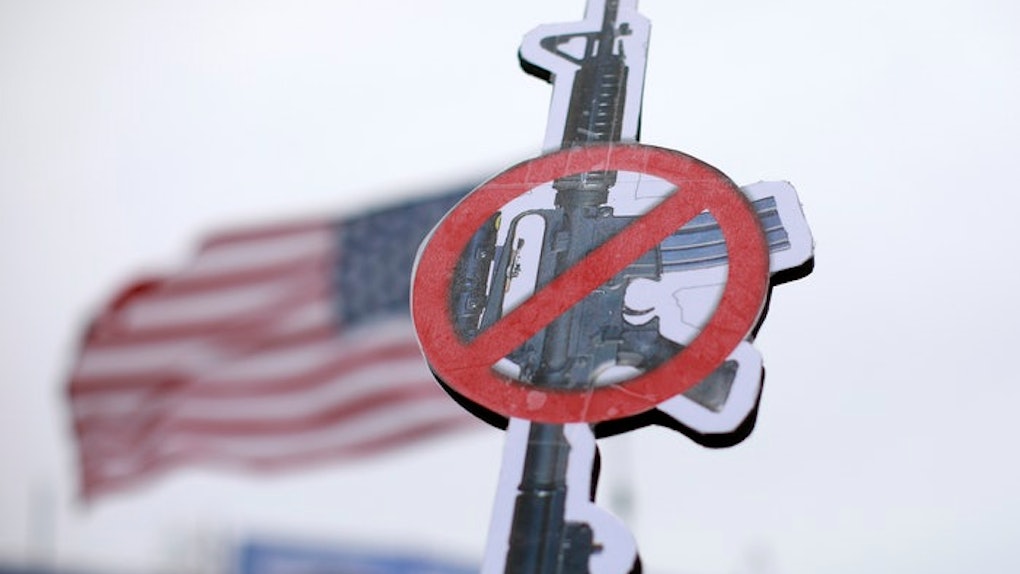 Have Gun Laws Changed Since The Parkland Shooting? There's Still Work To Be Done

It's been one year since the tragic Feb. 14, 2018 shooting at Marjory Stoneman Douglas High School in Parkland, Florida, one of the top 10 deadliest mass shootings in U.S. history. Since then, the conversation surrounding gun violence and stricter gun laws has come to the forefront among activists and concerned citizens alike. However, this is the real question on everyone's minds: Have gun laws actually changed since Parkland? Well, there's been some change — but there's still a ways to go.

On Feb. 14, 2018, an armed shooter opened fire at Marjory Stoneman Douglas High School in Parkland, Florida, killing 17 people. The Parkland incident, while not deadliest school shooting, changed the public discourse in a new way, in large part thanks to the outspokenness and eloquence of the school's students, many of whom banded together in the days after the shooting to call for gun policy reform and better gun control. The students organized the famous March For Our Lives rallies, which were held across the United States in March 2018. The marches demanded stronger background checks, restricting access to certain gun devices, and addressing gun violence at a federal level. But the activism didn't stop after the march. In the year since, the United States has seen some victories — and some more losses — in the fight for gun control reform.

There have certainly been some changes in the past year. According to a December 2018 report from gun safety advocacy group Everytown For Gun Safety, 20 states passed gun violence prevention bills over the last year. In Florida, where the shooting took place, massive public outcry about the shooting instigated reforms, and on March 7, 2018, Gov. Rick Scott signed a gun control bill that raised the minimum age required to buy a rifle from 18 to 21, allowed police to seize guns from people who may be threatening themselves or others, and set aside an estimated $400 million to increase school safety and mental health services. In addition, the bill introduced a three-day waiting period to buy handguns and other firearms. Nationally, waiting periods are not federal law and most people are allowed to receive their firearm immediately after the background check is complete — which typically only takes a few minutes. At the municipal level, 20 Florida cities incorporated six "major actions" on gun control, like increasing background checks and banning assault-style weapons.

Around the country, there has also been reform. States like Louisiana, Ohio, Kansas, Utah, Washington, Oregon, and New York have passed laws that ban individuals convicted of domestic violence from owning and purchasing a firearm. Other states have expanded background checks or have made it a felony for a person to make threats against a school and also own a gun. Even certain companies and businesses have have taken measures to distance themselves from gun lobbyists and change policies regarding gun control.

In addition to these states' legislatures, changes are also being made from some less expected sources. According to a February 2018 report from The New York Times, gun lobby group the National Rifle Association (NRA) announced on Oct. 5, 2017 that it endorses tightening restrictions on bump stocks, which are devices that replace a rifle's standard stock with a device that allows semiautomatic guns to fire faster. Bump stocks entered the national conversation after the Route 91 shooting in Las Vegas, Nevada, in October 2017, when a shooter using the device killed 58 people at a country music festival, and the issue re-emerged after the Parkland shooting. However, despite the NRA's endorsement, bump stocks are still legal on a federal level.

But while states and some other groups have made moves, at the federal level, things look different. There have been some changes, with Trump signing the Fix NICS Act to try to plug holes in the background check system, as well as the STOP School Violence Act which promoted anti-violence training (but not gun control) in March 2018. However, there has been no major push towards some of the more central demands, like universal background checks or closing of the "gun show loophole" which allows certain types of gun purchases without a background check. And the Centers for Disease Control and Prevention (CDC), the largest public health organization in the United States, is still effectively prevented from funding research into gun violence via the more than 20-year-old Dickey amendment, which effectively equated gun violence research with gun control advocacy. Although in March 2018, congressional Republicans clarified that the CDC was not prohibited from the research, the amendment was not changed.

Some of what has been proposed is controversial. In response to calls for gun control, President Donald Trump suggested in February 2018 that teachers and other school employees arm themselves with firearms in efforts to make schools safer. In December 2018, the United States Department of Education (DOE) released a school safety report commissioned by Trump that included recommendations like arming schools, managing access to campus, and addressing student mental health, but did not include key gun control demands made by Parkland students after the shooting. Trump's proposal for arming teachers has resulted in numerous criticism and protests among the public, members of nationwide school boards and politicians including Florida Sen. Marco Rubio.

Meanwhile, the problem remains. An Everytown report released on Feb. 1, 2019 found that gun-related deaths within the United States are a whopping 10 times higher than that of other high-income countries, with over 36,000 Americans killed by gun violence each year, and 58 percent of American adults who have experienced gun violence in their lifetime. Looking at the calendar, the problem is still clear — in the 10 months following the Parkland shooting, there were at least four more mass shootings, with 10 people killed at Santa Fe High School in Santa Fe, Texas in May; five at the Capital Gazette newspaper office in Maryland in June; 11 at the Tree of Life synagogue in Pittsburgh in October; and 12 at the Thousand Oaks shooting in California. That number does not include the estimated 22,000 that die by suicide with a gun, or the estimated 12,000 others who are killed.

While the debate continues, young people aren't giving up. Following the shooting, many students stood up to form organizations in response such as Students Demand Action (SDA), a student activist branch of Moms Demand Action, which is itself part of Everytown For Gun Safety. Juliana Simone, 16, leads the Miami chapter of Students Demand Action, and first got involved three days after the Parkland shooting. In her chapter, Simone and her fellow 150 members organize rallies, benefit concerts, and spend their time calling their representatives to demand gun reform.

"It's changing everyday," Simone tells Elite Daily in an interview. "I was so inspired to step up and take action because of the kids in Parkland who are using their voices, and I feel more people my age are stepping up too."

As a Florida resident, Simone has witnessed firsthand the gun reform changes happening in her state. While she thinks raising the age requirement and banning bump stocks is positive, she still recognizes Florida still faces challenges.

"We're making change, but Florida is hard," Simone says. "It's interesting. There's a change definitely in Miami, but it's definitely harder to bring up the conversation. In Miami, it's easier to talk about gun violence and gun safety, but in other parts of Florida we need to work on that."

Students aren't the only ones taking action. According to CNBC News, more than two dozen pro-gun advocates lost their seats in Congress in the 2018 November midterm elections and have been replaced by Democrats who ran on a gun safety platform. Among them is new Georgia Rep. Lucy McBath, whose son was shot and killed in 2012. In addition, presidential hopefuls are also chiming in with their support of stricter gun laws. California Sen. Kamala Harris, who announced her presidential run in January, has spoken about supporting "common sense" gun control.

“Assault weapons shouldn't be walking the streets of a civilized country," Harris said during an interview with The Breakfast Club in 2018. "We should have universal background checks. It makes sense.”

While changes are being made on local and state levels, it really takes federal change to make the United States a safer place for the future. There's no telling whether we'll see change happen in 2019, but even if we don't, there's a strong chance 2020 could lead to some major shifts in gun reform. Here's to looking towards the future.

Want to learn about the gun reform movement? Visit Everytown For Gun Safety to get the full scoop.