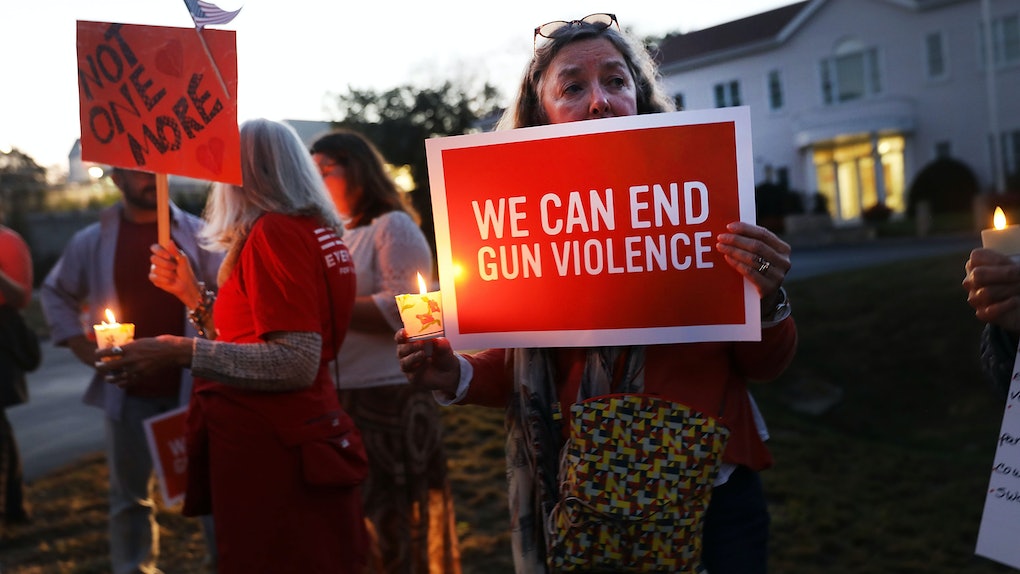 What Are Bump Stocks? A New Law Would Ban This Gun Accessory After Las Vegas Shooting

In the wake of the deadliest massacre in U.S. history, many are asking for major action — and they don't want to wait A piece of legislation has been introduced that could ban bump stocks, the same gun accessory used by the Las Vegas shooter who opened fire on 22,000 people in Las Vegas. So, what are bump stocks, and how exactly will banning them stop further tragedies? Well, for starters, any law limiting accessories that can cause sweeping casualties is an excellent step indeed.

On Monday Oct. 1, a man stood on the 32nd floor balcony of the Mandalay Bay Resort and Casino and opened fire on an outdoor concert below. He killed at least 59 people and injured over 500, according to The New York Times.

Authorities say the gunman had at least 23 firearms in his hotel room. Twelve of those weapons had been modified with bump stocks, which convert semi-automatic weapons into automatic weapons, allowing the gun to shoot a rapid succession of bullets with just a squeeze of the trigger. The modifier allows the gun to fire far more bullets far faster than it would otherwise — which in this case, translated to more people who were shot.

Sen. Dianne Feinstein (D-CA), who introduced the bill, was quick to spring into action following the massacre, tweeting out that there needs to be major legislative changes made in response to this senseless tragedy.

Feinstein took action on Oct. 4, introducing a piece of legislation that would ban the selling, exchanging and importing of bump stocks. She said during a press conference,

“There’s no better way to honor the 59 people who were slaughtered than to take action,” Feinstein added.

Owning fully automatic weapons has been against U.S. law since the Firearms Owners Protection Act was enacted in 1986. That means that bump stocks, though legal, present a weird, unfortunate loophole. Sam Rabadi, a retired Alcohol Tobacco & Firearms special agent, explained to CNN that though the modifiers are technically legal under 1934's National Firearms Act, the accessories didn't actually exist at the time. He said,

As technology has come through in the last number of years I believe the original authors of the act probably did not envision this kind of accessory being used for modifications of this sort.

More than two dozen of Feinstein's Democratic Senate colleagues have already co-sponsored the bill. Others in the Senate have said that they need to learn more about bump stocks before making their decision.

"We'll get hold of some folks in the industry and find out what they do and we'll look at Dianne's bill and make a decision in due time," Sen. Jon Tester, (D-MT) said, per CNN.

The bill even got surprising potential support from Sen. James Lankford (R-OK), who told CBS News that he would "take a look at" the issue of bump stocks. He added,

I own probably more guns than most members of Congress and that was the first time I'd ever heard of a bump stock. There is a prohibition against automatic weapons … anything that would try to make it an automatic weapon would need greater scrutiny, let's put it that way.

Other Republican senators, however, have been far less open-minded. On Oct. 3, Senate Majority Leader Mitch McConnell (R-KY) brushed off discussions of any sort of policy changes. He said, per Politico,

I think it's particularly inappropriate to politicize an event like this. The investigation's not even been completed. And I think it's premature to be discussing legislative solutions if there are any.

Speaker of the House Paul Ryan (R-WI) also dodged questions on the topic of gun control, according to Politico, though, he did offer some prayers.

On a TOTALLY unrelated note, here's a handy dandy guide from The New York Times on how much money each Republican senator (and a handful of Democrats) received from the National Rifle Association. You know, just for reference.

More like this
What Is An AirTag Loop? This Apple Accessory Is A Versatile Option
By Cianna Garrison
These Tweets & Memes About The Purple iPhone 12 Are Seriously Hype Over The Hue
By Lara Walsh
The Best "Just Because You're Vaccinated" Memes With Iconic Pop Culture References
By Lara Walsh
Stay up to date