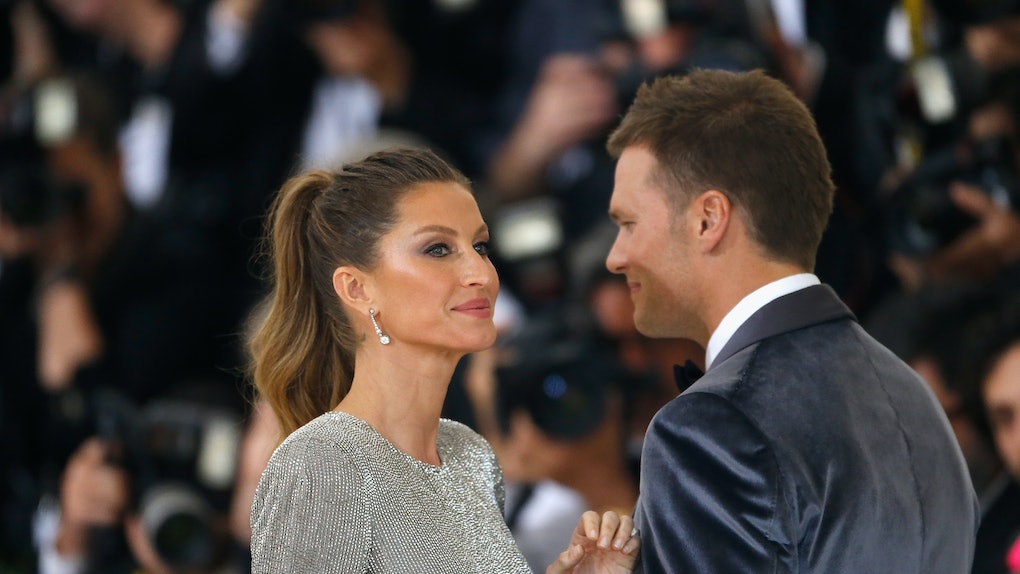 We all witnessed history at the 2018 Super Bowl. The Philadelphia Eagles took home the trophy for the first time ever. One kid snapped an epic selfie with Justin Timberlake. And, in a bizarre turn of events, Tom Brady lost a football game. THE Tom Brady. Luckily, his wife, Gisele, was there to pick him up. Gisele Bündchen's reaction to Tom Brady losing the Super Bowl is super sweet, and a little reminder of how strong this power couple really is.

TBH, I can't even imagine what it feels like to be Tom Brady. Like, at all. We don't have one thing in common. He's a football hero. He's had an outstanding career as a professional athlete that's thrived way past the average professional athlete's "due date." He's married to arguably the most famous supermodel in the world – maybe even of all time. I suspect that comes with a lot of pressure. But also, wouldn't you guys agree he's always come across a little... IDK... cocky? It was a weird thing to watch him lose in such a close game on Sunday, Feb. 4, and almost poetic to see him get tackled again and again in slow motion.

(Full disclosure, I was rooting for the Eagles all the way. Go birds.)

Bündchen was quiet in the immediate hours after the game, which I suspect is due to the support and comfort she was probably giving to her hubby. The following morning, on Feb. 5, she shared a touching message on social media.

Bündchen posted a picture on Instagram which clearly featured an emotional Brady. She wrote the caption:

Congratulations Eagles for winning the Super Bowl, what a game that was! Congratulations Patriots for giving your best and to my love, we are incredibly proud of you because we are able to see ever day all the commitment, sacrifice and hard work that you have devoted to become the best in what you do. We love you! [Heart emoji]️ Parabéns Eagles por ganhar o Super bowl, que jogo! Parabéns Patriots por dar o seu melhor e ao meu amor, estamos incrivelmente orgulhosos de você porque vemos todos os dias o compromisso, o sacrifício e o trabalho árduo que você dedicou parase tornar o melhor no que você faz. Nós te amamos!

Sweet, no? I mean, what else could she possibly say?

In the post-game press conference, Brady reflected on the Patriots' loss and his career. He said,

It's tough to lose these games, but again, you can't win the game if you're not in the game, ya know? You play to win but sometimes you lose.

I give the Eagles a lot of credit. They played a great game, they had a great team, and those guys played really well... I expect to be back. It’s 15 minutes after the game ended, so I would like to process this. I don’t see why I wouldn’t be back.

YOU HEAR THAT, PUBLIC? THE MAN NEEDS A MINUTE. EVERYBODY STEP BACK SO HE CAN POUT.

I don't know what the day after the Super Bowl looks like in the Brady/Bündchen household, but it's nothing but hangovers and stale tortilla chips over here. Maybe this is Brady receiving his final karma for the great Deflategate after all these years. He even said during the press conference, "No one is going to feel sorry for us."

In the end, the Eagles won 41 to 33, and Brady continued to be rich, famous, and married to a supermodel.