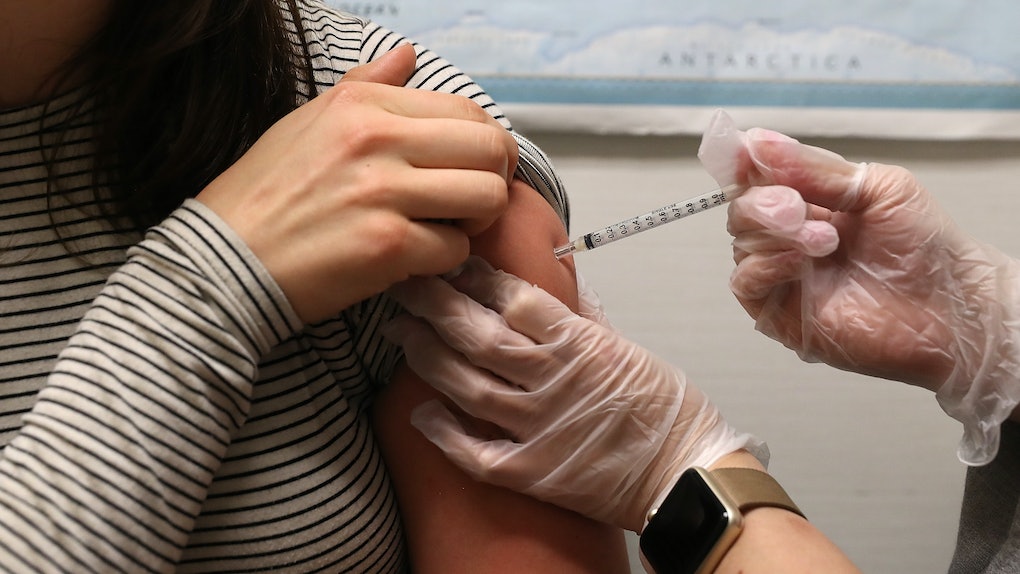 Getting The Flu Shot On Your Period Is Nothing To Worry About, According To Experts

Whenever I'm on my period, my health concerns are pretty much confined to period problems: what to eat to replenish my energy levels, how to fall asleep faster so my body can recuperate, and what gentle exercises might ease my cramps. But as you know, if you've ever been in that horrific position of battling both menstruation and sickness at the same time, juggling that much discomfort simultaneously is pretty awful. All of that being said, is getting the flu shot on your period a good idea, or will it just make things worse?

I have to admit that I am definitely one of those people who feels all but invincible until the moment I start to get seriously sick, so take a lesson from my mistakes, and don't wait until you've come down with the flu to get the vaccine. Besides, according to a recent report from the Centers for Disease Control and Prevention, the 2017-2018 flu death toll hit a record high, which means preparing yourself for the upcoming flu season has never been more important. And according to Chirag Shah M.D., a board-certified emergency medicine physician, you really can't use the "I'm on my period" excuse to procrastinate getting the vaccine any longer.

"Other than any standard things one does while menstruating, there are currently no significant additional recommendations as far as getting the flu shot," Shah tells Elite Daily in an email.

Now, while there's nothing significant to worry about when it comes to the flu shot and your menstrual cycle, there are a couple of things worth considering. For instance, one important thing to be aware of is how your iron levels can affect your body's reaction to the flu vaccine. "More research needs to be done, but there was an old study in rats suggesting that antibody production by the immune system after the flu shot is diminished in states of severe iron deficiency," Dr. Shah explains. In other words, if you're losing blood during your period, are you also losing iron, and therefore affecting how your body responds to the flu shot? According to Shah, that could possibly be the case for some people, but he says it's really not likely.

In fact, your body is pretty amazing with that kind of stuff, because according to the Iron Disorders Institute, your iron regulatory system is likely already working to counteract things like menstrual-related blood loss. "A woman’s natural iron regulatory system takes care to increase absorption of iron from her diet during these times of blood loss," the institute explains. Basically, your body's normal iron absorption rate — which is about one milligram — is heightened to about 1.5 to three milligrams per day during your menstrual cycle, which is what helps to counteract some of the effect of the blood loss.

Another thing to consider in terms of your period and your flu shot is how to deal with the actual pain of getting the vaccine. According to Dr. Shah, there are no strong data to suggest that the shot will make your PMS symptoms worse. However, he tells Elite Daily, "the flu shot can cause pain and soreness at the site of injection, which might make one choose to get it at a different time of the month."

In other words, you might perceive the pain and soreness from the shot differently if you're on your period — and there's actually some evidence to support that idea. In a study published in the academic journal Perceptual and Motor Skills, researchers analyzed the pain perception of 20 women during their menstrual cycles, and they found that the participants rated their pain significantly higher during the menstrual and premenstrual phases of their cycles.

“[Menstrual hormones] really do increase the sensitivity of the skin,” Jessica Shepherd, M.D., an assistant professor of clinical obstetrics and gynecology and director of minimally invasive gynecology at The University of Illinois College of Medicine at Chicago, told Women's Health. So, if you're someone who's already sensitive to shots, you might feel the effects of the flu vaccine needle more intensely during your period.

And BTW, you may have heard that getting your flu shot right before you're supposed to start your cycle can delay your period, but according to pediatrician Dr. Molly O'Shea, this isn't scientifically accurate. "The flu shot shouldn’t affect your hormones and doesn’t make you sick — so it can’t delay your period," she wrote in a Q&A response to a question posed on the U by Kotex website. So if you notice that your period is late after getting the flu shot, Dr. O'Shea said it's almost definitely due to something else, so it's best to check in with your doctor to figure out what's going on.

Bottom line: Go ahead and fight the period stress with plenty of PMS-comforting foods, and you'll be totally prepared for the flu shot.

More like this
The TikTok Recipe You Should Try, Based On Your Zodiac Sign
By Chelsea Jackson
These 40 Clever Vaccine Selfie Instagram Captions Deserve A Shot On Your Feed
By Rachel Chapman
12 Best Mother's Day Brunch Delivery Gifts That Mom Will Love A Waffle Lot
By Rachel Chapman
Stay up to date