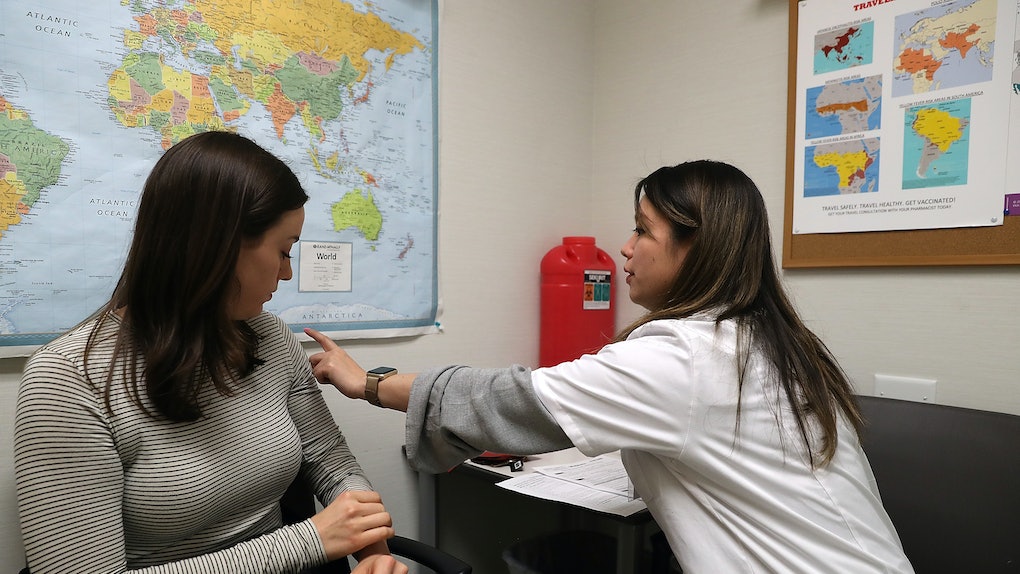 The Best Time To Get The Flu Shot Is ASAP, Says One Doctor, So What Are You Waiting For?

As beautiful as fall is, it also signals the oncoming season of sneezing, coughing, runny noses, and germs galore. That's right, y'all — flu season is upon us, and the last thing you want is to come down with a case of this nasty viral infection. So when is the best time to get the flu shot? Can it wait 'til we get closer to the holiday season, or should we all start preparing for the flu ASAP? Look, a girl's got questions, and that same girl's not so keen on needles, so I need some answers.

Well, I've got some answers, but if you're as skeeved out by needles as I am, you might not like 'em. According to Dr. Edo Paz, clinical director at Heartbeat Health and medical advisor for the free primary health care app K Health, the best time to get the flu vaccine is during the fall season — aka right now — in order to help prevent the virus from plaguing your immune system.

"The Centers for Disease Control and Prevention (CDC) recommends getting the flu vaccine by the end of October, in time to develop protection before the flu begins to spread in your community," Dr. Paz tells Elite Daily over email. "It takes two weeks after you get vaccinated for antibodies to form, and it is these antibodies that will protect you from the flu virus."

Additionally, the CDC recommends that everyone 6 months and older receives a flu shot, and, according to Dr. Paz, you need to get a new vaccine every flu season, as he says "this is the best way to reduce the risk of flu illness and hospitalization."

It's totally normal to want to know more about the vaccine before you jump right in and go get the injection, though, and thankfully, Dr. Paz has broken down exactly how the specific "strain" (which is basically just a recipe for what goes in the flu shot) is picked for flu shot vaccinations each year.

"Strains included in the flu vaccine are selected based on strains doctors and researchers think are the most likely to circulate during flu season," the doctor explains over email. "Dozens of influenza centers around the world are constantly conducting surveillance for influenza."

After this global research is completed, Paz explains, the World Health Organization takes all of the data, and considers some other factors — like the availability of vaccine viruses — before it makes a recommendation on the composition of the influenza vaccine. According to Paz, each country then makes its own decision about which viruses to include in its licensed vaccines. "In the U.S., that decision is made by the FDA [before] the private sector creates the vaccines," Paz explains.

Aside from the logistics behind the shot, there's also the pretty common fear of getting sick after receiving the flu vaccine. It seems like everyone has that one friend who somehow got sick right after getting their flu shot, so honestly, you can't help but be a little worried it'll happen to you, too. What's the deal there?

"After getting a flu shot, it’s common to get soreness, redness, and tenderness where the shot was given," Dr. Paz tells Elite Daily. "It is even possible to get a low-grade fever, headache, and muscle aches — however this is not the flu. Flu vaccines are made from flu viruses that have [been] inactivated — or with no virus at all."

Basically, Dr. Paz is saying that the flu shot is, overall, pretty safe, and you're probably going to be in good hands if your doctor is recommending you get it. And while it's very unlikely that you'll get the flu after receiving the shot, it's still technically possible, according to the CDC, which states that "the flu vaccine can vary in how well it works and some people who get vaccinated may still get sick," so you'll still want to be on the lookout for symptoms in the two weeks or so after you've gotten vaccinated.

To that point, it’s often difficult to distinguish between the flu and the common cold — even for well-trained doctors, Paz tells Elite Daily. "Both can involve fever, nasal congestion/runny nose, cough, and sore throat, [but] in general, flu symptoms tend to be more severe, more rapid in onset, and last longer." Because it can be so hard to tell apart the flu and the common cold, Dr. Paz says it's always a good idea to visit your doctor to get everything figured out.

Additionally, according to Paz, you should also see your doctor if you start experiencing symptoms like difficulty breathing or chest pain, a high-grade fever or a fever that doesn’t improve with over-the-counter treatments, difficulty holding down food/liquids, or if your symptoms are lingering longer than expected. He tells Elite Daily, "These might indicate the flu or another potentially serious medical problem."