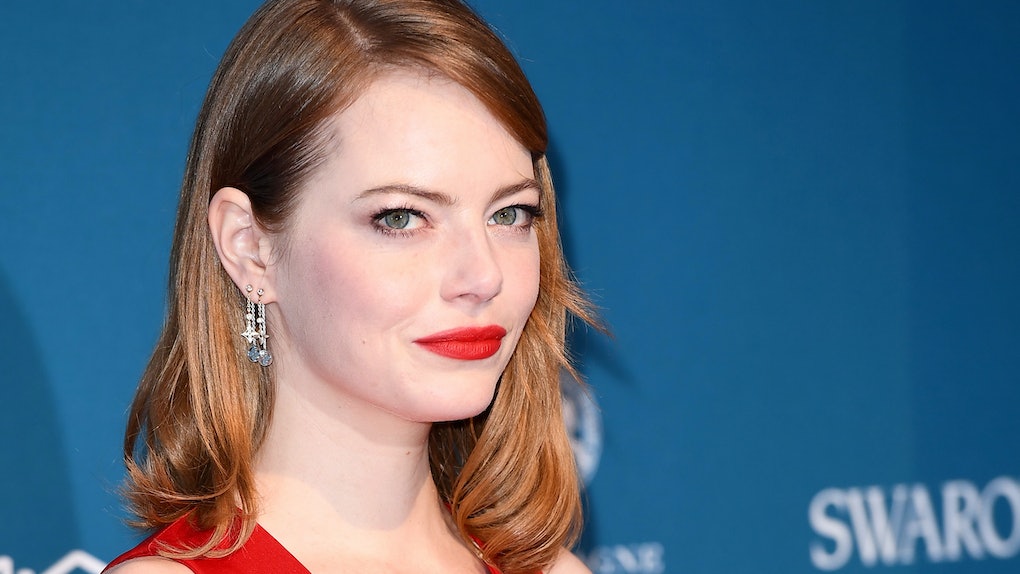 When it comes to celeb hair changes, we're talking power moves only! It's almost as if actresses Katherine Langford and Emma Stone were in a group chat discussing hair transformations and decided to do a swap with each other. Just as Langford made the switch from brunette to firey red, Emma Stone's new dark brown hair is here to replace her signature reddish auburn strands, and spoiler alert, the new hue looks incredible. It's not the first time she's made a major hair change, but this might be her boldest look to date, and it's by far one of her best.

After showing off her go-to hair color and sporting super-polished, elegant waves at the 2019 Golden Globes just recently, Stone showed up to the 30th Annual Producers Guild Awards with a completely new look. Her locks were a rich chocolate brown, and her intricate updo had me momentarily wondering if she'd gotten an asymmetrical cut. Stone wore a simple, pale yellow gown so that her new hair would be the center of attention, and let's just say she succeeded in landing all eyes on her.

As a reminder, here's what Stone's strands looked like just a few weeks ago, at the 2019 Golden Globes:

And here's a first look at her new brunette strands at the PGA Awards:

So edgy and incredible, right? As a complete contrast to her soft, ladylike Golden Globes waves, this dark updo has a wet-look feel and tons of texture. I almost didn't recognize her! Because her hair is up, I can't entirely tell what new haircut she's rocking to accompany the hue — are the tendrils up front long bangs, or has she gone for an overall lob look? I want-slash-need to know more.

While her red hair is definitely her signature look, Stone has definitely experimented with her hair color and cuts in the past, and is certainly not afraid to take a few risks. Still, the majority of her most iconic roles, from La La Land to Easy A, feature her red strands as a defining feature.

2017's bombshell blonde hair was a personal favorite of mine:

And who could forget the pixie cut that graced the cover of Vogue back in 2016?

There's no word yet on if Stone's latest look has to do with an upcoming role, or if she just needed a change. Personally, I'm eagerly awaiting more details, as whoever took her dark deserves some major credit. While red is her signature, Stone is in fact a natural blonde, so the decision to go brunette is a major one that isn't quite so easy to seamlessly reverse. Not that she'd want to anytime soon, since it looks so damn wonderful.

According to Twitter, her new brunette hair is a hit:

However, some fans still favor her OG look:

While others are just trying to keep up:

Never before have celebs been so into changing up their looks, and honestly, I love not knowing what they'll look like until seconds before they hit the red carpet! Stone's new look is definitely a personal favorite, and I'm excited to see more edgy, bold looks to accompany her fierce 'do throughout the rest of this awards season.