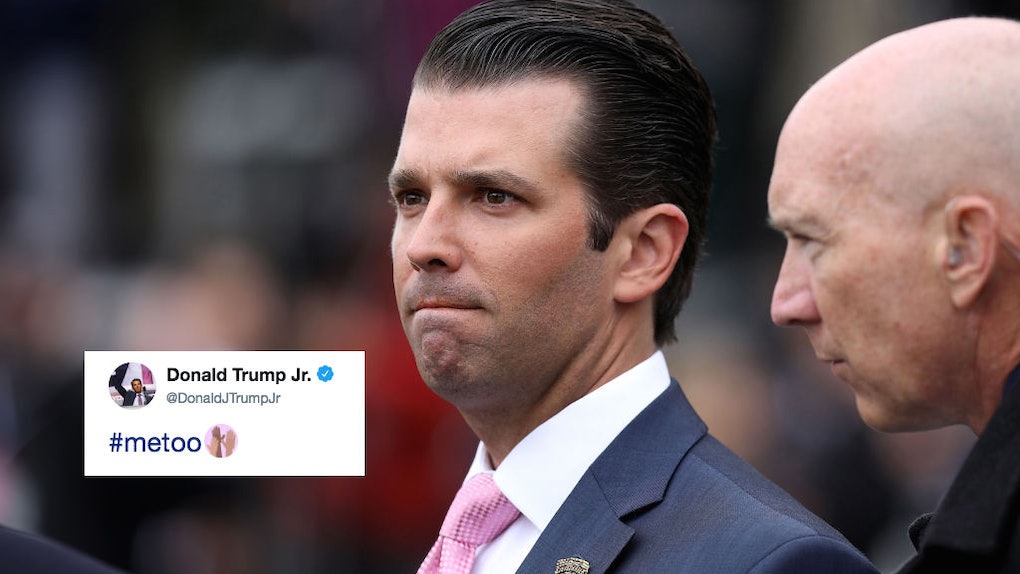 Donald Trump Jr.'s #MeToo Tweet Is So, So Wrong

Donald Trump Jr. is back again with another poor attempt at a sarcastic tweet. Late Tuesday night, April 3, President Donald Trump's eldest son sent a tweet using "#MeToo," the hashtag used to galvanize a movement that is about sharing stories of — and combating — sexual assault and sexism. There's just one problem: Donald Trump Jr.'s #MeToo tweet had nothing to do with any of that.

Instead, it was just a petty jab at President Barack Obama. Trump Jr. sent the tweet shortly before midnight on Tuesday, while responding to a Washington Examiner article about President Obama. The article features quotes from a recent interview with Josh Earnest, Obama's former press secretary and a former Obama campaign official.

"It’s obvious to most people who are watching that he is relieved to no longer be bearing the burden of the presidency," Earnest says in the interview. "I think there's no doubt that he is more relaxed and more at ease and more unburdened than he's been in a decade, and it shows."

In tweeting about the interview, The Washington Examiner keyed in the notion that Obama is "'relieved' to no longer be president." Donald Trump Jr.'s response? #MeToo.

Yeah, that's not what the hashtag is for.

But it isn't the first time Trump Jr. has wildly grasped at straws looking for a #SickBurn on snowflake lefties (or something like that). A week prior, the 40-year-old Trump Org exec sent a totally serious tweet about the type of Disney princess "we need."

"We need Disney princesses that let kids enjoy childhood rather than subjecting them to never ending identity politics," Trump Jr. tweeted, referencing a trending internet meme that literally had nothing to do with politics.

Not everything has to be a war on "the left," Donny.

Anywho, about that Josh Earnest interview on Obama, and the former president being "relieved" to be out of office: Can you say, "duh"?

Then there's the fact that President Obama leaps in and out of politics when he wants to, instead of having to answer to the media daily, which can't be fun for any president.

The most recent example of an Obama cameo came during the March For Our Lives. "Michelle and I are so inspired by all the young people who made today’s marches happen," Obama tweeted on the day it was held. "Keep at it. You’re leading us forward. Nothing can stand in the way of millions of voices calling for change."

In his recent interview, Earnest said those are the types of public statements that people can expect more of going forward.

“My sense is that he was watching what those young people were doing under extraordinary circumstances and was genuinely impressed and inspired by their maturity and their passion,” Earnest told The Hill. “This is an example of him wanting to use the influence and currency that he has to encourage the students in their efforts but also to hold them up as good examples of what passionate citizens can accomplish in a democracy.”

As for Donald Trump Jr., he and Vanessa Trump were spotted together again at the White House's Easter egg hunt, despite tabloid stories about drama around their divorce.

See? There's good news all around, except when it comes to Trump Jr.'s tweet. That was really bad.