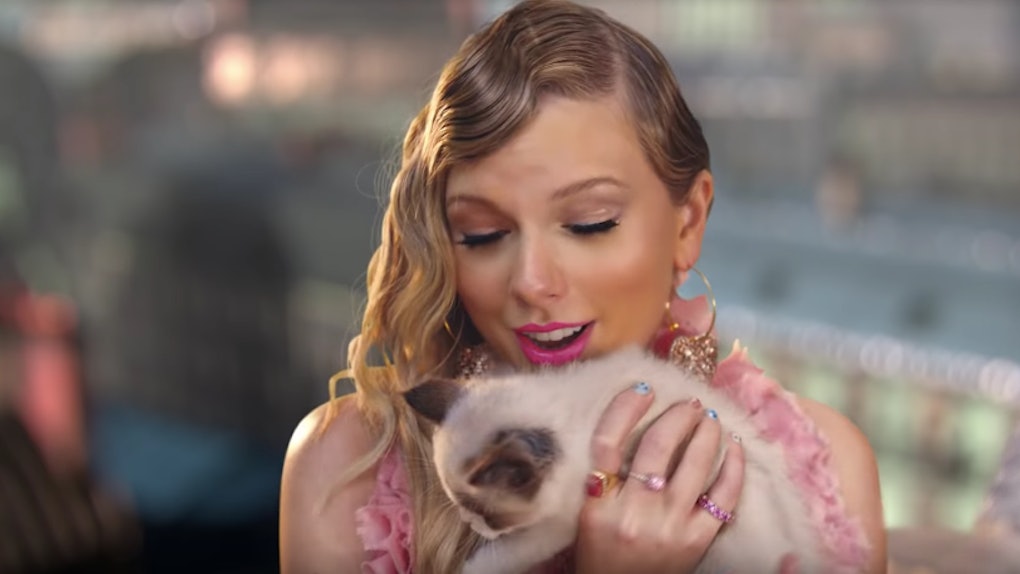 Taylor Swift’s new era has arrived, my friends, and OMG — it’s a lot to take in. At midnight on Friday, April 26, Swift dropped the song “ME!” featuring Brendon Urie of Panic! At The Disco, along with a pastel-colored, sugary sweet music video. In her typical fashion, Swift has been teasing intricate clues about the new music for weeks, and fans are now wondering, does Taylor Swift's "ME!" music video reveal she's engaged? It’s not totally clear, but the theories are solid, and if it’s true… this might be the biggest secret she’s ever divulged in her music.

Hours before the song came out, Swift told viewers on YouTube chat that there was big news hidden in the video. “Oh and there’s a secret in the video I’ve been keeping for months — let’s see who can guess it,” she wrote. Naturally, the internet erupted with theories and questions. There’s a scene in the video where Urie tries to propose to Swift with a ring, and she rejects it — only to accept a new kitten from him instead. As soon as fans saw this, they freaked out. Is she engaged to longtime boyfriend Joe Alywn, or did she get a new kitten? I need answers, people!

Clearly, no one is OK with these mixed messages. What does it all mean?! Hours after the video's release, Swift confirmed that the new cat theory is real, tweeting a selfie with the kitten and the caption, "And then there were three…"

But what if there are two big surprises hidden in the video? While the cat proposal scene alone may not be enough to convince you that Swift and Alwyn are tying the knot, there’s a subtler clue that gives the engagement theory even more weight.

Early in the video, Swift is seen strutting down a hallway while she sings the first verse. Because her fans have FBI-level detective skills, they noticed that she’s wearing what appears to be an engagement ring on her left hand. Proof is in the screenshots below:

Now, to be fair, Swift and Urie are playing a married French couple during the opening scene, so this ring could be part of her costume for the video. But also, it would be typical Swift style to drop a super subtle clue like this that represents something more significant. Time will tell if she decides to reveal what the big secret really is.

If it’s an engagement, it wouldn’t be all that surprising — Swift and Alwyn have reportedly been super serious for a while now. They were first spotted together in June 2017 in her hometown of Nashville, and since then, they’ve kept an extremely low profile as a couple. Like, they’ve never even officially confirmed their relationship or attended an event together. But Swift’s ever-diligent fans have picked up on hints over the years that Alywn and Swift are going strong.

Last month, an insider source told Us Weekly that an engagement was on the horizon, saying, "Taylor really believes Joe is the one for her ... She wants to get engaged to him." Another source went so far as to comment on the type of engagement ring Swift is hoping for: “Taylor isn’t interested in a big obnoxious ring ... She’d like something elegant and simple.” Maybe I'm leaning way too hard into this fan theory, but that engagement ring in the "ME!" video is pretty classic, no?

Unfortunately, fans will have to wait until Swift drops more clues before they can figure out for certain if she’s engaged IRL. Whether it’s a new kitten or a committed future with Alwyn, Swift sure seems like she is living her best life, and I am here for this new era of self-love and creativity.