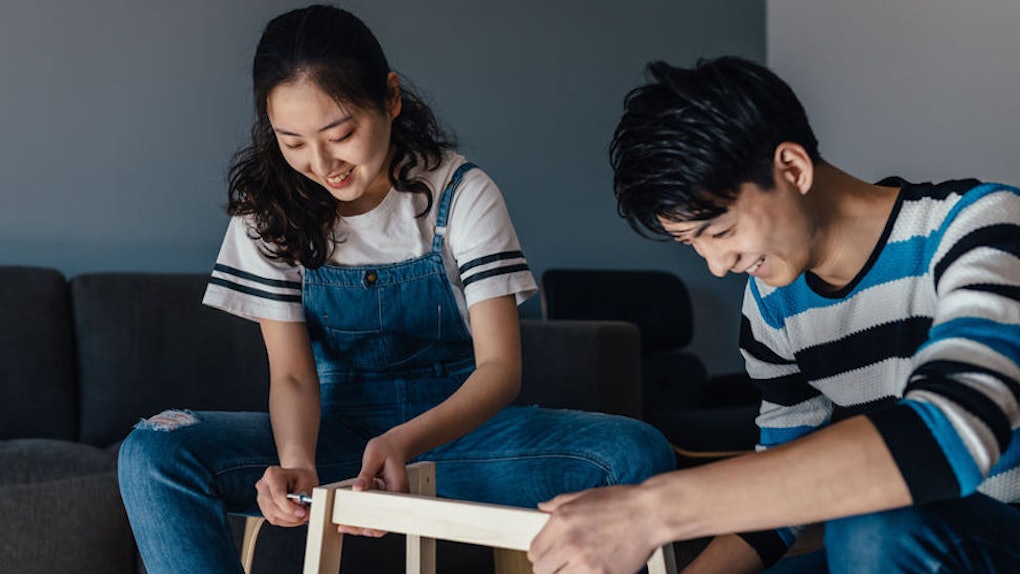 Do You Have To Say "I Love You" Before Moving In Together? Here's What The Experts Think

One of the biggest decisions that you'll make in a relationship is whether or not to move in together, and when to do so. For some couples, it's an easy decision, but for others, it requires a lot of thinking and talking. There's really no one right way to do it, but many couples wonder if they should say "I love you" before moving in together. And it's a valid point. Moving in together is a big step, and while it might seem like a fairytale in some ways, there are a lot of wake-up calls that can happen when you start to live with your significant other.

And the thing is, there's not a one-size-fits-all way of knowing if you should move in with your partner. For example, my boyfriend and I moved in after dating for three months, and it was very natural. I had gotten a new apartment, and it was a little nicer than his, and in a better location for his work. Plus, we had just stayed at my place so often that the issue of moving in together was never even really an "issue." Sure, we talked about it before we put his name on the lease, but because we've both been extremely honest about our future together and what we want and when we want it, it was an easy conversation.

But, to be fair, at that point, we had already said "I love you." (Actually I said it via Bitmoji, but that's another story for another time, fam.) We'd discussed marriage, kids — the whole nine yards. So even though three months might not seem like long enough to know, it was enough for us.

Still, that doesn't mean that you have to say "I love you" before you move in with someone. According to Shira Etzion, marriage and family therapist, moving in together could actually bring out some feelings you might not know existed before. "Some manifestations of a relationship only happen once you are together in the same space with only each other to work through daily life in a home," Etzion told Elite Daily. "You really want to make moving in together a declaration that you are ready to discover those dynamics. The surprises are not always ideal and seeing your partner as imperfect becomes inevitable."

So basically, you could move in with someone before saying those three little words, and then they might come later.

Because obviously, you'll both want to be serious about each other, but "I love you" doesn't have to have happened just yet. What might be more important is being on the same page.

"Compare notes," Etzion said. "The most important thing is that these conversations happen honestly without judgment or blame. The worst thing is when a partner agrees on a big step in a relationship only to come back later and say they were 'forced' or 'had no choice' to say yes."

While it might be nice to hear "I love you" from your partner before you move in with them, it isn't a requirement. Really, it all comes down to your relationship. It's personal, and that's OK. However, trust is a huge part of any relationship, and if you're planning on moving in together, then that's something that should have definitely already been established.

"The best place to be in a partnership is to know that you are not depending on someone who you don’t feel safe with or trust to house you," Etzion said. Saying "I love you," is a big step, and whether or not you need to say it before you move in with someone is totally up to you. Maybe you've said it and you still don't want to move in, and that's fine. Maybe you haven't said it, but you want to move in, and that's fine too.

Additionally, Trina Leckie, relationship coach and host of the Breakup BOOST podcast told Elite Daily that practicing living together might be more important than saying "I love you."

"Often people get so caught up in the excitement of the idea of moving in together that they don’t take time to look at the big picture," she said. "I think it would be wise to do a minimum two-week test run where you stay together for 14 consecutive days (no breaks) to truly feel what it would be like to live together."

It's completely up to you and your partner to decide what's best for you, but just know what those three words aren't a requirement for co-habitating. Instead, have a mature conversation, follow your heart, and do what feels right. Don't let the "I love you" barrier keep you from moving in. Additionally, don't move in just because you love your partner. There's a lot that goes into it, and you have to do what's best for you and your relationship.