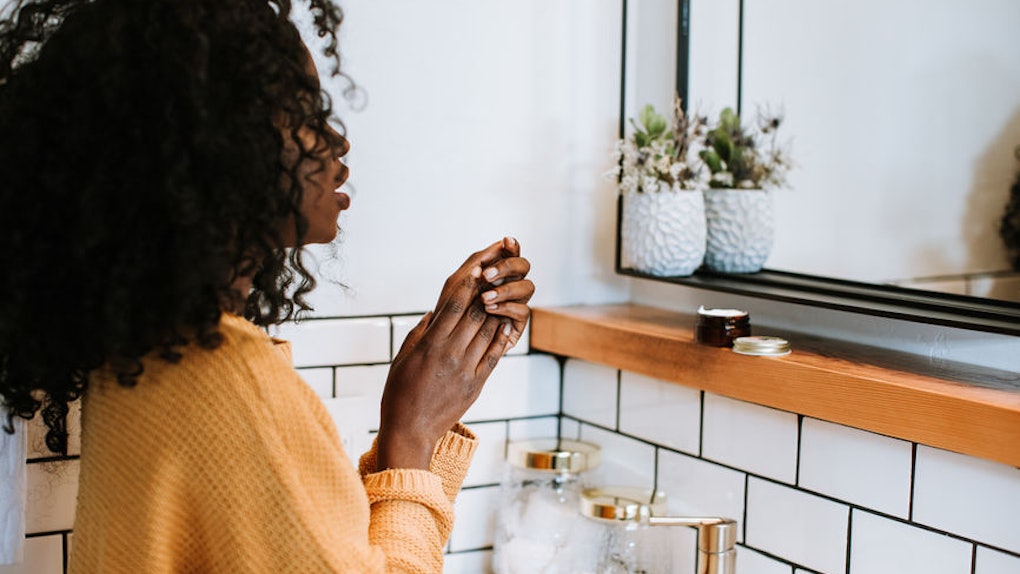 Do Dates Really Care About Your Messy Bathroom? According To Experts, It Can Say A Lot

So far, the date has been going splendidly — so much so, that you decide to invite them back to your place for a couple of saisons (and, fingers crossed, a steamy makeout). Just as you unlock your door, the panic sets in as you realize you forgot to clean your bathroom. You weren’t expecting company, after all. At some point or another, you may have wondered: Do dates really care about your messy bathroom? Will they be able to shrug it off, or could it hurt your chances of snagging that next date?

The data on this subject suggests that cleanliness matters more than you might think. One Rent.com survey of 1,000 single Americans found that 82 percent of respondents pay the closest attention to cleanliness in scoping out their date’s apartment, and a whopping 82 percent of women and 70 percent of men agreed that a messy abode was the top turnoff. Another 45 percent of respondents said that a clean bathroom was their biggest turn-on. It’s not just a turn-off, either — it could be a dealbreaker. A Handy survey commissioned by UC Berkeley Researcher Dr. Lindsay Graham found that 67 percent of people admit to looking at their date’s digs to see how compatible they are, and 15 percent would dump someone just because their home was a mess.

According to Dr. Gary Brown, a dating and relationship therapist in Los Angeles, the state of your bathroom may matter to some people more than others.

“Many people do care about a messy bathroom, and in particular if the bathroom is also dirty,” he explains. “Other people don't find it to be a big issue if there is a bit of dust or a washcloth that is not hung up. Overall, it really depends upon someone's tolerance for messiness.”

Those who are turned off by a messy bathroom are likely super tidy themselves, so they value that in another person. But let’s be clear: There’s a difference between having a lot of beauty products cluttering up your counter (guilty as charged) and having a grimy floor.

“Messy is one thing but dirty can pose potential health issues,” adds Dr. Brown. “Dirty bathrooms are a breeding ground for bacteria and mold.”

Then again, there are some people who might not be bothered by a messy bathroom. As much as I consider myself a highly tidy person, I would fall under that category, as long as the rest of the apartment wasn’t a total disaster. After all, it’s always possible that someone had a particularly hectic morning, and while rushing around, didn’t have time to tidy up their bathroom after showering.

The important thing to acknowledge is that your home can be a reflection on you as a person. Particularly in that early stage of seeing someone, when you’re trying to get to know each other better, it’s safe to say that your date may be eagerly absorbing any bit of information they can gather in order to determine whether you’re a good match. Your home can reveal a lot about you, and that includes your messy bathroom.

“A messy bathroom can say any number of things,” says Dr. Brown. “It could mean that it is simply not a big deal for you — that you simply don't care about messes. It could also be a sign that you are not considerate of the needs of others who have aesthetic desires to go into a bathroom that is clean, healthy, and inviting.”

Dr. Brown notes that sometimes, a messy bathroom can hint at other struggles as well — like depression.

“People who suffer from depression often have a difficult time maintaining good hygiene," he explains. "If depression is the culprit, oftentimes other areas of their home may also be messy, such as leaving their bed unmade or dirty dishes piling up in the sink."

Again, a messy bathroom (or home in general) definitely doesn't automatically indicate someone is depressed. So it's important to avoid jumping to conclusions about someone's mental health based simply on the state of their abode.

Clearly, your date’s reaction to your messy bathroom will depend on their personality and preferences. While one person may be totally unfazed by it, another may view it as grounds for ghosting.

“I think you have to ask yourself, ‘What message am I sending to a date if I don't care enough to at least clean up the bathroom?’” advises Dr. Brown. “My best advice is to get out your cleaning supplies if you’re concerned with making a good impression.”

The hope, of course, is that your date wouldn’t judge you merely by the condition of your bathroom. The hope is that they would give you the benefit of the doubt. This may be easier for someone to do after they’ve already gone on a handful of dates with you and they’ve gotten to know other attractive facets to your personality. On a first date, they may be less forgiving. Here’s the thing: If someone writes you off solely on the state of your bathroom, you may not actually be compatible after all. But just in case, you may want to tidy up. It’s better to be safe than sorry, right?