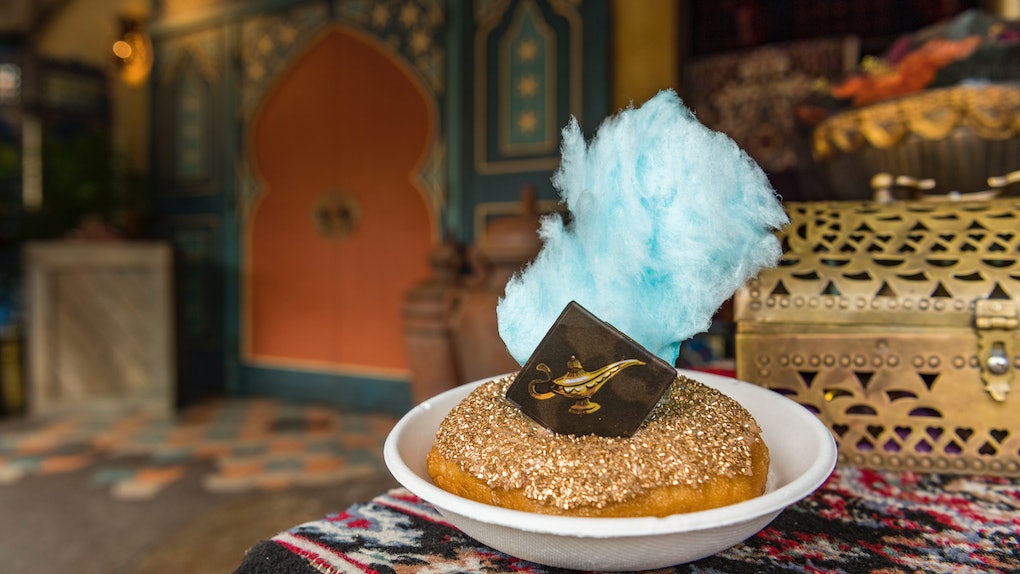 It's a whole new world for your tastebuds over at the Magic Kingdom, thanks to a 'Gram-worthy treat that looks like it was dreamed up by the Genie himself. With Disney's new live-action remake of Aladdin set to hit theaters on Friday, May 24, it's the perfect time to get seriously hyped before the film's release with all the on-theme theme park bites. Case in point: Disney World’s new Aladdin doughnut, which is appropriately called the Wish Granted Doughnut, is a blue cotton dream that I'd happily give up one of my three wishes to taste.

Starting on Wednesday, May 1, visitors at the Magic Kingdom can take themselves on a virtual trip to Agrabah, courtesy of Disney World's newest Aladdin-inspired doughnut. It's no secret that Mickey Mouse and Co. have the whole on-theme doughnut game on lockdown, paying homage to every '90s kid's favorite Disney movies with Princess Aurora Cupcakes, an Ariel-inspired Mermaid Tail Cupcake, a Tinker Bell Ice Cream Cone topped with pixie dust, and many more tasty options.

So, it's a big deal when I say that their newest creation — an edible tribute to the gilded Cave of Wonders — might be their most 'Gram-worthy choice yet, thanks to a poof of light blue smoke, or rather, cotton candy, that crowns the sweet treat. Judging from the photos, the doughnut is almost too pretty to eat — the glazed doughnut is layered with a carpet of glittery gold sprinkles to replicate the treasures that Aladdin found in the cave with an edible chocolate magic lamp perched on top. There's no need to rub the lamp to get your three wishes, because the Genie's presence has already been announced with a floating cloud of sky blue cotton candy that tops the specialty doughnut.

In other words, if you could use one of your wishes to ask the Genie to create the doughnut you didn't know you needed in your life, this is probably what it would look like. Just one word of caution: This dreamy confection looks like a bit of a handful, so I'd make sure to snap some shots for the 'Gram before you dig in with knife and fork and take your tastebuds on a magic carpet ride.

According to a Disney rep, you can head over to the Magic Kingdom's Sunshine Tree in Adventureland to try the Wish Granted doughnut, which will be available starting on May 1. That's plenty of time to get your cotton candy and doughnut fix handled before Aladdin flies into theaters on May 24.

Still, this is one case where the adage nothing good lasts forever definitely applies, because just like the elusive Genie, this limited-edition sweet is only available until Sunday, June 30. That means you have about two months to get in on the doughnut of your dreams without having to find a magic lamp or summon a Genie, so I'd make sure to take full advantage of that before the photogenic pastry flies out of the Magic Kingdom.

More like this
What Is Taco Bell's Times Square Digital Cantina? It's A Unique Experience
By Lara Walsh
Here's How To Make Chipotle's Dragon Sauce With 2 Simple Ingredients
By Daffany Chan
What's In Kellogg's & GLAAD's Together With Pride Cereal? Expect Berry Flavors
By Daffany Chan
Stay up to date