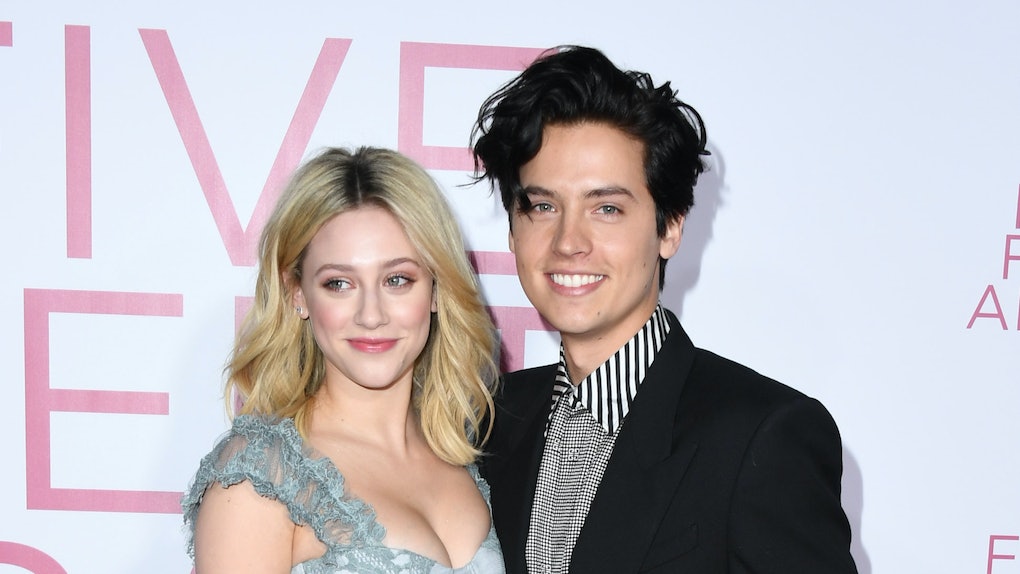 Nothing is more exciting for fans than an on-screen romance that becomes reality. When Riverdale stars Cole Sprouse and Lili Reinhart went public with their romance, fans were thrilled. The two dated for three years, serving looks on red carpets together and endlessly gushing about each other on the 'Gram. But, somewhere along the line, things got murky, and the pair called it quits in March 2020. Now, it's bittersweet to take a look back at Cole Sprouse and Lili Reinhart's social media exchanges.

Sprouse shared an emotional message about their breakup to Instagram on Aug. 19, saying he will always wish Reinhart happiness. And while his Instagram about their breakup was pretty straightforward, not all of the couple's other social media exchanges through the years were. Buckle up for this roller coaster ride.

In one of their first public outings together, Sprouse and Reinhart embarked on a boating trip with Sprouse's famous twin brother, Dylan, proving Reinhart had become close enough to Cole to be introduced to his closest kin.

"This picture was taken before I got the worst sunburn of my life. Thanks for looking out, boys," Reinhart cheekily said when sharing a memory on Instagram from the day.

Even before they were officially dating, Reinhart and Sprouse's friendship seemed flirtatious. Despite calling him her "pal" on his birthday in 2016, the two leaned in close for a photo, looking very coupley.

Their relationship seemed to really heat up that December when Lili retweeted a photo of Sprouse's face. "Hey what highlighter do you use?" she jokingly asked Sprouse, to which he responded, "yours."

By 2017, Sprouse and Reinhart did little to hide the amount of time they spent together. Sprouse boldly posted a gorgeous black and white photo of Reinhart frolicking through an endless field of flowers to Instagram.

Reinhart posted a pic from their day together to her page, too. She captoned the post, "Thank you for indulging me," and tagged Sprouse. This would be one of many times Reinhart modeled for Sprouse's lens throughout their relationship.

Before making an appearance together at Wizard World Comic-Con on June 2, Reinhart made a public remark about the seating arrangement and her proximity to Sprouse. "Sh*t I have to sit near that daddy-wannabe?" she tweeted. But Sprouse didn't miss a beat and poked fun at her right back. "Coming from someone who scrambled to get on my flight earlier," he replied.

Later that month, the pair continued poking fun at each other. When Reinhart wished Riverdale co-star KJ Apa a happy birthday on the wrong day, Sprouse didn't let her live it down.

"You know his birthday is tomorrow right... even google got it wrong... I'm the only ~real~ friend here," he tweeted on June 16.

The comedy between Sprouse and Reinhart continued into 2018, when he jokingly tweeted, "I cant wait to be a mommy someday." Reinhart soon replied by saying, "You've admitted defeat," and her beau got crafty with his response.

"Sorry I didn’t reply quicker, your notification got a little lost down the feed," he said alongside a screenshot of both their follower counts.

Reinhart and Sprouse raised eyebrows after attending San Diego Comic-Con. Following the convention, Reinhart took to Instagram with a photo from the event, but her caption led fans to wonder whether there was bad blood brewing. "Please don’t put me between these two ever again," she captioned the pic. A few days later, fans would find out new details surrounding Sprouse and Reinhart that would confirm their theories.

In a major twist, Reinhart and Sprouse graced the cover of W Magazine's August 2019 issue as a couple. While they looked booed up in the photos, they reportedly asked to be interviewed separately, and the magazine reported the couple had broken up after two years of dating.

This didn't sit well with Sprousehart, and they contested those claims. "BREAKING: A reliable source has confirmed that none of you know sh*t," Reinhart captioned a pic of the cover, which she shared to Instagram (and has since deleted).

Sprouse shared a similar sentiment, cracking a joke about the matter. "UNPRECEDENTED: Cole Sprouse and Lili Reinhart consume the flesh of 'reliable sources' to fuel their bacchanalian sex cult," he said on Instagram.

Finally, Reinhart took to Twitter with a message about false reports in general. "Don’t believe everything you read on the internet, kids," she wrote. "And news sources should try a little harder to be less vile. 'Reliable sources' can kiss my ass."

Reinhart shared one of her most expressive and romantic posts about Sprouse to date in honor of his birthday in the form of a lengthy poem.

Days later, Sprousehart cracked a joke about the breakup rumors surrounding their relationship. After Variety posted a video of Sprouse on Instagram to promote their Power of Young Hollywood issue, Reinhart took to the comments section saying, "Sources say he's single now- is he available?"

Fans noticed in February 2020 that Reinhart hit the unfollow button on her beau, but she quickly clarified what really happened. "There was a glitch on Instagram everyone, don't freak out," she wrote, though fans weren't buying it.

In an Aug. 19 post shared to Instagram, Sprouse revealed he and Reinhart had gone their separate ways.

"Lili and I initially separated in January of this year, deciding to more permanently split in March," he explained. "What an incredible experience I had, I’ll always feel lucky and cherish that I had the chance to fall in love. I wish her nothing but the utmost love and happiness moving forward. All I’ll say about it, anything else you hear doesn’t matter."

Reinhart and Sprouse's social media exchanges have always kept fans guessing, and, chances are, that will never change.

More like this
Meghan Markle & Prince Harry's Beef With The British Tabloids, Explained
By Brandy Robidoux
This TikTok Theory About Eric From 'Boy Meets World' Will Blow Your Mind
By Rachel Varina
These Tweets About Regé-Jean Page Leaving 'Bridgerton' Are Royal Bummers
By Cianna Garrison
Stay up to date