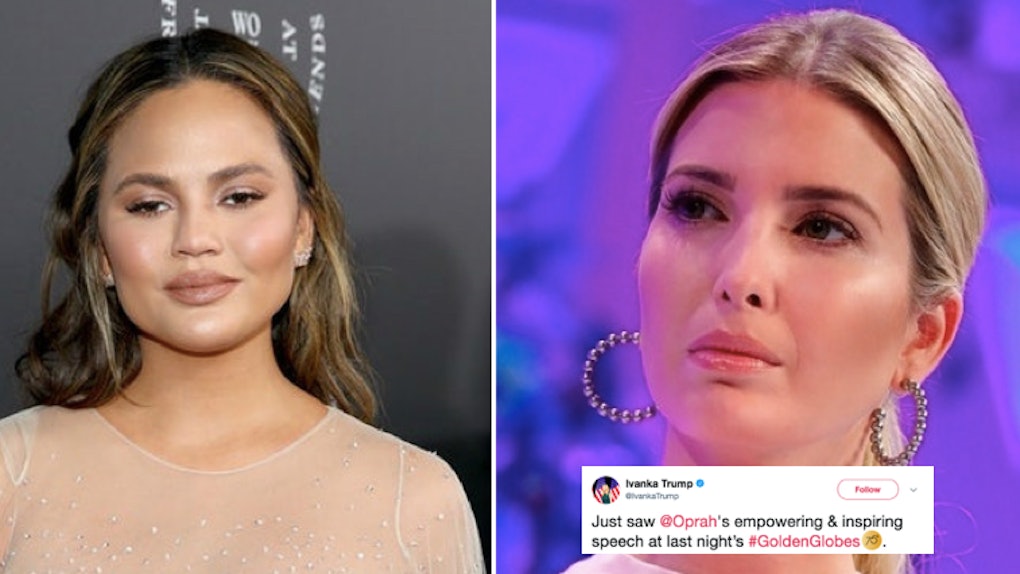 Time's Up has been the main topic of conversation since 2018 began, and we're just getting started. Basically every single attendee at the Golden Globes showed up wearing all black in support of the important cause. The most talked about moment from the entire night was the inspiring speech given by Oprah. The speech has already spread far and wide. Those who didn't watch the Golden Globes could still probably recite a line or two from it. Even Ivanka Trump took to Twitter to talk about Oprah, but her tweet was met with mixed reviews. Chrissy Teigen's response to Ivanka Trump's tweet about Time's Up is just so... Chrissy.

Let's start from the beginning. At the 75th Golden Globes on Jan. 7, Oprah was presented with The Cecil B. DeMille Award — an accolade that celebrates "outstanding contributions to the world of entertainment." Normally given to an actor or director, Oprah showed that she was the ultimate recipient when she gave her incredibly empowering speech. She stayed true to current events and embraced the #MeToo movement by telling stories about women who have combatted sexual abuse and harassment. She said during part of her speech (which still gives me goosebumps),

I want all the girls watching here and now to know that a new day is on the horizon! And when that new day finally dawns, it will be because of a lot of magnificent women, many of whom are right here in this room tonight, and some pretty phenomenal men, fighting hard to make sure that they become the leaders who take us to the time when nobody ever has to say 'Me, too' again.

Apparently, I was not the only one inspired by the speech, because Ivanka Trump decided she wanted to get into the mix. She tweeted on Jan. 8,

My first problem is that clearly she must think she's too good to watch the Golden Globes — think again, Ivanka. All jokes aside, people on Twitter did not greet Trump's tweet with applause. In fact, quite the opposite.

What made most people feel queasy about her tweet is that she's supporting Oprah's speech amid the sexual misconduct allegations surrounding her father, Donald Trump. According to the Huffington Post's running list of alleged victims who have accused Trump of sexual misconduct, the count is up to 21 women who have come forward. This includes accounts from Trump's ex-wife Ivana Trump, his former employees, and women who have participated in Miss USA. Donald Trump called these accusations "fake news" in a tweet on Dec. 12. The full tweet said,

Despite thousands of hours wasted and many millions of dollars spent, the Democrats have been unable to show any collusion with Russia - so now they are moving on to the false accusations and fabricated stories of women who I don’t know and/or have never met. FAKE NEWS!

Despite over 20 women coming forward with accusations, the White House's official stance is that all the stories are fabricated.

Chrissy Teigen is never afraid to speak her mind on Twitter and also saw the flaws in Ivanka's tweet. Teigen replied, "ew go away," to the first daughter. Concise and comical — that response couldn't have been any more Chrissy Teigen.

I wonder if Teigen keeps a catalogue of all her one-liners and looks back at them fondly. They should have a game show called "Teigen Tweets" where you have to choose actual tweets from Chrissy versus fake ones. Sorry, but I would win.

One thing is for sure – we can always look forward to a lot more Chrissy Teigen tweets.