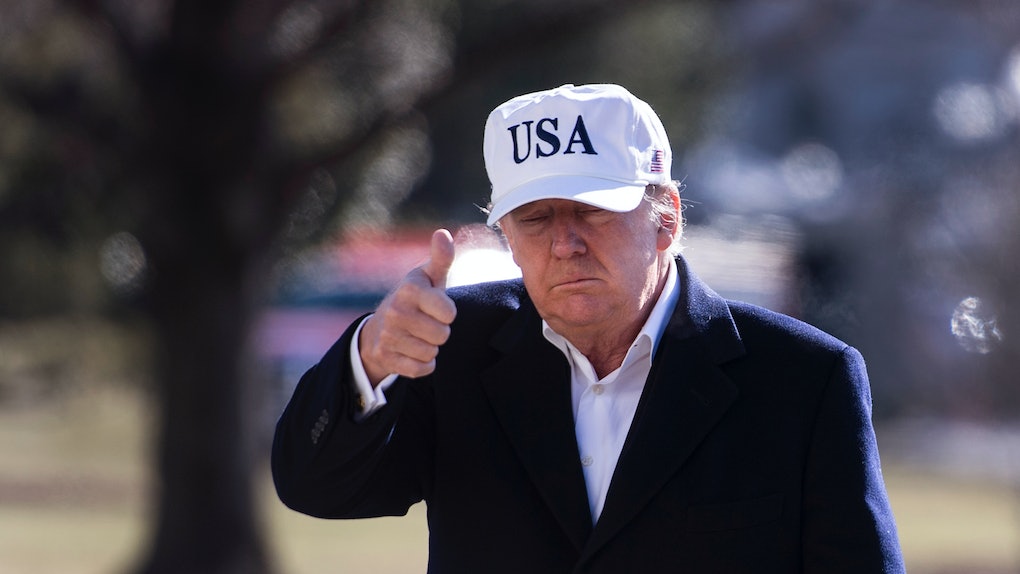 A tweet was sent by the president this weekend that we may as well call "Covfefe: Part 2." On Sunday, Jan. 7, Donald Trump tweeted "consensual presidency" on accident while trying to share a column commending his job in office. The mistake sparked immediate backlash on the social media site.

Trump shared a pair of tweets quoting a Jan. 6 New York Post opinion piece by Michael Goodwin in praise of the president. But in attempting to show some love for the positive press, Trump messed up.

"'His is turning out to be an enormously consensual presidency,'" wrote Trump, misquoting Goodwin over two tweets. "'So much so that ... there has never been a day that I wished Hillary Clinton were president. Not one. Indeed, as Trump's accomplishments accumulate, the mere thought of Clinton in the W.H., doubling down on Obama's...failed policies, washes away any doubt that America made the right decision.'" He went on quoting Goodwin, but even in such a short space (and in words not his own), there were more errors than one.

Twitter users began relentlessly calling out the mistakes. Trump apparently caught on and deleted the tweets, replacing them with a pair of corrected ones. "'His is turning out to be an enormously consequential presidency,'" the corrected version began.

Though he'd fixed the errors, Twitter users laid in on the fumble. "The most consensual presidency ever," commented Axios reporter Jonathan Swan.

"The Tale of the Very Stable Genius and His Enormously Consensual Presidency," tweeted Paul Fairie, referencing the tweet just a day earlier by Trump defending his mental fitness.

Many people were downright confused by what the president meant. The Palmer Report summed up some users' feelings aptly.

Beyond confusion, others took issue with the word "consensual" itself.

"He also coined the soon-to-be trending term 'consensual presidency,' on the night of the black dress, #TIMESUP #goldenglobes no less," tweeted MSNBC correspondent Joy Reid. That night, in fact, the 75th annual Golden Globes award show was happening, and several celebrities had donned pins that read "Time's up," a reference to the sexism, especially sexual harassment and abuse of power, that has racked Hollywood and beyond.

Some users referenced the allegations of sexual misconduct against the president. "Trump just tweeted out a quote that his presidency has been enormously consensual. Like Trump knows anything about consensual," wrote comedian Dana Goldberg. (The White House's official stance is that women making allegations against Trump are lying.)

As several users pointed out, it wasn't just the word mix-up that bungled the tweet: Trump also shared the reporter's email instead of the column link. (Poor Michael Goodwin, whose inbox is probably in shambles by now.)

"Donald Trump just tweeted some guy’s email address, trying to promote a sycophantic column about himself," wrote Reid. "Maybe whoever brings him his night burger could explain URLs?"

And the delay on correcting his tweets was, well, significant.

With how fast things move on the internet, it's only worse, if anything, on Twitter. As one user pointed out with screenshots of the tweets' time stamps, it took Trump nearly an hour to delete the error-ridden tweets and replace them with new ones. (That's like a whole day in Twitter Time.)

Trump cut out part of Goodwin's quote — the criticism part.

Here's how Goodwin's actual writing goes: "So much so that, despite my own frustration over his missteps, there has never been a day when I wished Hillary Clinton were president. Not one." Guess which part of that didn't make it into the tweets Trump shared? Yup. The whole "missteps" part. (Trump's corrected versions did include the quote verbatim, missteps and all.)

In fact, the piece as a whole was anything but puffery, and was perhaps even unflattering, as one user points out. "This is the essential nature of the Trump presidency, where catastrophe is always a heartbeat away," writes Goodwin. "It will be like that as long as he’s in the Oval Office." Though he commended some of the wins of the administration in its first year, Goodwin made note of the presidency's "chaos" and Trump's "penchant for melodrama." Not exactly the quote you'd want written about you in the high school yearbook.

In the end, Goodwin will be happy to know, the corrected tweet did not include an email address, but rather the link to the article as intended.