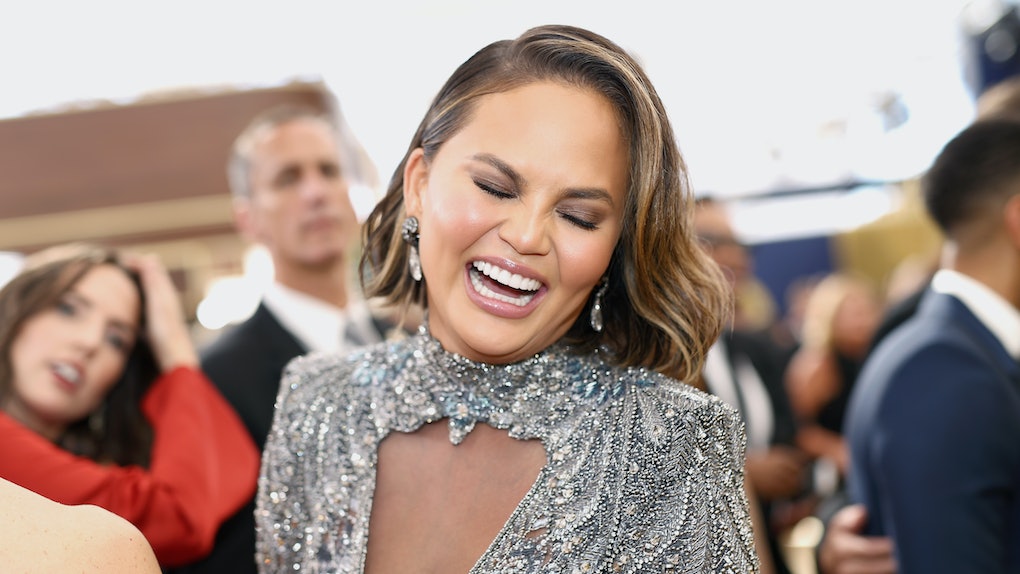 Every time I see Chrissy Teigen post on social media or give an interview, I wonder, "Is there anything that woman can't do?" She's been so inspirational to me, personally, by being a woman who's unafraid to speak her mind, make fun of herself, or get super real — even with people she doesn't know IRL. Although she has 21.3 million followers on Instagram, she has to be one of the most down-to-earth celebrities I've ever followed. Case in point: Chrissy Teigen's comments about stretch marks are just the latest example of her advocacy for showing, and appreciating, women's bodies exactly as they are.

In a recent interview with Elle UK, Teigen got real about how ridiculous it is that stretch marks are still considered taboo, let alone so taboo that they're constantly edited out of professionally taken photos in magazines. "Everyone Photoshops them out," she told Elle UK. "It’s insane. And I don’t want anyone to feel like they’re the only ones."

It is pretty wild if you really take a second to think about it. After all, stretch marks are as natural as a belly button or body hair. In fact, according to CBS News, 80 percent of Americans have stretch marks, so, statistically speaking, you're definitely more likely to have them than not.

Plus, the more you see retouched photos and social media posts, the more likely it is that your general view of people's bodies may be distorted, according to Teigen. "People get FOMO, or they feel bad about their bodies, and I get it. If I feel bad seeing certain things, what about that girl who has no connection to this industry?" she told Elle UK. "It makes me sad, because that’s not really how it is."

Teigen emphasized the notion that stretch marks definitely do not discriminate in terms of who can experience them, as she noted in her Elle UK interview that some of her past co-workers in the modeling industry also had them — because, you know, they're completely freaking normal. "I was on a Victoria’s Secret shoot and it was a big turning point for me to see those women with scars and stretch marks and bruises," Teigen told the outlet. "Who’s to say it’s even a flaw?"

Obviously a physical feature isn't just considered "OK" or "acceptable" sheerly because models have it, too, but there's something to be said about normalizing something that is so often seen as a "flaw."

I'll be honest: When I was growing up, I genuinely believed that stretch marks only appeared on pregnant women's stomachs, which I imagine had to have something to do with the fact that you simply don't really see these physical features on models, actresses, or in any other mainstream depictions of women's bodies. Fast-forward to about a decade later, and surprise! Pretty much every single person I know — myself included — has some form of stretch marks.

From Teigen's perspective, things are starting to shift, slowly but surely, when it comes to showing a broader range of women's bodies, particularly in the fashion industry. "Fashion is definitely kinder to women now," she told Elle UK. "Some brands cater to a lot of different body types, so it’s obvious now who supports women and who doesn’t." Aerie's #AerieREAL campaign, for example, has taken a stance against all retouching of models' photos, and the brand has committed itself to prioritizing body positivity in its overall work.

For Teigen, this shift has been largely sparked by women who have had enough of these unrealistic body standards. "I’ve never seen women have more fight in them than now," she told Elle UK. "We’re ready to stir the pot and bring issues to light." (Can I get an amen?)

Teigen has been open about her own struggles with body confidence for a while, and she's not afraid to admit that, while she's generally pretty open about sharing things like her stretch marks, she doesn't feel totally confident all the time, because really, who does? Back in July, she tweeted,

Instagram is crazy. I think it’s awesome people have killer bodies and are proud to show them off (I really do!!) but I know how hard it can be to forget what (for lack of a better word) regular ol’ bodies look like when everyone looks bonkers amazing.

In another tweet on the same day, Teigen emphasized that she wouldn't exactly call herself "body confident" quite yet. "I’m still super insecure," she tweeted. "I’m just happy that I can make anyone else out there feel better about themselves!"