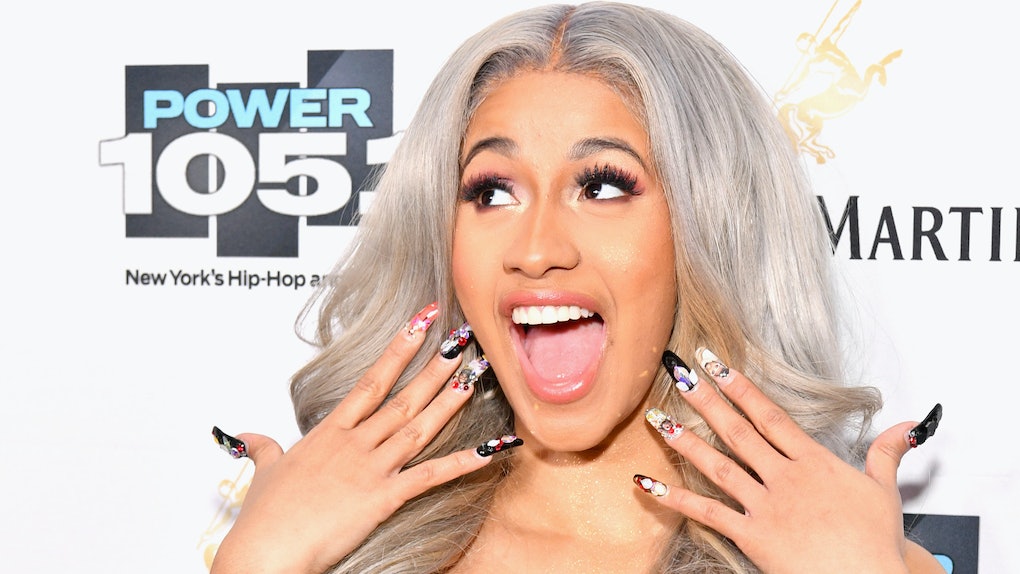 After taking a break from social media last week, Cardi B came back to Instagram on May 20 in order to tease the release of the video for her single, "Be Careful," which she just dropped on Monday, May 21. Not to be all spoilery and all, but OMG you guys, the video features a seriously intense desert wedding scene that looks a lot like a long lost episode of Breaking Bad, because the whole thing suddenly turns into a funeral. That's right — Cardi B's "Be Careful" music video features both a wedding and a funeral, and I am totally shook!

The video starts off with Cardi rolling up to an old, dilapidated chapel in the middle of a desert. We assume she's there to get hitched to some guy who is not, it turns out, her real-life fiancé Offset. He kinda looks like Will Smith in the movie Wild, Wild West, but, like, way hotter. Inside the chapel, we get Cardi the bride in a big white wedding dress, singing about how she wants to get married so she can be like Steph and Ayesha Curry. I feel that, girl! But outside the chapel, we simultaneously see Cardi exit her convertible dressed in all black and a pair of studded stilettos. She's wielding a crucifix as she approaches the chapel's doors, only this time when she opens them, things have taken a dark turn and she finds herself at a funeral and — plot twist! — it's for her groom!

So much for happily ever after, right? Still, the video is all kinds of awesome, and I legit can't stop watching it. Fave moment: Right before Cardi enters the chapel, when the dude basically floats backward out the double doors and disappears. Boy, bye!

The night before she dropped the video, Cardi took home the Billboard Music Award for Top Female Rap Artist, and she also reactivated her Instagram account with a post that featured a clip from the "Be Careful" music video. Later that night, she added another video, this one of herself walking the streets and chatting to the camera with a head of bright red hair.

"Tomorrow my music video for 'Be Careful' is gonna be out," she explained in the post. "I hope y'all enjoy it. It was one of the hardest videos I ever did because it was in the desert, like the middle of nowhere, and b*tch I was so hot. I never sweat and I was sweating that day."

Rumors have been circulating since January 2018 that Offset cheated on Cardi. Elite Daily reached out to Cardi B and Offset's teams for confirmation of these reports, but did not hear back by the time of publication. So now I have to wonder if Cardi dreamed up this dark and twisty video — which was directed by Jora Frantzis — as a message to the Migos rapper. The whole wedding-into-a-funeral vibe definitely seems like a major warning to any guy who dares to stray. And check out the song's chorus:

Not a threat, just a warnin'. And one a dude should probably heed if he doesn't want to end up in a casket at his own wedding, okurrr?