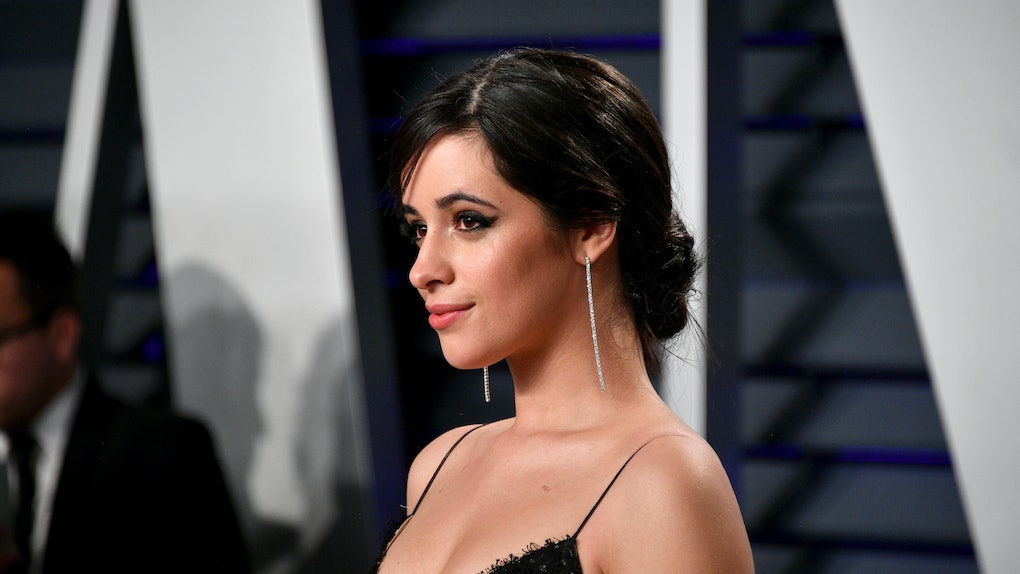 Hi, hello, if you're not here to talk about Camila Cabello's new platinum blonde hair, then I'm sorry, but I don't want to talk. The always-raven-haired singer just posted a new music video for song "Find You Again," and in it, she has the white-blonde strands of Marilyn Monroe, old-school Lady Gaga, or a Kardashian in a great wig. It's definitely a new look for Cabello, and I have to say, I'm a fan.

Lately, all anyone wants to talk about is the "are they, aren't they?" dating rumors swirling around Shawn Mendes and Camilla Cabello. Their chemistry in the "Señorita" music video was hot and heavy to say the least, and even though I kinda sorta maybe think they might be together, I can't sit around and wonder about a relationship I know nothing about, especially when there are concrete hair changes being posted to Instagram to discuss. Get your priorities in order, people! I'm far more concerned with Cabello's new 'do than with her might-be boyfriend. Maybe that's just me, though.

Ever since Cabello first hit the scene with girl group Fifth Harmony, she's always had recognizably long, dark strands. It's kinda been her "thing":

That, and her ability to rock a straight-across bang, the likes of which I haven't seen since the original Bang Princess Zooey Deschanel:

Whether she goes a little longer, a little shorter, or opts for bangs to spice it up, one thing remains the same: Cabello's hair is always a deep brown-black.

That is, it was, until she posted this music video teaser:

TBH, few things thrill me more than a nicely-rooted platinum blonde. So grungy-cool! "what should her name be?" Cabello wrote in the caption, clearly feeling unlike herself thanks to the lighter strands. My favorite suggestion? "I can’t decide between Camila Montana or Hannah Cabello," one commentor wrote. LOLing.

The full video is out now, and Cabello is seriously slaying. Talk about blonde ambition!

Cabello's hairstylist Dimitri Giannetos, posted the blonde moment to his Instagram feed, but didn't confirm whether it was a dye job or the magic of a great wig. Because platinum would be so damaging to Camilla's strands, I'm willing to bet it was a wig.

A day after posting blonde Cabello, Giannetos posted her again, this time with her usual dark strands freshly chopped, so yeah. I'm thinking it was a wig:

Remember that time Mindy Kaling posted in a blonde wig for April Fool's Day as a joke, but everyone seriously loved it? Like, so much so that she went to the Met Gala as a blonde, too? I'm feeling a similar situation about to happen here. Maybe Cabello will vibe with everyone's positive feedback and decide to go blonde for real! Personally, I think she should go for it. She's entering a new era of her career, so why not a new 'do to symbolize the change and growth? I'll love you and your dancey AF songs either way, Camilla, but if you want my opinion, I say go blonde for real next time!