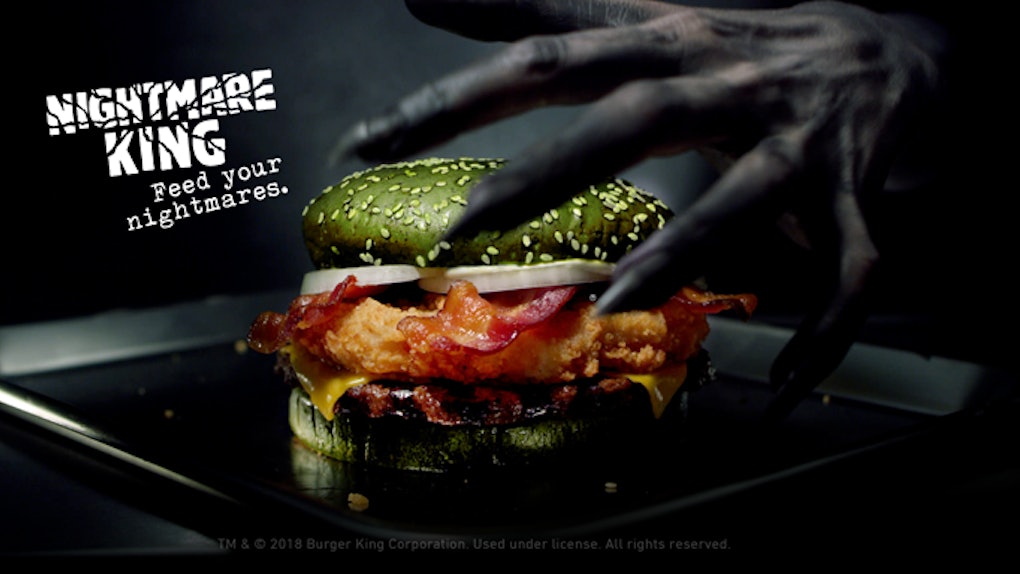 Usually, Halloween snacks have an orange hue and taste like a PSL (or candy corn, depending on what you're into). However, Burger King took a spooky turn with its Halloween menu this year — because the company is releasing a burger that will totally creep you out. It's not orange, and it certainly doesn't take like a pumpkin. Instead, Burger King's Nightmare King Halloween burger boasts savory flavors and a green sesame bun. That's right: The bun on this delicacy is green, and it'll give you goosebumps with each and every delicious bite.

Burger King announced its upcoming Nightmare Burger on Wednesday, Oct. 17, but it won't be available until Monday, Oct. 22. That gives you just enough time to plan out your meals leading up to the big day (Halloween, duh). Hopefully, you're able to snack on Burger King's Nightmare Burger more than once leading up to Oct. 31, because it won't be around forever. In fact, the Nightmare Burger will only be sold until Nov. 1, which means it'll "ghost" the Burger King menu shortly after Halloween is over. It'd be a total bummer to miss out on such a spooky delicacy, so get it while you can.

Plus, you'll totally want to post a photo of its ghoulish green bun to Instagram before you take a bite.

I told you it was creepy! Yet, I'm still getting hungry just looking at it.

As you can see, there's much more to the Nightmare Burger than its green glazed sesame bun. According to Burger King, the Halloween delicacy features a 100-percent white meat crispy chicken fillet, a quarter-pound of savory flame-grilled beef, American cheese, mayonnaise, thick cut bacon, and onions. I'd totally eat one of these for dinner on Halloween night (after devouring bags of candy, of course).

If you feel the same way, you can rest assured that this burger won't break the bank. According to Burger King, the Nightmare King will sell at a recommended price of $6.39. Its cheap cost might help you budget other spooky snacks into your diet, like Pumpkin Spice Lattes and Halloween doughnuts from Krispy Kreme. Why not go all out? It's Halloween season, after all.

If you opt for the Nightmare King when it becomes available on Oct. 22, you can even order it from the comfort of your own couch. According to Burger King, Postmates will offer the snack until Nov. 1 with free delivery. In other words, you won't have to stop your scary movie marathon when you're craving a Nightmare Burger. Instead, you can have it delivered straight to your door.

I'm sure you'll want to order a festive drink to go along with your Nightmare Burger, and Burger King has you covered. The food chain is currently offering a Frozen Fanta Scary Black Cherry drink, and it'll literally send chills down your spine. The black slushy — which reportedly costs $1, per Chewboom.com — will be available until Nov. 12. So, you can happily sip on the creepy beverage for a few weeks after Halloween.

Still, I'm sure it'll taste great with your Nightmare Burger. Can you imagine eating a green sandwich with a midnight black slushy on the side? Talk about spooky.