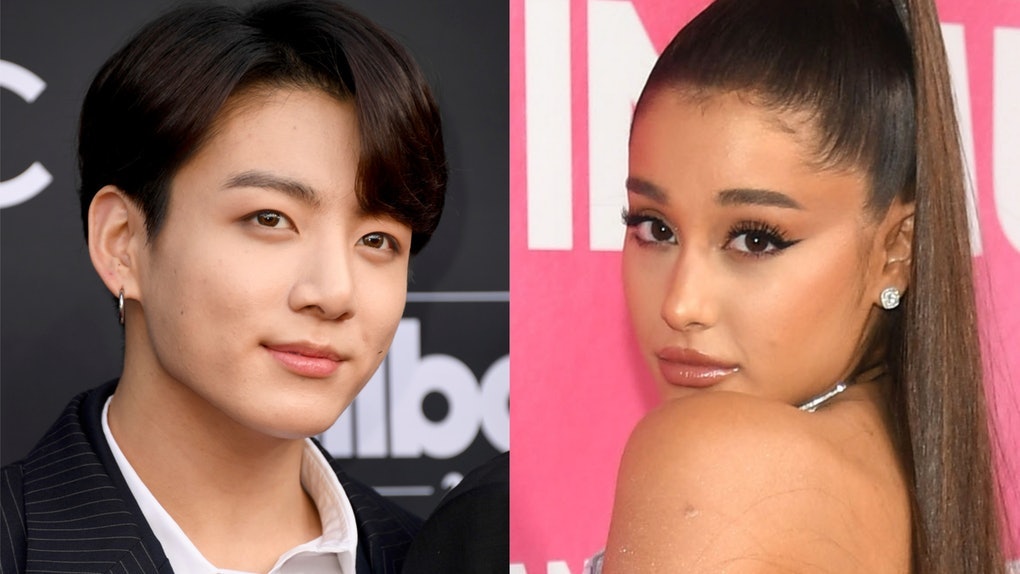 Remember back at the beginning of May when ARMYs lost their collective mind after Jungkook finally got to meet Ariana Grande? No? Well, then lemme get you up to speed. See, BTS had a rare day off from their sold-out Speak Yourself tour, so Jungkook decided to roll up to Ari's Sweetener show at the Staples Center in Los Angeles with her manager Scooter Braun. After the concert, JK hit up Twitter with an appreciation post for the "7 Rings" singer, saying that seeing her perform live made him want to 'work harder.' My heart! And wait — there's more! Because we now have BTS' Jungkook's story about meeting Ariana Grande, and what Kookie took away from the experience is actually pretty profound, you guys.

OK, so... in a recent interview with the Japanese magazine Anan, Jungkook revealed exactly how much seeing Grande in action increased his own passion for performing and inspired him to keep on learning.

"The more I watch other artists’ performances, the more I want to do on stage," Jungkook explained to the publication, according to a fan translation of Jungkook's interview by @K00kceptional. "It’s an honor to be able to enjoy while receiving inspiration and stimulation."

"Before her concert, I told Ariana 'There’s a lot of things I want to learn from watching your concert'," Jungkook continued. "We also gather before our performances [to] start and pull ourselves together, and she was doing the same thing. She called on to me to say 'Let’s do it together,' and she let me into her circle."

And here's Ariana's photo with JK:

Aw, they stan each other so hard!

"I had a lot to think about after the concert," he told Anan. "I searched up 'foreign vocals' and 'how to do vocal exercises,' and practiced in my hotel room. My throat actually still hurts a bit."

Wait. He googled vocal exercises and then practiced them in his hotel room until his throat hurt? That's amazing. He's just got so much passion and is so eager to learn.

JK also revealed in the interview what he takes away from meeting other artists, as well.

"When I meet them, they interact with me in a lighthearted mood as if we’re friends, rather than talking seriously about music," he explained. "When you listen to their songs after acknowledging what their personalities are actually like, you can sometimes understand their world views more. Words are important, but as for music, you also 'learn by feeling' a lot too."

Jungkook is so wise and insightful, that it's hard to remember that he's only 21 years old. He really is so wise beyond his years.

Check out what he had to say about learning to speak English.

I’m not even up to a middle schooler’s level yet. Even in concerts abroad, the fans sing along to our songs in Korean. I’m truly grateful for that. It made me want to keep on studying languages without giving up, to be able to express my thoughts in my own words.

Don't worry, Jungkook! Your effort is noticed and appreciated. Like, did y'all hear Jungkook rocking the English language at the Grammys? Because I'm still shook. And that time he said "Easy, peasy, lemon, squeezey" in London? Middle-school level, JK? I THINK NOT.

As for what the future holds, Jungkook said he wants to keep on doing concerts as BTS. "I feel the happiest in those moments," he explained. "I hope the fans feel the same way!"

More like this
These Tweets About Ariana Grande Joining 'The Voice' As A Coach Are All Over The Place
By Michele Mendez
BTS' Statement Condemning Asian Hate Gets Real About Their Experience With Racism
By Michele Mendez
When Are Ariana Grande & Dalton Gomez Getting Married? Here's The Reported Tea
By Corinne Sullivan
Stay up to date