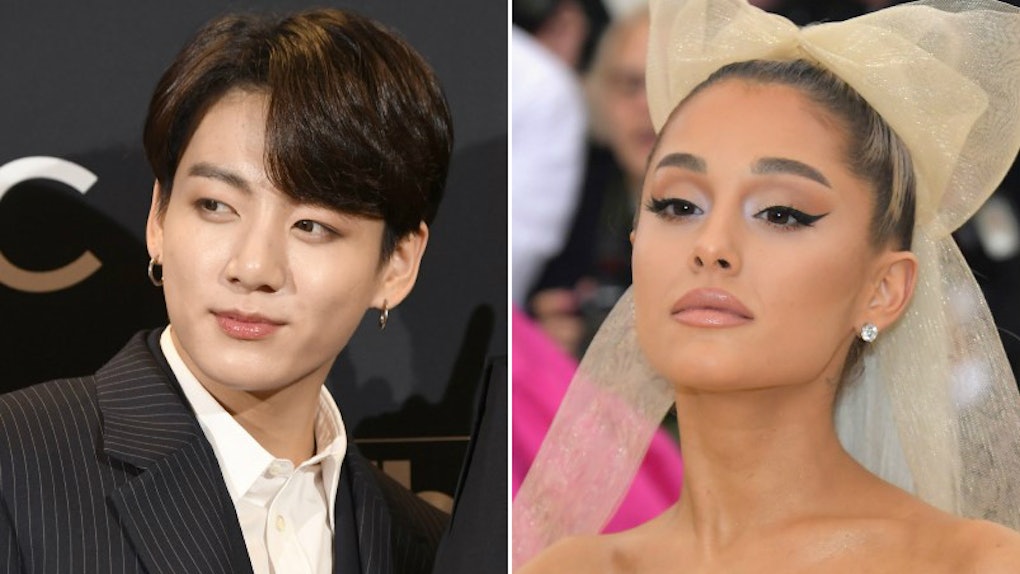 BTS fans everywhere know that Jungkook is one of Ariana Grande’s biggest fans. He’s been stanning her for years and he just got the chance to see her live on stage. But that’s not all. He also got to meet her! The photo of BTS’ Jungkook and Ariana Grande meeting will make you so happy.

Jungkook attended Grande's May 6 concert at the Staples Center in Los Angeles. After the concert, Jungkook shared some of his thoughts about seeing Grande live with fans on Twitter.

"I felt and learned a lot after seeing her stage. I am really challenged by her stage and will try harder! #ArianaGrande," Jungkook wrote.

I guess that means that Grande's stage presence truly inspired him, even though he's a superstar in his own right. That's a great mindset to have, actually. It's never too late to learn from your contemporaries and improve your own approach to your profession. It seems that Jungkook feels that way about Grande, which is sweet.

After the show, Jungkook was lucky enough to snag a few minutes of Grande's time and snap a very cool photo with her. But Jungkook wasn't the only one freaking out about meeting one of his idols. Grande shared a photo on her Instagram account of them together that proves she was fangirling over this whole meet-and-greet herself. "Screaming. 🖤," she captioned the pic. "thank u soooooo much for coming to my show, Jungkook. it meant so much. love u sm 🌬."

Too cute! Here's a look at their awesome photo:

You can see Jungkook's tweet about attending Grande's concert down below:

It's obvious that these two incredible artists have a lot of love and respect for each other. Naturally, fans are eating it right up and even urging the two performers to do a collaboration. Fans are even theorizing that Grande and Jungkook talked about a possible collab while they were backstage during Grande's Sweetener concert.

Since Grande is super busy with her tour and BTS has literally just embarked on theirs, it's doubtful that a collaboration will happen right away. I'm sure there's a possibility for it in the future, though! For now, fans will just have to relish the fact that Grande and Jungkook finally met and they seem to really like each other.

Actually, Grande likes Jungkook so much that she changed the screensaver on her phone to the photo of them together. Here's what it looks like:

As you probably know by now, BTS recently collaborated with Halsey on "Boy With Luv" after sparking a really sweet friendship with her. So maybe Grande and Jungkook's new friendship means there'll be a BTS x Ariana Grande track once everyone is done touring. It actually would be an amazing collaboration, if you really think about it. I mean, with Grande's incredible vocals and BTS' multitude of talents, there's a lot they can do together!

I guess everyone will just have to wait and see what happens, though. In the meantime, let's all just appreciate how sweet Jungkook and Grande look in the photo they took backstage. It's a perfect photo, if you ask me. Too cute!