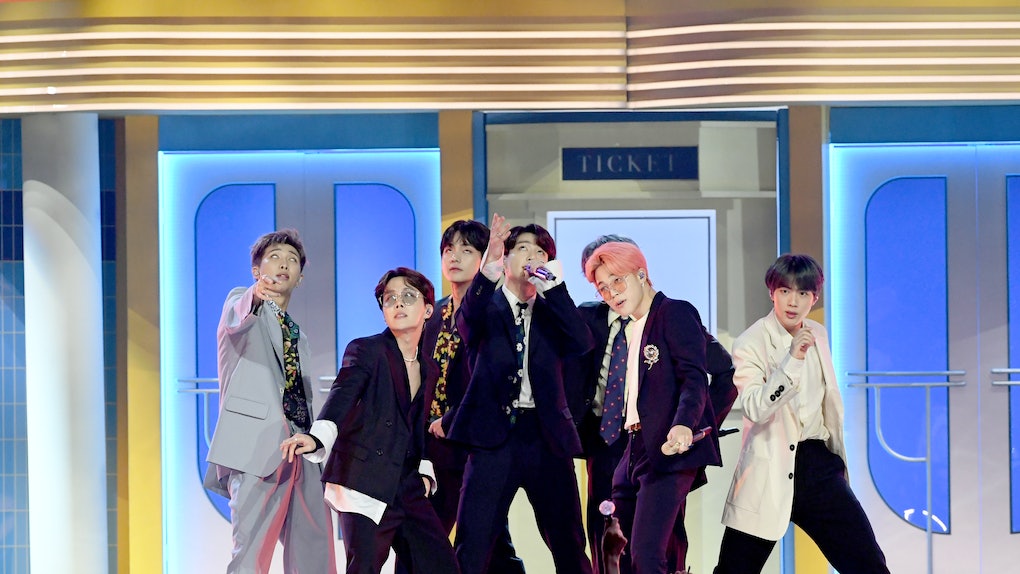 Everyone's favorite K-Pop boys in BTS hit London on Saturday, June 1, as part of the Love Yourself: Speak Yourself world tour. RM, Jin, Suga, J-Hope, Jimin, V, and Jungkook performed a sold-out show at Wembley Stadium. As expected, they absolutely brought down the house. Whether you were lucky enough to attend this historic Wembley Stadium concert or watched a livestream at home, everyone can agree that the show had some incredible highlights, and the boys had some seriously swoon-worthy moments throughout the night. Here are the seven best moment from BTS' Wembley concert that will make you want to relive the show over and over again.

BTS' latest album, Map of the Soul: Persona, was No. 1 one on UK charts after it was released in April 2019, making Wembley the perfect venue for the K-Pop group. In many ways, BTS' performance at Wembley was pretty historic. Not only was BTS the first Korean group to play at the stadium, but the group was among the few artists who actually sold out the stadium, which is a pretty big deal considering Wembley holds 90,000 people. If anyone can sell out a stadium, though, it would be the BTS ARMY.

The show wasn't only noteworthy because of BTS' impressive stats, but also because of some incredible moments that took place throughout the night. Here are six awesome moments from BTS' June 1 Wembley Stadium show.

Jungkook took the reins of this accent lesson, saying he "learnt" the English accent. And he when on to say, with an almost perfect English delivery, "Easy peasy, lemon squeezy." RM got in on the action, saying his English tongue twisters were, "Lovely." Before concluding the best English accent lesson ever, Jimin chimed in, saying, "You can do better!" The boys were all smiles while attempting the accent, and by the cheers from ARMY, I'm sure the people in the crowd were grinning from ear to ear as well.

2. RM Was Getting Emotional, So Jimin Squished His Face To Cheer Him Up

In one of the most adorable moments of the show, Jimin stepped up to the plate to show his support for RM, not only as a fellow band member but also as a friend. At one point, RM was getting emotional and almost started tearing up, so Jimin lent his hand to squish RM's face and offer some support. RM cracked a smile during the squish sesh, so presumably all went well.

During a BTS concert in London in October 2018, Jungkook suffered a major leg injury and had to perform seated. But, at the June 1 Wembley concert, the K-Pop star was back on his feet, just in time for the historic show. He first apologized to the crowd and said he felt guilty about what happened in London last year, but he then shared, "I'm now happy as I could finally show you real myself." Then, he thanked ARMY and told them they "made [his] day." Aww, the BTS love for ARMY is so real, you guys!

4. Jimin's Bubble Didn't Pop During His Performance Of "Serendipity," But He Handled It Like A Pro

During Jimin's solo in "Serendipity," he was sitting and singing inside of a giant bubble that was clearly meant to be popped. When he tried to pop it, though, the material didn't do exactly what it was supposed to and stayed completely intact. Any regular person might have panicked during that moment, but not Jimin, who just kept performing calmly until the bubble eventually deflated, and he emerged cool as a cucumber.

5. Jin Did An Absolutely Adorable Freddie Mercury Call And Response Bit With The Crowd

During the show, Jin shared that he recently watched Bohemian Rhapsody. To honor the film and Queen's legacy, he wanted to perform the same kind of back-and-forth vocals with the crowd that Freddie Mercury did at Queen's historic Live Aid performance in 1985. TBH, Jin did a killer job, and the crowd definitely loved it.

In a super endearing moment at the end of the show, Jimin opened up about his excitement about performing at Wembley and his deep love for Army. He said,

He thanked everyone at Wembley for coming and said that the day meant a lot to him. It goes without saying that the crowd went absolutely wild as he shouted ARMY multiple times.

7. Actually, Everyone Gave The Most Heartwarming Speeches

During their ending remarks to the packed stadium, the boys expressed their gratitude for ARMY, talked about how happy they were to be able to show the world their true selves, and shared their excitement about getting to perform at Wembley. Saying things like, "This moment and feeling will forever be in our hearts." Each speech was heartfelt and personal in its own way and undoubtedly left everyone in the stadium feeling warm and fuzzy. They even lit up the stadium with some ARMY BOMB action as they interacted with the crowd. It seemed like everyone involved had the time of their lives.

Though these are just some of the highlights from BTS' historic Wembley Stadium show, it goes without saying that performance was filled with highlights that impacted different people in different ways. Here's to many more adorable, heartwarming, and powerful BTS moments.

More like this
BTS' Jimin & Jin's Videos Singing In A Car Are A Surprise A Cappella Concert
By Abby Monteil
Here's How To Stream BTS' 2021 'Bang Bang Con' So You Don't Miss The Concert
By Cianna Garrison
Is Olivia Rodrigo's "Deja Vu" About Joshua Bassett & Sabrina Carpenter Again? Let's Investigate
By Brandy Robidoux and Michele Mendez
Stay up to date