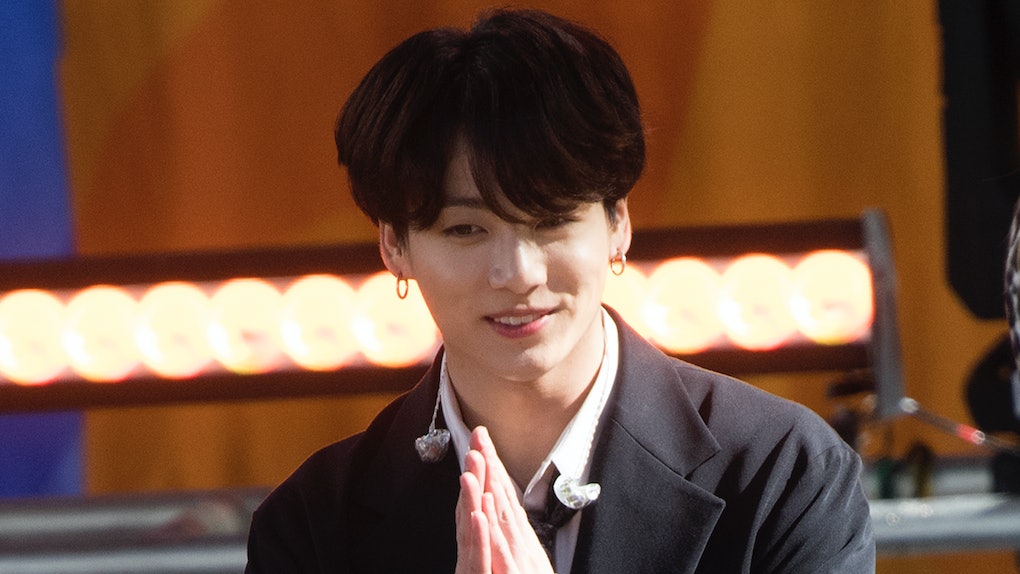 With three consecutive Billboard No. 1 albums, two Top 10 singles, and countless trophies under their belt, BTS is on top of the world. It's nearly impossible to not see these guys plastered all over social media, television, and magazines, as the guys keep breaking barriers in the music industry with every album they drop. While RM, Jin, Suga, J-Hope, Jimin, Jungkook, and V appear to be all smiles most of the time, every once in a while, they open up about the insecurities and challenges that come with international stardom. In a new interview, BTS' Jungkook talked about the challenges of fame, and what he said is so telling.

On Nov. 19, Paper unveiled its 2019 "Break the Internet" issue with BTS as the cover stars. Dressed in pastel colors reminiscent of their "Boy With Luv" era, the members are pose it up alongside Lisa Frank-inspired artwork. The cover looks like something straight-up out of the '90s, and fans were filled with nostalgia at the sight of it.

The cover exudes nothing but happiness and positivity, and, for the most part, the group's interview with Paper is pretty lighthearted, too. However, the guys got real about the many pressures super-stardom brings, especially Jungkook.

When asked about the greatest challenge they face as a group, most members said it's when their unique personalities and opinions clash, but Jungkook offered a different answer. He said along with fame comes the reality that his words and actions are being intensely scrutinized by everyone — fans, antis, and the press alike.

"When something I said or did caused an issue or made people feel disappointed," Jungkook answered.

The youngest BTS member may have been alluding to the sensationalized stories surrounding his personal life that became fodder in the international press in recent months, from senseless dating rumors to reports about a recent fender bender.

From all this, Jungkook has seemingly learned a heartbreaking lesson. "I realized that I should think twice before I do anything, and not forget where I am, no matter what situation I may be in," Jungkook explained.

Jungkook says he's always striving to improve. "The pressure [of being perfect] is always there. But I want to show them that I am improving," Jungkook said. "If I had a chance to improve every aspect of myself, then I would work hard to make it happen rather than just sitting idly by."

Although fans are prepared to defend Jungkook from the unfair criticism and unrealistic expectations that come with his top-K-Pop-idol status, Jungkook's response to the challenges of fame is a thoughtful reminder he's dealing with them in his own way. It only makes the BTS ARMY appreciate all his work with BTS that much more.