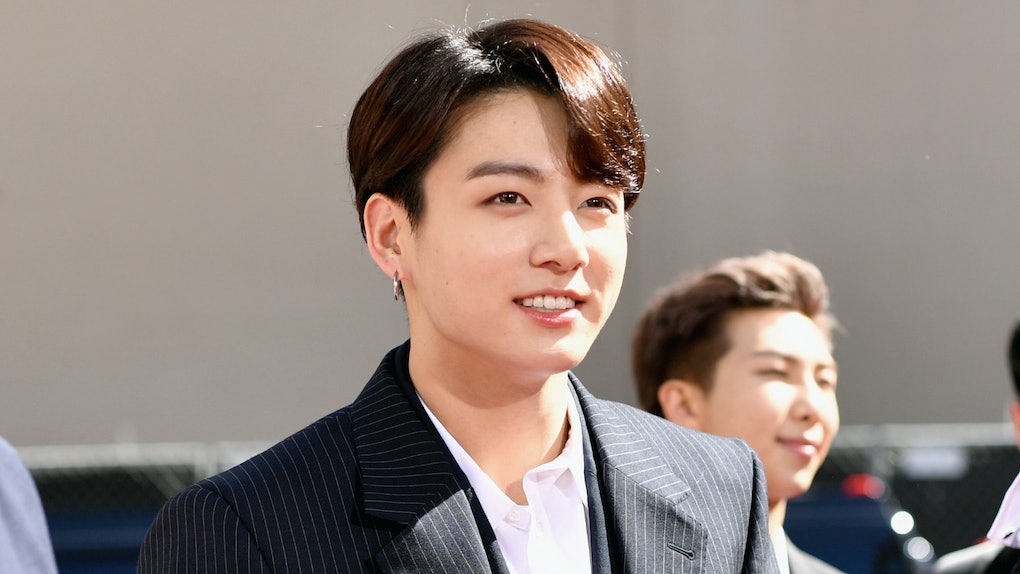 Does BTS' Jungook Have A Girlfriend? Big Hit Is Shutting Down The Rumors

BTS' work ethic is on a whole other level. This year, along with a big album release, BTS toured the world on their first stadium tour. Having back-to-back concerts on top of doing album promotions would be a lot for any artist, and maybe that's why on Aug. 11, Big Hit Entertainment announced that BTS was going on an "extended period of rest and relaxation" in order to "recharge" themselves. In that same statement, Big Hit asked fans to respect the members' privacy while they were on vacation. Unfortunately, some people did not follow that request, because Jungkook was snapped out to lunch with a female friend and then again at another location. The photos were circulated on social media, causing everyone to speculate that they were dating and ask, "Does BTS' Jungkook have a girlfriend?" Well, Big Hit's response to BTS' rumors Jungkook is dating shows that people shouldn't jump to conclusions. And better yet: They should respect BTS' privacy.

The rumors, and what they were based on, were disappointing for a lot of fans because Big Hit literally asked people to respect the members' privacy during their extended break. The statement read, "Should you have a chance encounter with a member of BTS while they are on vacation, we ask that you show them consideration for their need to rest and enjoy their private time off."

The whole point of BTS' vacation was so RM, Jin, Suga, J-Hope, Jimin, V, and Jungkook could "enjoy the ordinary lives of young people in their 20s," which means hanging out with friends and family without being bothered.

Sadly, not everyone followed Big Hit's wishes, causing the company to release a statement clearing up the rumors surrounding Jungkook and his friend. According to a report by Soompi, Big Hit released a statement firmly denying the rumors that Jungkook is dating the woman he was photographed with.

Big Hit Entertainment clearly states that the claims about our artist Jungkook that are being spread on social media and online communities are not true. While in Geoje Island during his period of rest, he found out that his acquaintances from a tattoo shop were also visiting the area. He then met with his tattoo shop acquaintances and other acquaintances from Geoje Island for a meal and had a karaoke session. This is the truth that has been distorted. We think it is unfortunate that [Jungkook’s] personal daily life during his period of rest became known in a distorted way.

So there you have it. Jungkook was just hanging out with friends.

What's particularly disturbing about this incident is that one photo circulating online appeared to be obtained from security footage. Big Hit went on to address this invasion of privacy and made it clear they would be investigating the origin of the photo and take legal action if necessary.

Ugh, Big Hit shouldn't need to release a statement because whether the rumor was true or not really isn't anyone's business. Having relationships with other people is normal. Even if Jungkook was dating the woman he was pictured with — that, too, is normal and something he does not owe anyone an explanation for. But, with the knowledge that they are not dating in mind, newsflash: having friends of the opposite gender and hanging out with them in public is also normal and doesn't automatically mean they're dating. The idea that Jungkook has to be wary of hanging out with friends that are women because he'll constantly have to shut down rumors they're dating is really sad.

It's times like these when people need to remember that all the BTS members are humans who deserve respect as much as anyone else.