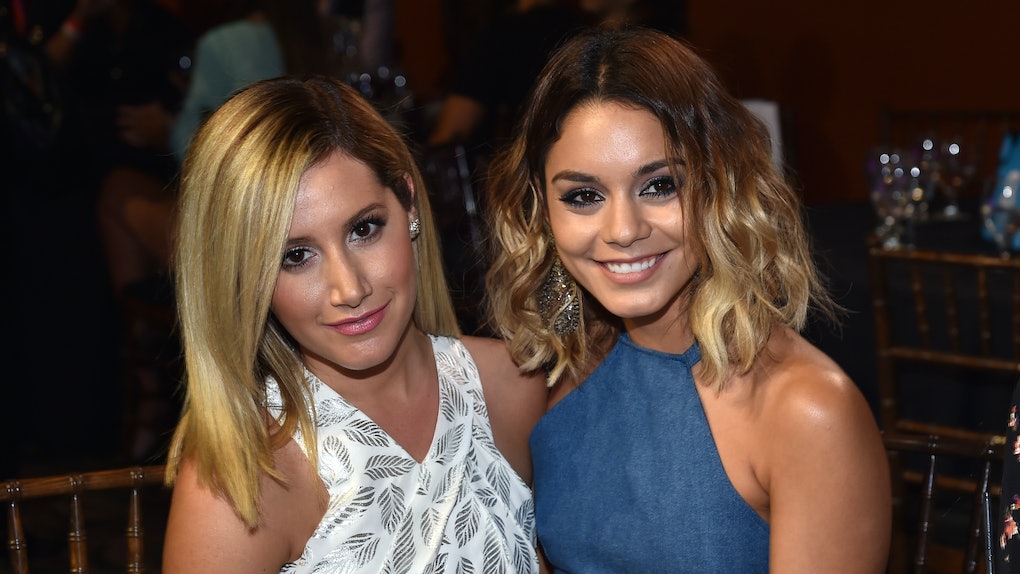 I don’t know about you, but I live for those magical moments when two co-stars from my favorite flicks prove their actually friends IRL. And I’m pretty sure High School Musical fans will be able to relate — because recently, Ashley Tisdale and Vanessa Hudgens were Kim Hidalgo’s bridesmaids together. What Wildcats rivalry? These two are clearly two peas in a pod.

Here’s the full lowdown. Former Pretty Little Liars star Brant Daugherty, who met actress Kim Hidalgo on a dating app, proposed in Amsterdam on Valentine’s Day 2018 with a custom-designed rock. Tisdale and Hudgens have been besties ever since their High School Musical days circa 2006, but this is not the first time the Disney co-stars have been in a wedding together. Hudgens and Hidalgo were both bridesmaids when Tisdale said “I do” to composer Christopher French in 2014.

Hidalgo, who is known for her roles on the TV shows Bones and Grey's Anatomy, as well as the movie To Save a Life, looked stunning while sporting two bridal gowns designed by Pronovias. But her six bridesmaids were equally breathtaking in coordinating vintage-inspired beaded lavender gowns by Adrianna Papell. In addition to Tisdale and Hudgens, Hidalgo also had Shelley Buckner, Laura Jayne, Samantha Droke and Natalie Saidi by her side to round out the bridal party. Can you say squad #goals?

Unsurprisingly, the ladies eagerly posted a slew of photos and videos from the big day on social media, and it’s pretty obvious that they had a blast celebrating their BFF’s nuptials. Right before the ceremony kicked off, Tisdale uploaded a Boomerang video on IG of the bridesmaids lined up in all their jaw-dropping glory, and captioned it, “We're ready for you @kimhidalgo!!" She also posted another photo of herself with Droke and Buckner, with the caption “Sisters 4 Life.” Hudgens, meanwhile shared a couple of sassy pics of her with several of the bridesmaids (one of which she’s giving the finger in, no lie) and added the caption, “Well I was in a mood wasn’t I? Lol best time ever at @kimhidalgo wedding. Congrats to the newly married couple!!!” But without a doubt, the best social media post from this whole shebang was a selfie of Tisdale and Hudgens, which Tisdale shared in her Instagram Story. What can I say? I’m a sucker for some nostalgia.

It’s worth noting that Hudgens and Tisdale weren’t the only stars in attendance to watch this celeb couple tie the knot, either. Desperate Housewives actor Shawn Pyfrom and Modern Family star Sarah Hyland were also there to celebrate the couple, according to The Knot. (Fun fact: Did you know Hyland auditioned for High School Musical 3? Hollywood is such a small world.)

It’s safe to say that High School Musical fans are probably living for Tisdale and Hudgens being bridesmaids together, but let’s be real — this is not the first time they proved that their friendship is built to last. They’ve had epic dance parties together, enjoyed casual memorial day barbecues together, and they even compliment each other on social media (Tisdale once described Hudgens as “beautiful, free, and talented” #dead). They also support each other in their careers — Tisdale went to see Hudgens make her Broadway debut in Gigi, and Hudgens told her followers to go see Tisdale in Scary Movie 5. Hell, they even attend Lakers games and sing duets on Tisdale's YouTube channel together. Once a Wildcat, always a Wildcat, apparently — and I for one am so here for it.

More like this
When Are Ariana Grande & Dalton Gomez Getting Married? Here's The Reported Tea
By Corinne Sullivan
Clare Crawley Clapped Back At A Troll Who Said Dale Moss Should Dump Her
By Candice Jalili
Matt James & Rachael Kirkconnell Are Reportedly Not Speaking For A Sad Reason
By Candice Jalili
Stay up to date