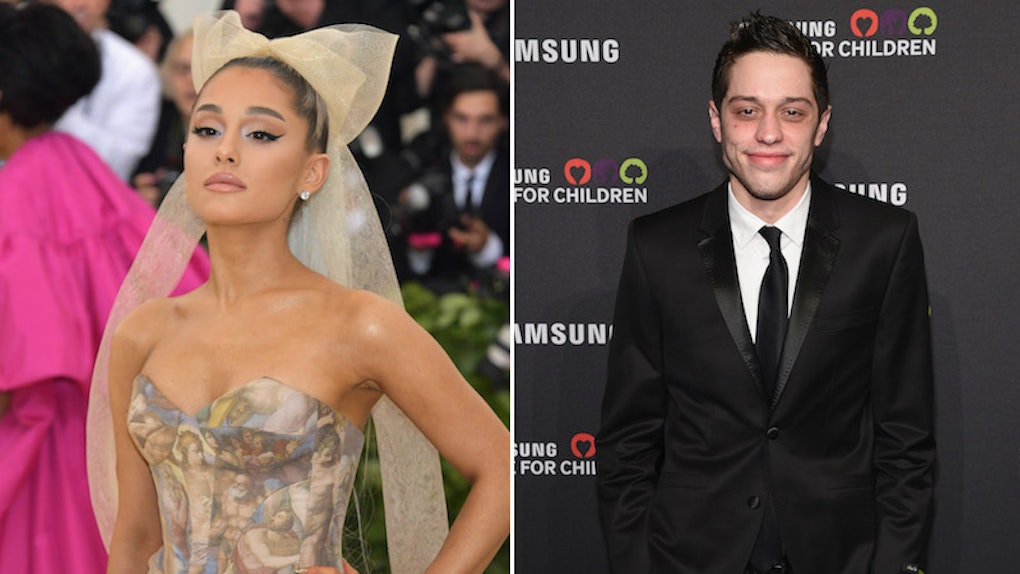 Love moves fast in Hollywood and if you aren't up to hang on to Ariana Grande's ponytail for the ride then make room for the rest of us who can. The "No Tears Left To Cry" singer turned heads when reports broke that she and Saturday Night Live star Pete Davidson began dating right after her breakup with Mac Miller. Now, they're apparently posting pics together as if it ain't no thang. How Ariana Grande and Pete Davidson celebrated Memorial Day was simple and super cute, confirming "hell yes" they're together and they don't care what you think, either.

Fans were initially devastated to find out Grande and Miller called it quits after two years of dating, but rebounded just as fast when they heard about her reported romance with Davidson. On May 21st, E! reported the young comedian and superstar pop artist just started hanging out and it's "casual." Since then, eagle-eyed fans have been keeping an eye out for clues to figure out how serious they really are. Some think they've spotted matching tattoos, and Grande definitely has started commenting on Davidson's Instagram. The most recent evidence comes by way of their Memorial Day post on Grande's Instagram story, featuring both of their hands roasting marshmallows by a fire.

Seems innocent enough, but what's going on with Mac Miller?

While Grande and Davidson cozy up, Mac Miller is dealing with the fallout of his reported arrest. According to TMZ, Mac Miller was driving under the influence in the early morning hours of May 17th when he allegedly knocked over a power pole with his 2016 G-Wagon. An eyewitness says he saw the rapper and two passengers flee the scene on foot. Police officers identified the car by the license plate and tracked Mac Miller down at his home where he reportedly admitted to drinking an driving.

Following the accident, Grande posted a mysterious tweet that said, "Please take care of yourself."

Elite Daily reached out to Mac Miller's team for comment on the accident but did not hear back by the time of publication.

Prior to Mac Miller's arrest, Grande shared a sweet message on her Instagram story about her ex-boyfriend and their breakup. She posted a picture of herself and Mac Miller laughing with the message:

Hi! This is one of my best friends in the whole world and favorite people on the planet Malcolm McCormick. I respect and adore him endlessly and am grateful to have him in my life in any form, at all times regardless of how our relationship changes or what the universe holds for each of us.

She added, "Unconditional love is not selfish. It is wanting the best for that person, even if at the moment it's not you."

A source later told E!, "Ariana was holding Mac together for a long time and it wasn't a good relationship for her. She is in a very good place and very happy now."

And that happy place looks like making S'mores with Pete.

Some trolls initially shaded Grande and Davidson's relationship after learning Davidson was diagnosed with borderline personality disorder. However, Davidson quickly clapped back at haters posting a thoughtful message on his own Instagram story. He wrote:

i been hearing a lot of 'people with bpd can't be in relationships' talk. i just wanna let you know that's not true. just because someone has a mental illness does not mean they can't be happy and in a relationship. it also doesn't mean that person makes the relationship toxic. everyone is different and there are a lot of treaments for mental illness and i have done / am doing them. and i encourage those who struggle to seek help as well it has changed my life for the better.

The truth is, it doesn't matter what anyone else thinks and Grande and Davidson's relationship looks sweet as S'mores from here.

Keeping my eyes wide open on that Instagram feed for any updates.