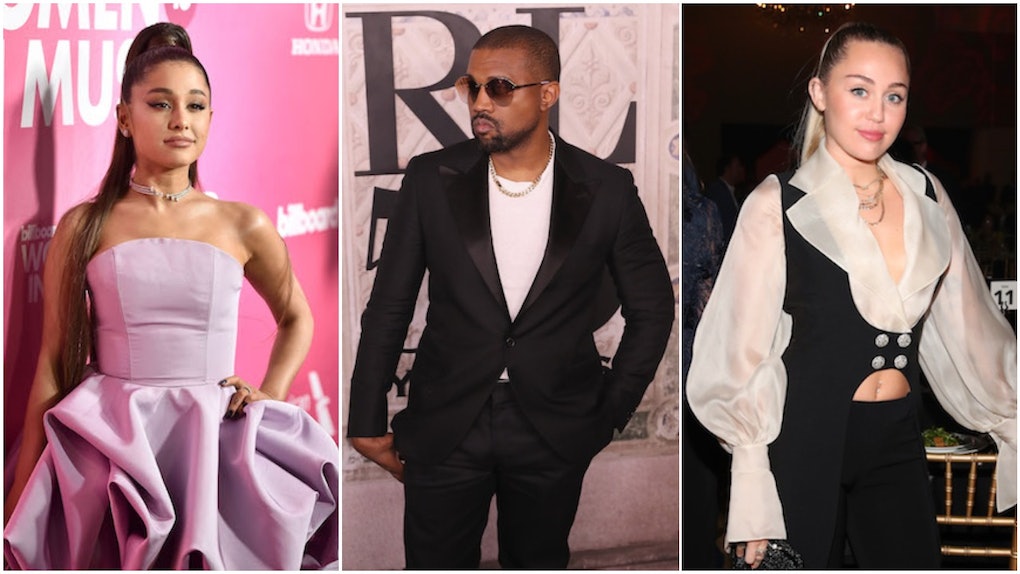 You've gotta hand it to Ariana Grande. No matter what life throws at her, she somehow proves, time and time again, that she is the unadulterated queen of pop. And guess what? She's not here for your drama (looking at you, Kanye West and Drake). Another boss lady who's happy to shut down the petty BS? Our girl Miley Cyrus. That's right, fam, Ariana Grande and Miley Cyrus' reactions to Kanye West and Drake's feud will make you want to give them both a massive round of applause.

So, to make a long story short, all eyes were on West — and Ariana Grande was not feelin' it.

The "God Is A Woman" singer took to Twitter herself and decided that West should pipe down because the release of her new song, "Imagine" would be dropping hours from the time that West went on his Twitter spree, and that Miley Cyrus was going to be dropping new music, too.

"Guys, i know there are grown men arguing online rn but miley and i dropping our beautiful, new songs tonight," Grande tweeted. "So if y'all could please jus behave for just like a few hours so the girls can shine that'd be so sick thank u":

Oh, SNAP! Ariana absolutely went there, and her tweet is literally making my heart soar.

Just minutes after Grande tweeted asking for the men to "behave," Cyrus responded in a similar vein, writing, "Didn’t they hear the news ?! War IS over ! Thank you , next!" alongside a rainbow of heart emojis:

Talk about a total Girl Power move right there. They're only three singers away from becoming a memorable girl group themselves.

If they're accepting applications, I'd make a pretty great Ginger Spice. Just throwin' it out there!

But honestly, the men should listen to what the women have to say, because both Grande's "Imagine" and Cyrus' "Happy Xmas (War Is Over)" are both absolute gems and worthy of hitting pause on a feud.

You can listen to Ariana Grande's "Imagine" below:

And you can listen to Miley Cyrus' "Happy Xmas (War Is Over)" below:

So, guys. YOU tell me. Aren't these songs worthy of overlooking a spat between two (and potentially more) rappers? Let's put the drama aside and focus on the music for once, shall we?

More like this
These Tweets About Ariana Grande Joining 'The Voice' As A Coach Are All Over The Place
By Michele Mendez
When Are Ariana Grande & Dalton Gomez Getting Married? Here's The Reported Tea
By Corinne Sullivan
Olivia Rodrigo's Reaction To Getting Her First Parking Ticket Was Priceless
By Brandy Robidoux
Stay up to date