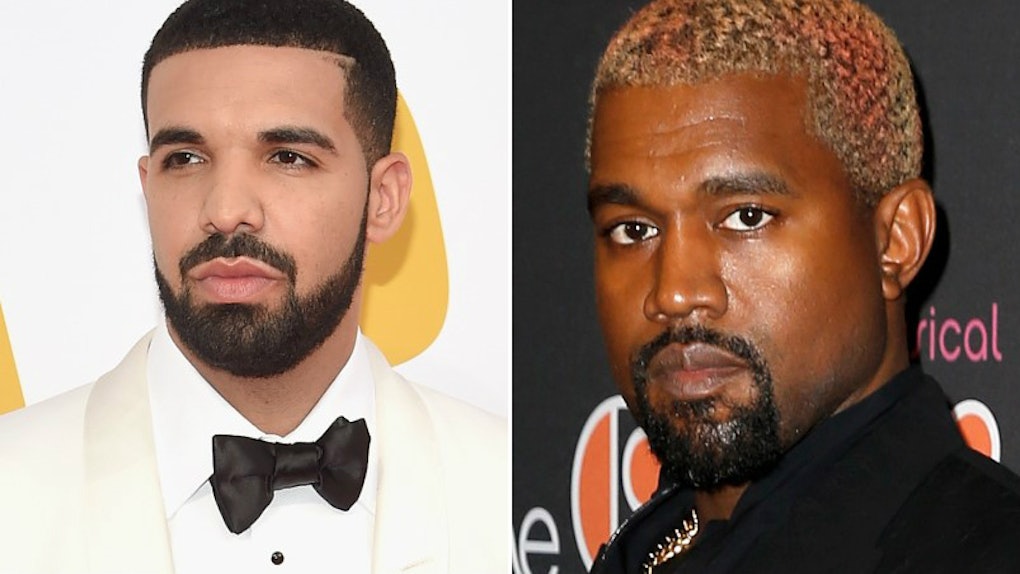 Kanye West and Drake are at it again. The two rappers have been feuding for quite a while and now they’re both opening up a new can of worms. And, of course, everyone’s eating it all up. After receiving a request for clearance from Drake for a track called “Say What’s Real,” West unleashed a series of tweets demanding an apology. Drake’s reaction to Kanye West’s tweets is actually quite surprising. Elite Daily reached out to West and Drake’s team for comment, but did not hear back by the time of publication.

In West’s tweets, he demanded an apology from Drake for dissing his Yeezy brand and for being friendly with the Kardashian-Jenner family behind his back.

“Still need that apology for mentioning the 350s and trying to take food out your idols kids mouths,” West tweeted before saying he’d been trying to get in touch with Drake for some time. “Been trying to meet with you for 6 months bro … You sneak dissing on trav records and texting Kris talking bout how’s the family.”

To further emphasize his desire for some kind of reconciliation, West reiterated that he wasn’t the one who told Pusha T about Drake’s kid.

“I told you I ain’t tell Pusha about your son,” the rapper wrote. “It’s all love bro bro but don’t play with me. You stay too close to be playing all these industry games bro.”

So, while demanding an apology, West was also making accusations. Then he went on to talk about how he would never intentionally hurt Drake.

“I would never intentionally try to hurt you bro,” he continued. “I never even heard none of the diss records … That ain’t my MO never did a diss record … This ain’t about who could pay to have something done to somebody … This man to man bro … This been bothering me too long.”

And there’s plenty more where that came from. Needless to say, West had a lot on his mind and laid it all bare for everyone to see. And Drake definitely saw. He posted his reaction to his Instagram Story shortly after.

Check out Drake’s reaction to Kanye’s tweets down below:

Yikes. That's probably not the reaction West ultimately wanted. But everything was smoothed over in the end. So, how did it all turn out? Well, Drake eventually apologized, at least according to a tweet from West.

Here’s a look at some of West’s Twitter meltdown:

Back in September 2018, it was West who was doing the apologizing. And he apologized for basically everything under the sun.

“Let me start by apologizing for stepping on your release date in the first place … We were building a bond and working on music together including squashing the issues with Cudi at our office,” West said in his multi-tweet apology.

So, there’s a lot of history between Drake and West that needed to be aired out. With any luck, Drake’s supposed apology and West’s tweet storm will bring some change to their relationship!