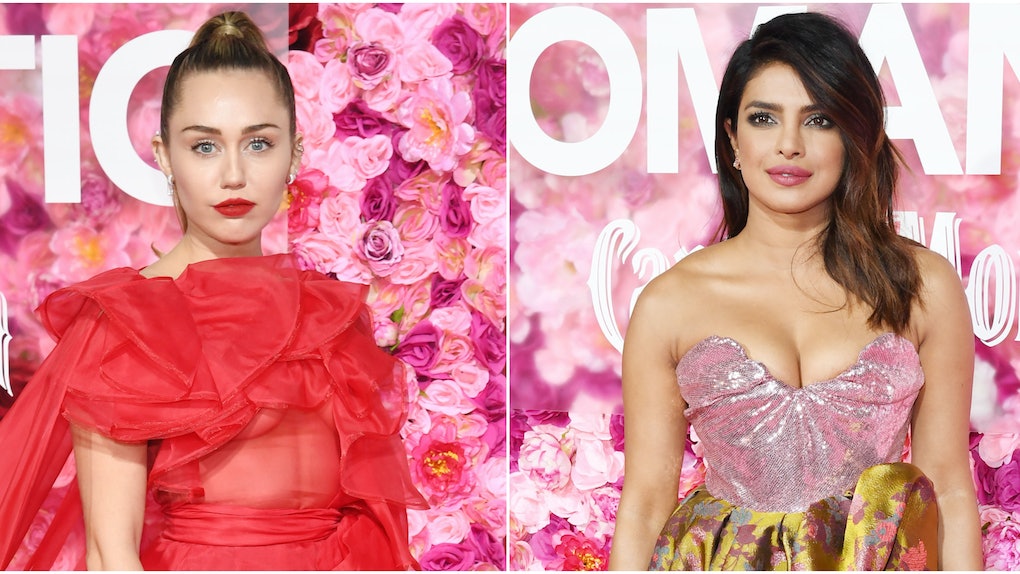 Are Miley Cyrus & Priyanka Chopra Friends? Miley's Past With Nick Jonas Is No Biggie

Laverne and Shirley. Thelma and Louise. Miley and Priyanka? Of all the iconic female duos and friendships that we've seen over the years, this is one friendship I certainly want to see blossom some more. The two young starlets have only recently begun to cross paths with one another, so many may be wondering, "Are Miley Cyrus and Priyanka Chopra friends?" And, to that, I say all signs point to yes. The pair recently attended the premiere of the romantic comedy film Isn't She Lovely last month, which stars Chopra opposite Cyrus' husband Liam Hemsworth. And after the event, Chopra and Cyrus made their friendship social media official, as any pair of friends in today's society must do.

Earlier this month, Chopra's makeup artist Pati Dubroff posted a picture on her official Instagram account that featured the glowing actress modeling the look she crafted for her to rock at the Oscars' Vanity Fair afterparty. Cyrus took the time to chime in and comment on the picture, writing, “Pretty! Love,” alongside a blue heart emoji. The supportive interaction had fans of both Cyrus and Chopra beaming with joy. Now you might be asking yourself why such a kind and minuscule comment is creating such buzz, and that indicates that you may need a little pop culture refresher.

Chopra recently married Cyrus' ex-boyfriend Nick Jonas in December 2018 but don't fret — there's no bad blood or girl code being broken here. Cyrus and Jonas dated all the way back in 2006 and though they went through a very public breakup that many believed would end their friendship permanently, Jonas recently praised his ex, proving that they are on good terms.

Speaking on Apple Music's Beats 1 radio show on March 4, Jonas shared, "She's a real singer. But we knew that because we grew up with her." The Jonas Brother's singer also revealed that his favorite JoBro's song even includes a guest appearance from Cyrus. He shared, "We had a song with her back in the day called 'Before the Storm,' which is my favorite catalogue song of the Jonas Brothers." He continued, "And at that point she was 16 and she was singing her a*s off."

But Cyrus and Jonas weren't always on good terms however, given the fact that Cyrus penned her 2008 hit "7 Things" about the boy band singer. Featuring lyrics like "You're vain, your games, you're insecure. You love me, you like her," and, "You make me laugh, you make me cry, I don't know which side to buy," Cyrus turned her heartbreak into a song calling out Jonas.

But as the years went by, Cyrus and Jonas both matured and each found love in other places. Cyrus married her longtime love and The Last Song costar Liam Hemsworth in an intimate wedding at the end of December 2018, similar to Jonas and Chopra who tied the knot at the beginning of the same month. However, compared to Cyrus and Hemsworth, Jonas and Chopra had an elaborate ceremony that was followed by other smaller celebrations afterward.

And though Cyrus and Chopra aren't exactly the definition of best friends (for now at least), I for one can't wait to see if more social media interactions await the pair that I am now deeming as Hollywood's next biggest friendship.

More like this
I Tried Singing While Running Like Miley Cyrus & OMG, My Lungs
By Rachel Varina
How Many Tattoos Does BTS' Jimin Have? His Collection Is Growing
By Michele Mendez
Are BTS & Coldplay Collaborating On A Song? Here's Why Fans Think It's Happening
By Michele Mendez
Stay up to date