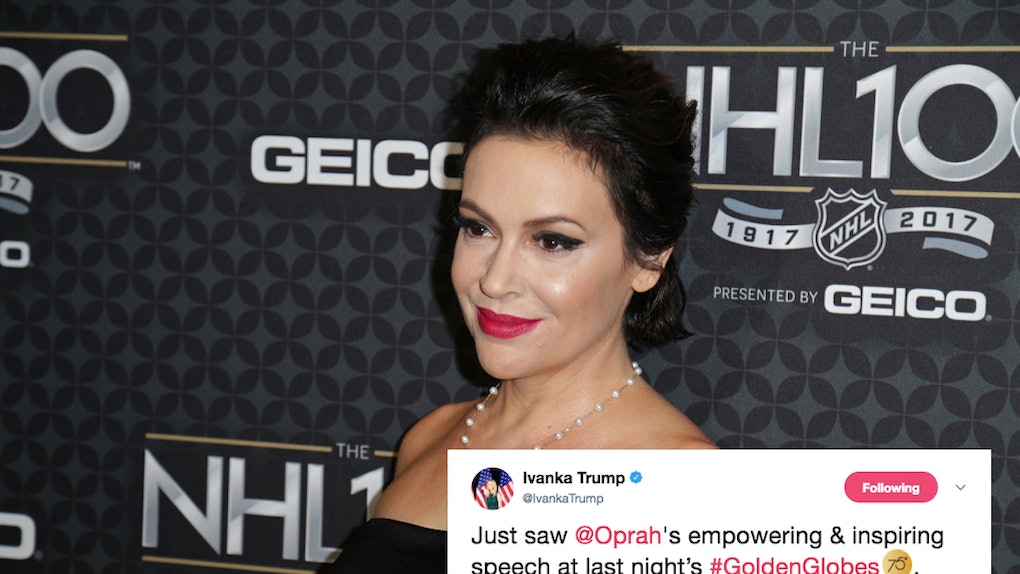 Oprah's rousing and inspiring speech at the 2018 Golden Globe Awards is getting a ton of media attention in more ways than one. Most recently, Ivanka Trump decided to retweet a video of the speech and applauded Oprah for bringing attention to sexual misconduct and harassment. But not everyone seems to think this praise from the first daughter is fitting — and for good reason. And what better way than for another public figure to call her out. Alyssa Milano's tweet about Ivanka Trump is seriously vocalizing what everyone is thinking about this issue.

If you haven't watched Oprah Winfrey's incredible speech that she gave while receiving the Cecil B. DeMille Award at this year's Golden Globes on Jan. 7, where have you been? The speech, which heavily focused on the issue of gender inequality and sexual abuse in both the entertainment industry and beyond, was so electrifying that it had the general public asking for an Oprah 2020 presidential bid. It would be hard to find someone who wasn't inspired by the speech. Even members of the White House took notice — namely adviser to President Donald Trump, his eldest daughter Ivanka Trump. On Jan. 8, she re-tweeted a clip of the speech posted by the official Golden Globes Twitter account and lauded Oprah for promoting the #TimesUp movement. In the tweet Trump wrote,

And it got, uh, a lot of criticism.

People were not happy about the tweet. But one comment in particular stood out, when actress Alyssa Milano fired back at Trump for the tweet, urging her to put her money where her mouth is. She wrote,

Great! You can make a lofty donation to the Time's Up Legal Defense Fund that is available to support your father's accusers. https://www.timesupnow.com

It's kind of the perfect response: if Trump is serious about taking a stand against harassment and abuse, she has a very simple path to take. Milano is of course addressing the elephant in the room when it comes to Trump commenting on combatting sexual abuse: the fact that her own father, the president of the United States has been accused of sexual misconduct by multiple women, yet has virtually received zero consequences for it.

19 women have come forward and accused Donald Trump of sexual harassment and abuse over the course of his career spanning decades. Trump has denied these claims, and in fact the official White House stance is that all of the women are lying. In the meantime, the president has taken opportunities to criticize and condemn other sexual assault allegations that have come to light in Washington, but only if those politicians accused don't support his politics.

So this tweet might be the most on-point response that we've seen to Trump's tweet yet. The Time's Up movement aims to help women who need their voices heard and provide them with the legal resources they need to legitimately be heard in court and have justice be served. And Milano is urging Trump, if she's really serious about supporting women, to go ahead and donate a whole bunch of cash to help them — including the women that have accused her father of sexual misconduct.

So clearly, Twitter users and public figures alike are not letting this hypocritical stance that Trump has taken go unnoticed. So if Trump actually wants to make a statement in support of the Time's Up movement, she can address the issue that's literally closest to home. Milano really hit the nail on the head with this tweet right here, and I couldn't think of a more appropriate response.