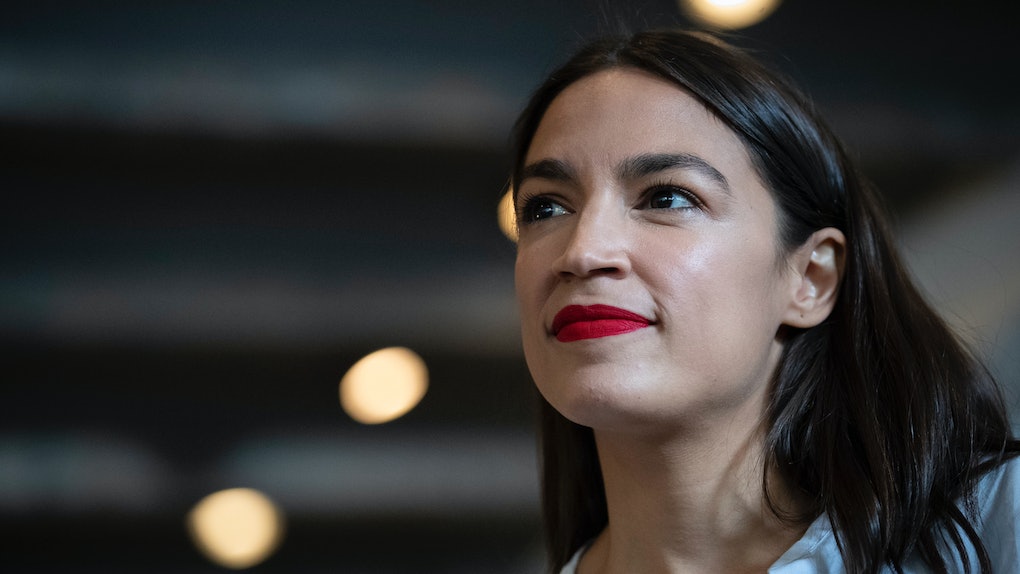 Alexandria Ocasio-Cortez's Comments On Birth Control Include An Interesting Proposal

There are understandably a lot of takes on birth control. While some people are totally down with contraceptives, others have nearly waged war on them. For her part, Rep. Alexandria Ocasio-Cortez (D-New York) is among the former — and now she's speaking out on open access to birth control. Alexandria Ocasio-Cortez's comments on birth control access say that it should be easier for people to get the contraceptives they need for free. Excuse me while I start the slow clap.

The New York representative opened up about the matter in a tweet shared on Friday, June 7. She wrote, "Psst! Birth control should be over-the-counter, pass it on." In a follow-up tweet, Ocasio-Cortez added, "(It should be free, too - like in the UK!)" In the case of the United Kingdom, women are able to receive contraception, including three kinds of birth control, for no cost, according to Newsweek. Contraceptives are available at community contraceptive clinics and sexual health clinics around the country. Doctors also give them out to patients.

Obviously, Ocasio-Cortez is ready for the United States to catch up to the UK, and had no problem announcing it. Here's a look at her tweets:

Leave it to AOC to let the world know the things she truly believes in. The comments come as the Trump administration proposed rules to chip away at Title X, a federal program that provides funding for birth control and other services, by imposing restrictions that limit access to health care. But the comments might not be surprising, given Ocasio-Cortez has really been speaking out about reproductive issues as of late.

On May 16, just a day after Alabama signed a bill into law that bans almost all abortions, including in cases of rape or incest, Ocasio-Cortez posted a fiery tweet saying abortion bans are about "controlling women's bodies."

Ultimately, this is about women’s power. When women are in control of their sexuality, it threatens a core element underpinning right-wing ideology: patriarchy. It’s a brutal form of oppression to seize control of the 1 essential thing a person should command: their own body.

Days before, she slammed Georgia's abortion bill that's a near total ban since it outlaws abortions once a fetal heartbeat is detected, which is around the six-week mark — before many people even know they are pregnant. The new strict abortion laws are said to be a part of a larger strategy by anti-abortion advocates to get the conservative-majority Supreme Court to overturn Roe v. Wade, the 1973 landmark case establishing abortion rights.

"Most of the men writing these bills don’t know the first thing about a woman’s body outside of the things they want from it," she tweeted on May 8. "It’s relatively common for a woman to have a late period + not be pregnant. So this is a backdoor ban."

You can agree or disagree, but cheers to Ocasio-Cortez for speaking out about the things she believes in.